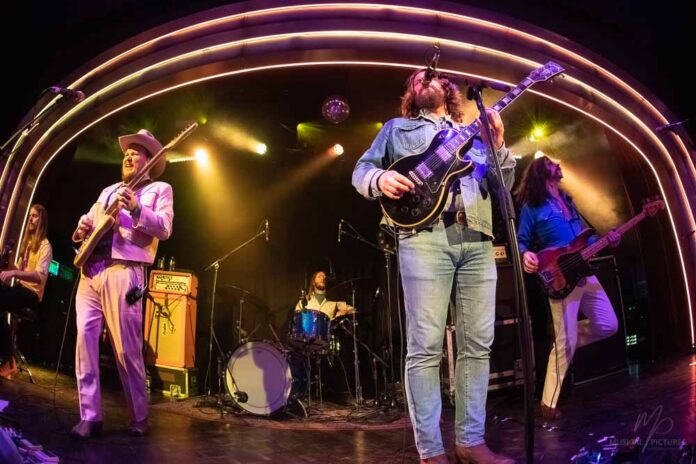 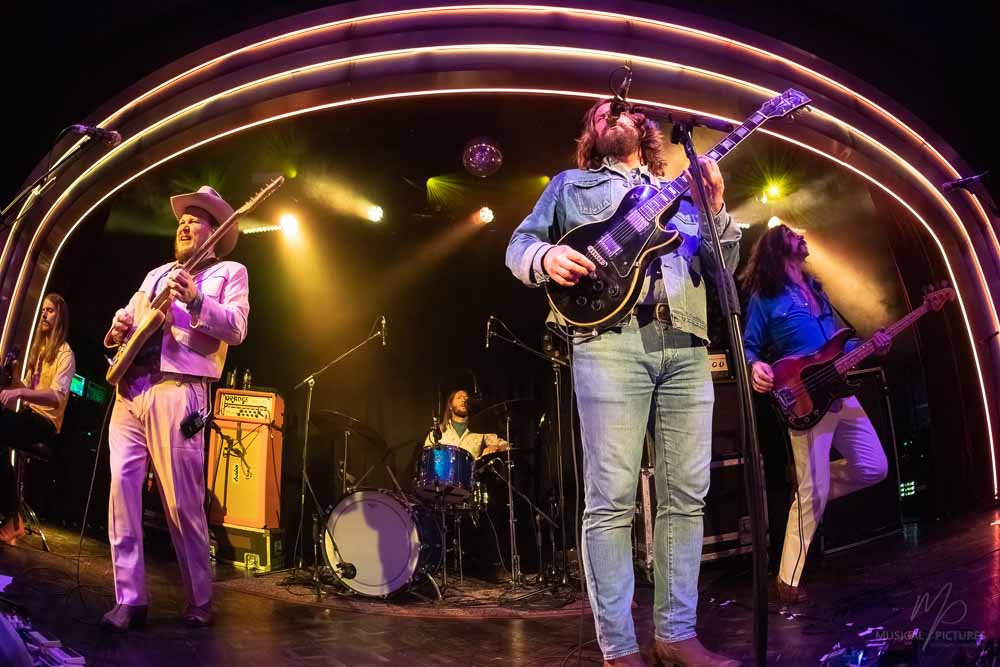 I first saw The Sheepdogs a number of years ago. They were the support act for an up-and-coming gravel-throated rock band, The Temperance Movement. The venue was Shepherds Bush Empire, which seemed comically appropriate. I made sure I was there early because word among the Temperance Movement fanbase was that The Sheepdogs were not to be missed. The word was right. The band made many friends that night.

Roll forward a few years, and, (with frequent other trips in between), they’re back. For a while it’s been headline tours, and whilst the rooms are a little smaller, you really can’t fault where we find them tonight. Lafayette is a purpose-built new music venue tucked behind London’s Kings Cross station. It’s owned by multi-instrumentalist Ben Lovett, of Mumford & Sons fame. In an era when performance spaces are closing their doors all over town, it’s refreshing to see that trend at least partially reversed. Lafayette opened its doors in March 2020, just as the Government was mandating they immediately be closed again. So, although the venue has technically been open for two years, this is my virgin attendance.

First impressions are very favourable indeed. Buried in a concrete shell, a couple of storeys underground, it seems the ideal place to spend time given current geopolitical uncertainties. There’s a total absence of network signal too, so it’s impossible to get pinged with depressing news. Perfect. It’s got an upstairs, a downstairs, a decent height stage and a rather fetching lit proscenium arch. The stage looks not unlike that at Omera, just over the river by London Bridge. It ought to. Lovett owns that one too.

I’m here early enough to catch a full set from tonight’s support artist, Andrew Cushin. He’s a young, slight, unassuming figure I’ve not heard before and he holds a solitary acoustic guitar. He looks as though he might have spent the day playing lazy Dylan covers in and around the London Underground, so when he first lets rip, it’s a revelation. Opening song Get Me Out Of This Town showcase his playing and vocal skills; both of which feature an abundance of nuanced phrasing and great control of dynamics. He’s got my full attention right off the bat. 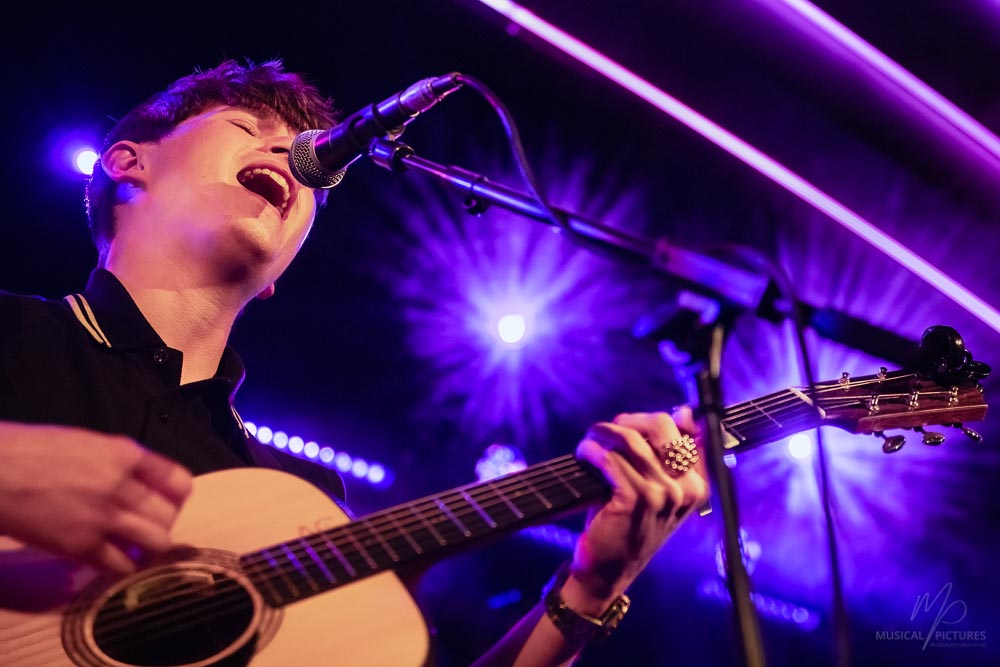 It turns out Cushin also has a fun and friendly personality and he’s very comfortable chatting between the songs. He’s from Newcastle and is carrying a strong Geordie accent. Hang on a minute, you cry. A young, personable singer/songwriter/guitarist from the North East? I’d call him ‘The next Sam Fender’, but if I did, I’d probably be the 300th person to do so this month. So, let’s ignore the pachyderm in the auditorium, and instead concentrate on the performance.

My highlight by far is Four And A Half Percent, a highly personal and deeply moving song detailing a childhood growing up around a dysfunctional father who was lost in a world of alcohol addiction. Cushin warns us in advance that if he starts crying, we can throw things at him. I guess you use humour to mask some of the pain, but my word it’s a powerful song and demonstrates a songwriting maturity way beyond his years. Andrew Cushin deserves to be a major, major name and I really, really hope he gets there.

There’s not much to shift around after a solitary acoustic guitar and mic and following a refreshingly short break, The Sheepdogs emerge to a wall of applause. The cap in this place is 600 and if we’re not at it, it must be close because there’s not a lot of room to move around.

The band are a five-piece from Saskatoon, Saskatchewan, which is even harder to say than it is to type. It’s probably easier to say ‘Canada’, if slightly less geographically precise. I’m stood next to some fanatical Canadians here for the show, two of which flew over specifically for the tour. You might think that extra special fandom, but the last time I saw The Sheepdogs in London (Dingwalls, so this is a definite step up), I was stood next to a Canadian couple who were also bouncing from venue to venue with the band. In fact, The Sheepdogs really do have a cult following, especially in North America where they were the first-ever unsigned artists to feature on the cover of Rolling Stone and are regular attendees at music award shows. In the UK, they might just about be the biggest band you’ve not heard of. 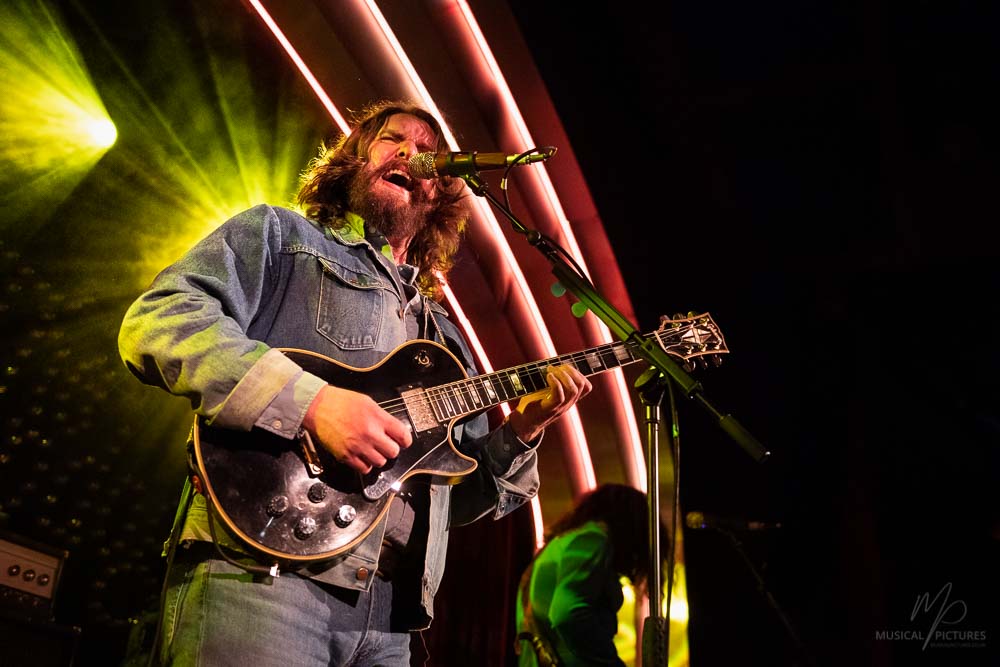 The music is twin guitar-based rock, served with a portion of grits. Often, it’s in beautiful harmony, along the lines of The Allman Brothers, Eagles and Thin Lizzy. Sometimes they duel, residing firmly in the Lynyrd Skynyrd wheelhouse. To pull this off, you need a pair of great guitar players. Centre stage is Ewan Currie; frontman, vocalist and one half of the 12-string team. To his right is Jimmy Bowskill, a guitarist of real repute. At age eleven, he played on Jeff Healey’s stage in Toronto and Bowskill has also toured with both Joe Bonamassa and Jeff Beck. He plays in a full cowboy suit complete with Stetson. It must be boiling in there. 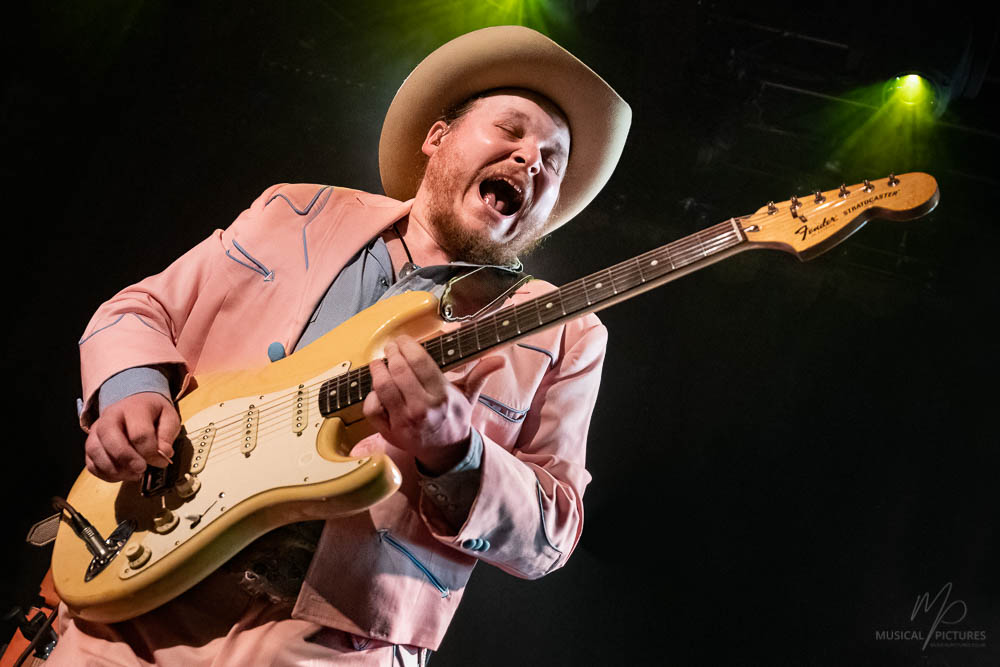 The band open with How Late, How Long, a tune from their eponymously titled album recorded in 2012, shortly after they signed to Atlantic Records. Everyone knows it, everyone throws their hands in the air and everyone yells the words. It’s got the harmonies, it’s got the duelling solos, it’s got a great little riff. We’re in for a good time.

Of course, the pandemic caused the band to fall silent for a while and the last full-length album from The Sheepdogs came in 2018. They did record a six-track EP, No Simple Thing last year, and we get a bunch of tunes from that this evening. This is good because perhaps as an antidote to the misery of Covid, No Simple Thing is a blast from beginning to end.

The focus for most probably is the twin guitar players but the rest of the band pull it all together. Stage left is Ryan Gullen, a mop of hair and whispy Frank Zappa moustache with a Fender Precision slung underneath. He frequently throws shapes and joins Bowskill on the other side of the stage. The beats are nailed down with the assistance of Sam Corbett behind the drums.

Stage right, sat behind the flag of Saskatchewan Province, sits the understated presence of Shamus Currie – brother to Ewan. The two of them have recorded together under the moniker BROS, a significantly less famous if somewhat more musically credible alternative to twins Matt and Luke. Shamus is an enigma. He plays keys that burble under the surface and a languorous tambourine in the style of Liam Gallagher during one of Noel’s vocal performances. And then on the song Help Us All he plays the trombone centre stage; in one move getting the crowd super whooped up and giving The Sheepdogs a rather special USP. At the end, one of the Canadians yells: “Well done Shamus, now rock the shit back out of that tambourine!”

The band certainly give value for money. A 17 song setlist spans the best part of two hours and then they give us a three-song encore: the instrumental delights of HMS Buffalo and Kiss The Brass Ring followed by another massive crowd favourite, I’m Gonna Be Myself. The audience sing-along in the same enthusiastic manner with which they started. The show ends and I say goodbye to my new Canadian friends as we climb the stairs to the exit. The queue for the cloakroom is fierce but as mobile phone reception returns at least I can still see London through the windows.

The Sheepdogs have now concluded their run of shows in the UK. The band play a few selected European dates in May and have one 2022 UK festival appearance at Red Rooster, Suffolk on 3rd June.