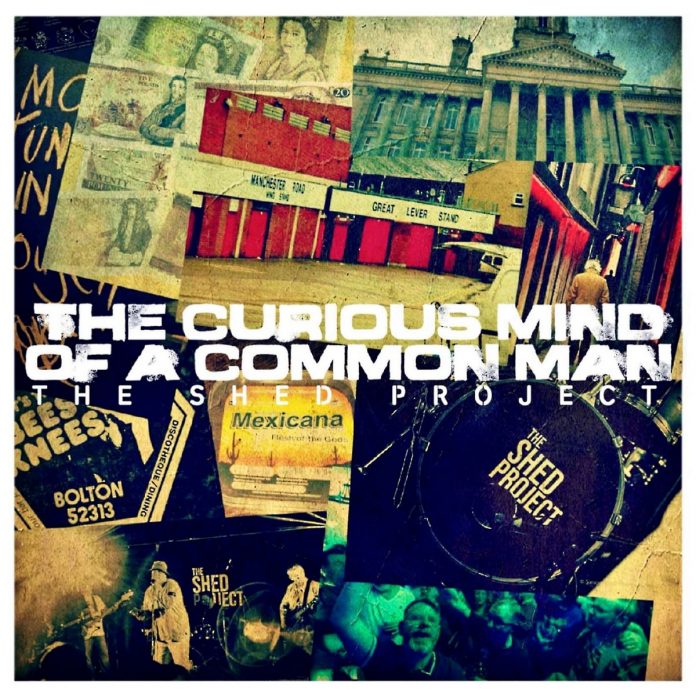 The Shed Project: The Curious Mind Of A Common Man

The Shed Project release their debut album The Curious Mind Of A Common Man on April 29th following a steady flow of well regarded singles over the last couple of years.

Following matrimonial discord I swore that Bolton was a place I’d never revisit nor have anything ever to do with again. I’m willing to make an exception for The Shed Project though and willing to put any prejudices to one side. Formed in Bolton in 2018, the band consist of Roy (Vocals) John (Rhythm) Tim (Bass) Olii (Lead) and Shane (Drums). Initially it was John and Roy who got things going in Johns Garden Shed, hence the name. Previously a couple of them had been in The Attics, who were formed in… well you figure it out. The band have built up a solid and loyal fan base with a strong reputation via single releases, live dates; and interactions on social media.

The band have been championed by Louder Than War for some time with John Robb and Sam Lambeth both writing about them. They first come to my attention last year when the
2020 single Bedtime was being re-issued to create awareness of their local Mental Health and Addiction organisation, WhysUp. Bedtime had been written by the frontman after
his Mum was diagnosed with cancer and given 4 months to live; and at the same time he found out his brother was a heroin addict. The single was re-recorded with the plan being that a negative in Roy’s life could be turned into a positive. That alone made me realise there was something a little bit special about these guys.

After hearing previous singles, most of which are included here, buying the album was a no-brainer. The quality The Curious Mind Of A Common Man, written, played, produced and even sold (if you know where to look) by the band was never going to be in doubt. These blokes of a ‘certain age’ have complete conviction and belief in what they are doing and a passion for music. Who can blame them?

Kicking in with the epic Modern Way, it’s such a confident start, the minute long intro is a middle-eight that most bands would kill for and possibly the best opening to an album for a while. It’s a politically charged piece which extolls the virtues of friends and community while reminding the listener that the Government don’t have anyones interests at heart. I’d go as far as far as saying there was a touch of The Redskins about it, if not musically, in spirit. This is followed by A Day In The Dam, written about Roy’s drugged up Amsterdam adventure; and My Life which LTW described as ‘a fantastic vignette of triumph, defiance and contentment. A snapshot of working-class life, beating the bullies and having the scars – both emotional and physical – to prove it.’

The Curious Mind Of A Common Man is steeped in Manchester’s (fairly) recent past. The Shed Project clearly have a love for the late 80’s and early 90’s sound with influences of Northside, Happy Mondays, Stone Roses with hints of the likes of Milltown Brothers and Flowered Up in the mix for good measure. These are very much influences though and never cross the boundary into pastiche, this isn’t a band trying to recreate a bygone era. Temptation is a new song, a bass driven track cautionary tale of excess while Sal, is a stripped down tender love song for Roy’s wife. It’s unlike anything else on the album, but it’s one of the highlights.

Previous releases follow. Lucky Number, an almost perfect three minute pop song; the aforementioned moving and poignant Bedtime and their debut single Livin. Whilst Livin fits in with the albums general tone of celebrating what you have and living your life, it’s possibly also the weakest in comparison to the singles that have followed and the newer tracks but a yardstick in how far they’ve come. It jars a little with the next track; riff heavy wah wah freak out which carries Don’t Wait For No One.

The album then closes on another run of singles, the funky One Shot (which in an alternative single world also featured Nicky ‘MC Tunes’ Lockett) with it’s mantra “You’ve gotta live your life”, the Stone Roses-esque Feel My Love, before closing on a full length version of recent single Friend. It’s a celebratory guitar laden piece and worthy of being a set closer. If Feel My Love is ‘Stone Roses’ then Friend is ‘The Second Coming’.

The Curious Mind Of A Common Man is terrific album for the times, it’s another for my Top Ten of 2022. It’s political, it’s positive, it’s tender and it’s life-affirming. Check it out!