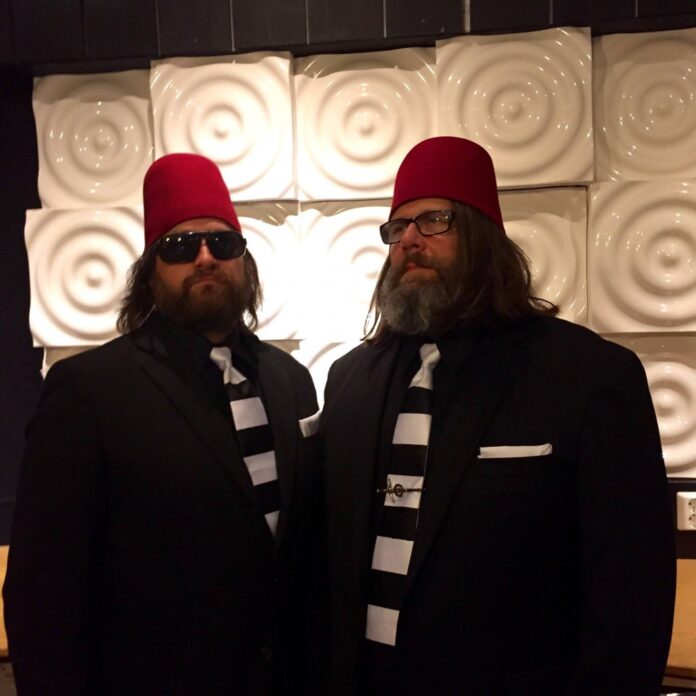 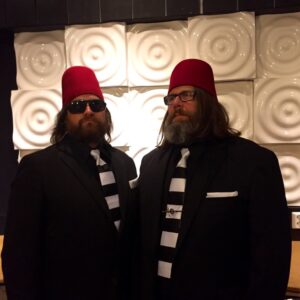 As they shuffle on stage dressed in red shirts, carpet slippers and battered red Fez’s the two stout men from The Shanks look like the Hairy Bikers on a gig going day out.

When they plug in though, something quite magical happens as the band somehow make huge songs out of their unconventional approach. With just a bass and drums they celebrate their tenth anniversary compilation album with a diversity that is surprising with their stripped down assault. They make this happen with an intelligence to their songwriting that combines great melodies with some great playing. Decades of being immersed in the magic of vinyl and record collecting leak out in a set of great songs.

The bass is a combination of neo-Lemmy chords and lead runs that manages to make you forget that guitars ever existed – there is so much that can be dredged froma bass guitar and the dredging starts here – the grinding sound fills the space and makes sense of the dynamics and when it’s locked in with the wonderful drums it creates a powerful energy that makes the songs really stand out.

The eccentric Canadian duo, who hail from Toronto, look like two members of a dance band gone wrong. Their Fez’s sway to the zig zag beat and their songs entwine with your mind. There is something great about this duo who are locked into a groove of their own.

Magical, dusty and weirdly wonderful The Shanks are the biggest band in the world in a parallel universe were red velvet carpet slippers matter, clip on ties are de rigeur and great, grouty songs sung my middle aged men with an IQ overload are cherished.