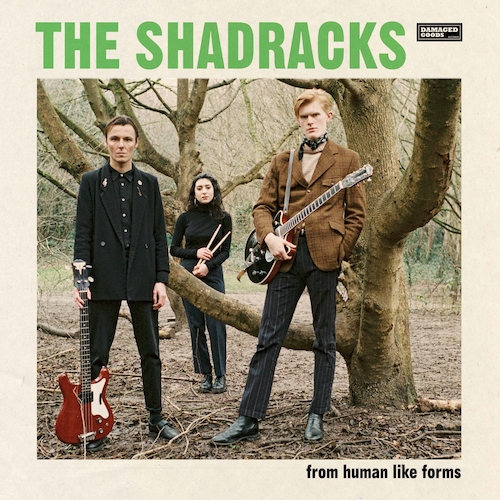 The Shadracks – From Human Like Forms (Damaged Goods Records)

Three-piece rock n’ roll group hailing from Medway, Kent.  Guitarist & vocalist Huddie Shadrack is son of punk and art icon Billy Childish, who also produced the album. This is the sound of his own, distinct niche being carved, with help from bassist Rhys Webb (from The Horrors) and drummer Elisa Abednego.  Ged Babey can’t decide between Post-Punk Garage or Post-Garage Punk as a new pigeonhole.  An album-of-the-year either way.

‘From Human Like Forms’ features fourteen tracks of taut, stripped-down garage punk that has the capacity to be as whimsical as it is stomping, the album sees The Shadracks achieving giddy new heights in their song writing and performing abilities.

This is true. This is excellent. I knew it would be.

If Billy Childish is God then Huddie is the Son Of.  And this is exactly how Jesus Christs Post-Punk Garage band should sound. So, Let us Pray.

Huddie is in the unenviable position of being potentially ‘the Julian Lennon of Garage Rock’.  But listening without prejudice and with as much objectivity as I can muster, From Human Like Forms is the sharpest, smartest, most darkly poetic Garage-Punk album around. Both irrespective of, and perhaps because of, the Childish bloodline that courses through it.

Don’t Let Go  a bassline adapted from Buzzcocks Whatever Happened To…?  Confident vocal. A simplicity and sharpness about the musical dynamics.

No Time  Nice backing vocal from Elisa. Cool gear-changes in tempo. A slight ‘Day I Beat My Father Up’ similarity and the ghost of Alternative TV hovers,

Barefoot on the Pavement  – certainly sounds other worldly with its moody, gentle guitar and slow brooding rhythm, evoking images of grainy sci-fi movies swamped in eerie mystery and intrigue.  It does remind me of East End eyeliner-punk proto-Goths Wasted Youth, which personally, can only be a good thing.

Pray  Lyrically it seems very dark and deep. The vaguest hint of Nirvana dynamics. The album is starting to sound like something special…

Count To Ten  The realisation hits that this is three people working very much as a really tight and incredibly powerful unit.  This is punk rock -Nuggets style,  but with an intensity and somehow a detachment…. contradictory as that sounds.

It’s All Undoing  Lyrically and vocabulary wise, the influence of BC, is apparent. Who else uses words like bestowed in a song.

You Are Adored   Sounds very like Nobody’s Scared slowed right down… no bad thing. The sound of so-called ‘post-punk’-during punk… alive and well. Lyrically goes from ‘moonlight floods your eyes’ to ‘dust fills your eyes’….

From Human Like Forms   I can see why this was chosen as the title track. Best vocal on the album. Great lyric, superb guitar. Just a wonderful, brilliant song full stop. Worth buying the album just for this track alone.

Did You Like It Then  Oddly a Flaming Stars vibe about this (cos of the bar-room piano) and a touch of the Bauhaus B-side about it!  The only track I, personally, don’t really like that much.

Delicate Touch   Rhys on top form! Incredible song – the existential poetry and ‘abject truths’ of the lyricism will keep us scratching our heads or nodding wisely.

Not Yet Been Erased   All three Shadracks completely on task on this track. Huddies vocal does have a tendency to drift out of key at times. Not that it matters…

No Time (Slight Return)   Perhaps not the best way to end the album.  A nice repetitious reprise with an Alternative TV vibe…

The influence of punks mavericks and thinkers Devoto, Vic Godard, Wire and Mark Perry is all over this album… which shows the band have great taste and are twisting and adapting old ideas in new and interesting shapes.  The only other band in the recent past who worked in this area were Neils Children. No surprise perhaps that Rhys is a good friend of John Linger from NC, now a member of Girls In Synthesis and reinventing post-punk with hardcore dynamics.

People in my age bracket are gonna love this album –  what younger people make of it,  I’d love to know. It has a dark, oppressive, bone-dryness to it. An aloofness and detachment personified by the main vocal sounding almost-bored at times.

The b-side of new single Pray is a cover version of Devoto-era Buzzcocks song Time’s Up.  It is absolute perfection. When Devoto later performed the song Boredom with Magazine, in the break where he would blankly intone the title or B’dum B’dum, he instead used the French synonym ‘Ennui’.

The Shadracks music is sharp and smart and vibrant, but their songs seem to me to contain an ennui (profound sadness) in the lyricism – which is what makes them twice as fascinating as most other garage bands.

That said, on the title track, the pinnacle of the album, Huddie Shadrack raises his voice and exclaims  ‘I’m feel like my life has finally begun!’

It has. And in style.

The Shadracks will be playing at the infamous Cave Club, at Moth in East London on August 13th to celebrate the release of the album. Tickets available HERE