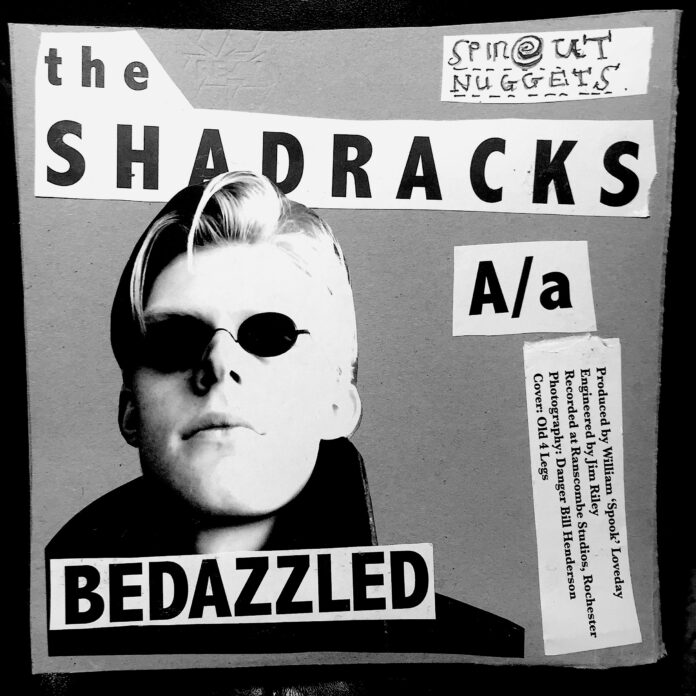 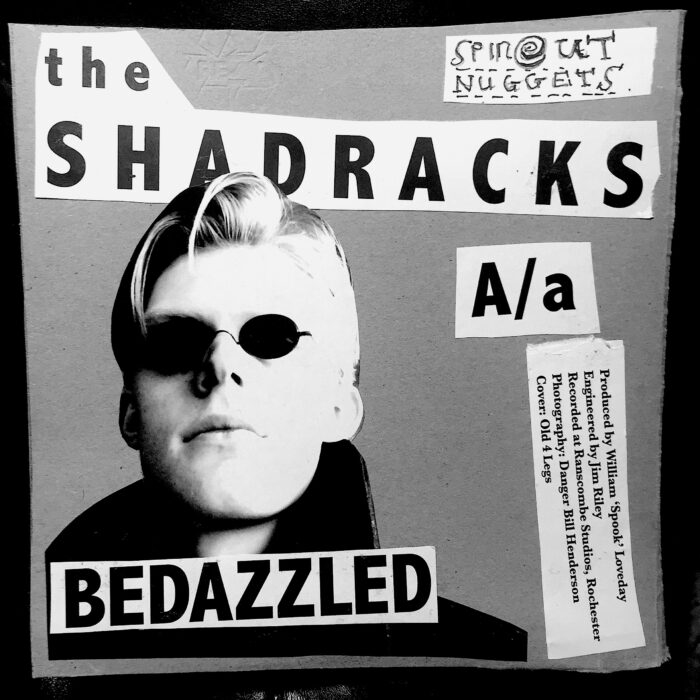 The Shadracks ‘From Human Like Forms’ was probably the most intriguing garage-rock album of 2021. It is being followed up with this limited edition single – just 500 hand-numbered copies: a solid gold, absolute classic piece of work on which the whole of the Hamper family get involved.

The song Bedazzled has been a long-time favourite of the astute music fan. In it Peter Cook invents a kind of nihilist Sprechgesang psychedelia which has never been bettered.

The 1967 British comedy movie ‘Bedazzled’, was written by Peter Cook, who played the lead role (the Devil) in a comic retelling of the Faust legend set in Swinging London. It co-stars Dudley Moore as the lonely sucker who signs away his soul to find love with the object of his desire.

One of the films highlights is when Stanley Moon (Moore) is transformed into a shiny-suited pop singer and performs a song ‘Love Me’ to screaming females fans. His glory is short-lived as he is followed by the enigmatic Drimble Wedge and the Vegetation (Cook in Devilish disguise, said to be based on Syd Barrett) whose unattainability makes him even more desirable.  The scene is on YouTube if you’ve never seen it, and for many, like myself, it’s the pinnacle of a superb film capturing Pete and Dud at their best and a 60’s surrealism that is unbeatable.

It was no surprise that the film is a favourite in the Billy Childish household. Billy holds the Blues in high regard and the Robert Johnson story of a deal with the Devil at the crossroads mirrors the legend of Faust also.

I asked Billy if he could ask Huddie, his son and singer guitarist with the Shadracks, if he could answer a few questions about his bands cover versions of both of the songs from the film.  I expressed surprise that a young man in his early 20’s knew of the film.  Billy remarked.

Bedazzled was part of his education along with Laurel and Hardy.

I asked H: Is Bedazzled a movie that you’ve liked for a while? What appealed to you about it?

I first watched Bedazzled aged 12, when I was enthralled by the ‘froony green eyewash’ scene; It’s a swinging 60’s cult classic with the added benefit of its’ two protagonists, Peter Cook and Dudley Moore being two of my favourite comedians.

Have you seen the re-make with Elizabeth Hurley in the Peter Cook role?

I’m proud to say that I have not.

Are you of the opinion that the two songs have quite a depth about them? The desire for love versus the desire for solitude?

‘Love me’ certainly is about the desire for love and adoration; however I think Bedazzled is about the attraction of apathy; with the cold callous aloof attitude of Drimble Wedge.

Was there a great big smile of pride on your fathers face, during or after recording?

I think there was a smile of amusement from most in the studio that day (in between laughter).

They are two surprisingly complex ‘Bo Dudley’ compositions and it was a joy to record.

They are certainly an absolute joy to listen to. Faithful to the originals yet with a great atmosphere and clarity to the recordings and an enormous sense of restrained fun.

The coolest piece of 7 inch vinyl you will buy this year, if you are lucky enough to get hold of one.

The final word must go to Pete and Dud – the Devil and the soul-seller, talking about God.

– He moves in a very mysterious way.
– Apart from the way He moves, what’s God really like? I mean, what colour is He?
– He’s all colours of the rainbow, many-hued.
– But He is English, isn’t He?
– Oh yes. Very upper class.

The Shadracks are: Huddie Shadrack on vocals and guitar, Rhys ‘Nebuchadnezzar’ Webb on bass and vocals and Elisa Abednego on the drum set. With special guests: James Taylor (James Taylor Quartet), J.W. Loveday (CTMF, The William Loveday Intention) and William Ivy Loveday himself.

Oh and don’t believe what you read…. Nick Cave didn’t record and release Bedazzled, Anita Lane did and he sang backing on her version.