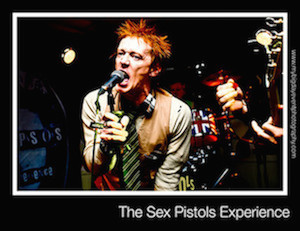 The Sex Pistols Experience bring a little bit of anarchy to The Yardbirds. idp hangs around in the relative safety of the bar.

First up are Dead Like Zombies a punk three-piece with a natty array of horror make up and a rattling good way with the classics. They’ve got loads of bluesy swagger about them and as they storm their way through a set that includes Blitzkrieg Bop, Sound Of The Suburbs and No More Heroes they get plenty of people in the rapidly filling venue up and dancing and thoroughly warmed up for the main event.

The Sex Pistols Experienceare the kind of tribute band who don’t just play the songs, they dress the part and act the part as well, while managing to steer clear of that phoney ‘pretending to be the real thing’ thing that I’ve seen some tribs do. The SPE offer an affectionate and impertinent take on the Pistols that is sometimes uncannily like the real thing but never gets bogged down in obsessive accuracy or hagiography (probably unlikely anyway, but it would be fun) or hero worship. See here for a reviewof their show in Bristol last year. If anything, they probably sound better than the originals did. It’s hard to fully appreciate them as a band when they’re playing stuff as heavy with cultural baggage as Anarchy and God Save The Queen but there are plenty of songs in the set that I’m not properly familiar with and on them I try to forget that I’m listening to a trib and try to just hear a band – and they sound great.

They’ve certainly got the moves and the mannerisms down to a tee. Kid Vicious is all in black leather, playing indolent bass and sneering so hard you worry about him damaging his lips, Johnny Rotter angular and spastic, bent almost double with head tilted, clutching the microphone stand like he’s afraid it might escape if he loosens his grip, Steve Clones pacing restlessly at the side of the stage, slightly above it all, and in the back Steve Crook hitting the drums as if they’ve done him a personal injury.

So far so good. They’re a trib band – you expect them to be at least a bit like the original. What marks the SPE out as being a cut above is that their attitude to the show is not to go out and just play through the songbook but to try to recreate at least some of the febrile atmosphere of the original’s shows. From the moment they set foot on stage they go out of their way to rile up the audience with a series of calculated insults, (including pretending to believe that they are in Cleethorpes, which is frankly unacceptable although it could be worse, because they could think they’re in Hull), and it’s not long before the heckles are coming in thick and fast. Rotter has mastered his character’s petulant vulnerability and he gives it back at least as good as he gets, with the advantage that if push comes to shove he can always just call everybody a bunch of cunts, which is not witty, but it’s pretty effective at closing down an argument.

Obviously most of his material is scripted so I shan’t spoil the show by repeating it all here, but there are some great put downs and after a while the atmosphere is so frankly bonkers that if it’s all rehearsed, then they must have a hell of a playbook. One of the band wrote on Facebook that this was the funniest show they’ve ever played and certainly there are loads of hysterical confrontations, some gratuitous flashing of underwear, plus occasional requests for Metallica and Scouting For Girls songs.

You’d think this would be the easiest gig to review ever, but here’s the thing. This is not the kind of gig where you stand down at the front blithely snapping away and jotting down notes, because within a couple of songs the mosh pit has started and frankly I wouldn’t go in there with a box brownie let alone my beloved Canons. So I dive in right at the start, grab a few shots that I hope will do and then clear off to the safety of the margins, to watch the pit seething and lurching back and forth in front of the stage. Even there I don’t take notes. This is not aa show where you want to take draw attention to yourself. This is a night for going under the radar as far as possible.

So there you go – they sounded great, they played lots of songs, all the famous ones plus some that are less famous (in our house anyway), lots of beer was consumed and many people with danced themselves to the point of exhaustion and beyond and it was bloody hysterical and even though I don’t do tribute bands I shall go again next time they’re back. I mean it man.