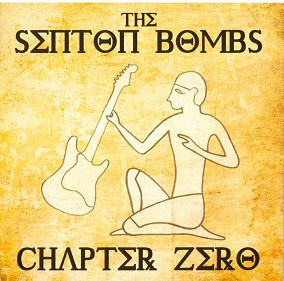 I’m not entirely sure about what The Senton Bombs are or want to be. Equally I’ve never really been a big fan of ‘metal’, but having recently heard (and thoroughly enjoyed) the new Damn Vandals album I was up for a listen. Describing themselves as ‘punk rock n roll’ gives a certain impression but to me they’re that aforementioned brand of music that I’ve never really been able to ‘get’.

Let’s not be negative though, there’s clearly an audience for this stuff as the Bombs fan base and seemingly endless touring will testify. For me, it’s a pastiche of what’s gone before. Alice Cooper, Motorhead, Iron Maiden, Guns N Roses, clearly show influences but I can’t help thinking that the ‘tributes’ are lacking a little. I’m not really sure where the ‘punk’ element makes any appearance on Chapter Zero, I’m thinking more spandex trousers and headbands.

But come on, what’s on show here? To be fair, they’re pretty slick. Guitars are well up front and solos are what you’d expect, but they are accomplished and clearly not something that is taken lightly. Similarly, the percussion is loud and raw and it no doubt serves as a great spectacle when they play live. Joey Class provides strong vocals which complement the music well.

The songs are well formed and arranged, but dare I say it, formulaic, and I think there lies the slight problem. Once you’ve played track 1 you’ve really heard all eleven, and whilst what they do is good there really isn’t much substance. Fans of the group will love this and that is really all that matters, but for the non-believers, it’s all been done before.