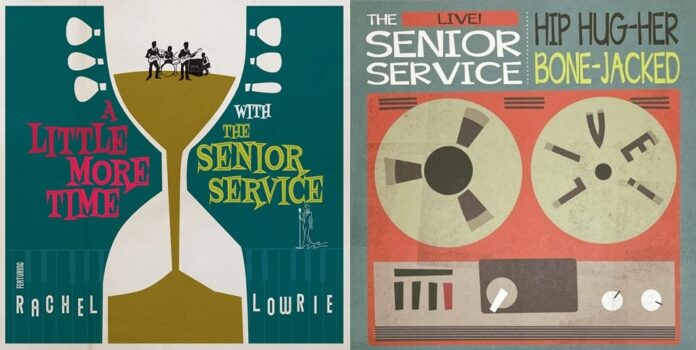 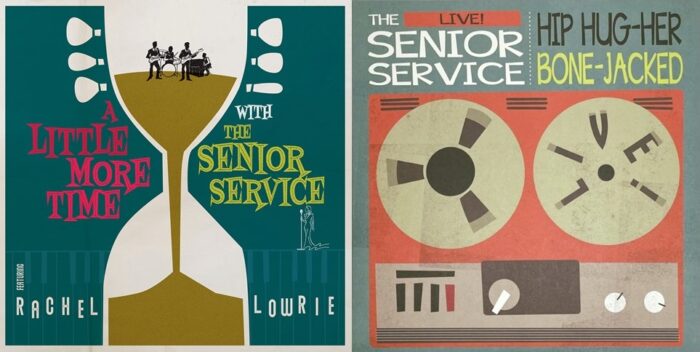 A duel-release from The Senior Service with a brand new EP and a live 7″, showing two sides of this band with a salivating Medway pedigree.

Oh, what joy, not one, but two new releases from The Senior Service landed in my inbox last week. The band may have formed only six years ago, but their Medway garage-beat pedigree goes waaaaay back, with the band members having played with The Prisoners, The Mighty Ceasars, Billy Childish & The Buff Medways, The Masonics, and The James Taylor Quartet. Whisper it quietly in darkened alleys, this truly is a super supergroup.

The first to come through was their new live 7″, which has been released on the wonderful Spinout Nuggets label. They’ve gone from strength to strength over the last few years with releases from The Mindreaders and William Loveday Intention and are really proving that they are ones to watch and hunt down all their releases. A collectors dream…or nightmare! And this 7″ from The Senior Service fits right into their garage groove, featuring two instrumentals, Hip Hug-Her and Bone-Jacked. A muffled count into the A-side, a cover of the Booker T & The MGs song, brings in a great organ-led shimmying easy-listening garage number. You can almost taste the lava lamp-dripped light show of a hidden 60’s dancefloor as the band swirl, rise and drop. The flipside kicks up more of a storm, rollicking along again on that same crazed organ sound, a perfect gig opener to whet the appetites of any garagehead.

If the Spinout Nugget’s single is a great dose of live action, the new Damaged Goods EP is a work of studio magic that sees the band hooking up with singer Rachel Lowrie to add vocals to their usual instrumental-based set-up. The result is magnificent as she adds smokey lounge-bar chanteuse stylings to the shimmering Spector-like winding grooves, replete with wonderful backing vocals that glide beneath. Opening song, Everyone’s A Stranger, is a real statement that the band are onto something new and special in their trajectory and it doesn’t let up. Seasons Of Intent, the second of the four original songs, doubles down on their path with the organ coming forth to add more protagonism to a song that recalls Nancy Sinatra at her absolute best. Just A Little Time adds some brass into the mix to lift the song higher still just at the right moments, the flourishes as the chords rise higher in pure soul adulation. If You’re Not There brings a dose of drama to the proceedings, sounding like a classic Bond theme. There’s a great fuzz guitar line that threads through it, tying together a wonderful symphonic garage-pop sound.

As a previously completely instrumental band, they still find space to flex their musical prowess on two cover versions. Their take on The John Schroeder Orchestra’s Lovin’ You Girl is a swirl of organ and brass that shimmers brightly while Mysterious Land, originally by Chris Lamb And The Universals, brings the EP to a close in style, wrapping surging trumpets around your ears as the band march on.

It’s curious that the band have gone with A Little More Time With…, the same title as the latest album from Reigning Sound, as, in part, they are mining the same 60’s RnB sound, one that has also seen great success on the last album by their labelmates, The Courettes. Both releases show the two sides to their coin and work together perfectly. Let’s hope that their collaboration with Rachel Lowrie is only the start of something new for them too.