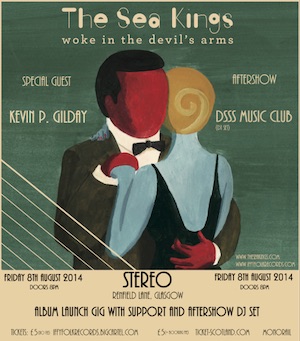 Album of the year contender (again!) from Glaswegian band with debut album that mixes 20th Century history with shades of antipodean rocking.

There exists, in A&R circles apparently, a compilation album of the worst demos ever received by record companies which is circulated for laughs among those in the industry. If  someone were to assemble something similar for press releases, the one which accompanies The Sea Kings debut album would surely be a contender for inclusion. I no longer have it (it was binned in a fit of pique after reading)  but believe me, phrases such as:

… had me wondering whether to laugh or throw up.

Although The Sea Kings need to have a word with whoever does their press, there are no such qualms about the music on this debut album. This is absolutely faultless. Glasgow as a city has produced a million bands; good, bad and fucking awful and there are invariably touchstones that anchor a group to the city. The Sea Kings have a smidgeon of Postcard Records about them but thankfully the twee, the touchy feely and the angst are left well alone. There is however, a healthy dose of The Go Betweens (who are often the forgotten heroes of Postcard) in some of the music as well as fellow Australians The Triffids, Crime And The City Solution and early Birthday Party as well as some hints of Josef K.

Lyrically the album is a hotch potch of clever phrasing, unlikely rhymes and arch storytelling; Brian Canning has a way with a witty couplet that certainly grabs attention. The title track opens and is an instant winner. Clanging, sonorous chords blaze quickly into Canning’s confident, rich vocal. It has that tense, arcing vibe that David McCombe patented with the aforementioned Triffids. There are some slicing, Crazy Horse style guitar licks that embellish the odd beauty of the song. Nick Cave would be proud of this one.

Bible John (oddly enough, the title of a single by other Glaswegian LTW faves  The Coffins) is the single and has a little of that anaemic funk guitar beloved of Malcolm Ross. It’s a song about the infamous Glasgow Barrowland killer of the sixties, told from the perspective of a victim. The jaunty melody and carnival ride of the keys and guitar are at odds with the sinister tale unfolding. “I don’t drink at Hogmanay, I pray” sings Canning in the coda and lends the song a sickening finale. Cracking video, too.

There’s not many a band would dare use the expression “I joined the Hitler Youth” in a song but The Sea Kings pull it off in The Night Of Broken Glass. Told from the perspective of a young man in late 30s Germany, it’s a bit reminiscent in tone to the movie  Europa. Canning tells the first person story of the youth being firstly indoctrinated and then fatally defecting. It reminds me a little of Red Army Blues by The Waterboys in it’s pained progress.  Sitting early on in the album, it’s a statement of intent that these fellas are no musical slouches or afraid to do exactly as they please.

Is Paris Burning? is another journey through the history of the late 20th century via a love song. It’s a little less ebullient than what precedes and is a sweet counterpoint to the album’s general “up” air. “I want to see the Sacre Coeur crumble to the floor” intones Canning and one can picture the protagonist gazing through his prison bars as he imagines the city razed.

Scarecrows is a cousin to fellow Glaswegians Le Reno Amps song If You Want A Lover in its skeletal rockabilly and Man In Black/Luther Perkins guitar twang. Subtitled Greetings From the United Front Of The Future Farmers Revolution we can safely assume its not actually about scarecrows ….

Across The Coals opens with a spaghetti western guitar intro and evolves into a sparse murder ballad with some sweet horn sounds way back in the mix. This is a band unafraid to try something a bit different.

Going back to that press release, they’re described as influenced by “Rock and roll, Gothic, new wave, chamber music, blues, gospel, country, Kurt Vonnegut and Alasdair Gray”. Apart from being a bit rubbish, this does them a great disservice indeed. This is a band that can stand alone without such comparisons. They shouldn’t need a press agent to convince one to like them, the music on Woke In the Devil’s Arms does that just fine.

The launch show for the album is 8th August at Stereo which is at 28 Renfield Lane.