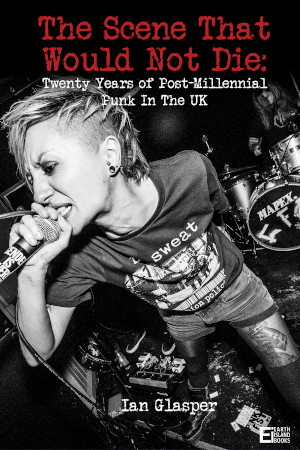 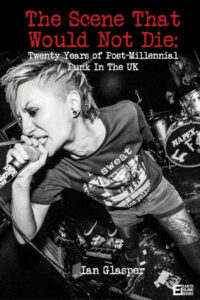 The Scene That Would Not Die: Twenty Years of Post-Millennial Punk In The UK by Ian Glasper (Earth Island)

Ian Glasper delivers up the fifth instalment in his series of books that chronicle the UK punk scene from 1980 to the present day. The final volume covers 2000 to 2020 and is a mighty tome.  Nathan Brown recommends it to anyone with even a passing interest in the DIY punk scene.

This is the fifth volume in what has been a slowly evolving history of punk in the faraway towns. Often sticking 2 fingers up to the music business and operating out of sight of music journalists, inhabiting places they feared to tread.

I can remember vividly Ian Glasper’s Burning Britain: The History of UK Punk 1980-1984 being published back in the early 2000s. I lapped it up, finding out more about many of the bands whose singles or albums had fuelled my love affair with punk. It appeared to be a one-off. 3 years later he followed it up with The Day The Country Died: A History of Anarcho Punk from 1980 to 1984. Now, this was an aspect of punk with which I had an even closer affinity. This second volume was more immersive than the first, including more obscure bands, reflecting what was as much a socio-political movement as a musical phenomenon.

Another 3 years passed and Ian extended his focus to the period 1985-1989 with Trapped In A Scene. In line with the increase in volume and speed of the bands covered, page count grew by 50% with even more bands crammed in. UK Punk had moved further underground, its own take on hardcore was cemented and the DIY punk scene as we know it today was arguably shaped. A fourth volume of what had now become a series appeared in 2012. Originally billed as the “fourth in the trilogy” and the “fourth and final” of the series, Armed With Anger: How UK Punk Survived The Nineties lived up to its name. As numbers dwindled and a small number of passionate punks kept the fire alight, the UK was still churning out some excellent bands and Ian Glasper included many of the key players. The scene survived to become the re-energised beast we now see, with the baton firmly grasped by newer generations. Luckily for us, it was not the final instalment, so we have The Scene That Would Not Die.

This is not a small book by any means. To start with it is physically huge – 634 pages on slightly thicker stock than its predecessors. I put in a pre-order and eagerly anticipated its arrival, watching others coo on social media as it hit their doorsteps. I leapt to the door when the postie knocked and knowing what he was handing to me I thanked him. He said “No, Thank you! I am really glad to get that out of my bag. have you felt how heavy that is?” I am certain there were similar exchanges across the land. So, aside from needing your reading glasses, the elders of the punk community may also consider getting in some lifting gear.

There are also 111 bands in this mighty tome.  I am not foolhardy enough to venture out on a pre-sawn limb to choose any one of them as a highlight only for the precarious bough I am resting on to be brought crashing down. Trust me, if you were part of the DIY punk movement in the last 20 years there will be bands in here you know as mates or enjoyed watching.  The text is accompanied by high quality photos of bands performing, just hanging out and the occasional gig flyer.

Ian Glasper’s trademark style is in evidence. His books on punk are a joy to read due to a combination of factors. Firstly they are well written – he writes professionally for a number of magazines that you might find on the shelves of WH Smith if you can find one open. Secondly, he takes an investigative personal approach that seeks to identify something unique or particular to each band and unearths both the diamonds and the dogshit. Thirdly, his rootsy style, which makes reading a chapter more like having a chat down the pub with the band. Fourthly, his obvious passion for punk. Ian is an active participant in the scene and this enables him to track down the hard to find and understand the dynamics of what goes on at the gigs, in the van, and the scene politics. I think the first time I heard his bass playing would have been in Decadence Within (in about 87?) and he still plays to this day. Watch out for a review of his new outfit Zero Again soon! As a result, we get warts and all. Any number of physical ailments, misfortunes and inevitable escapades with bodily fluids are recounted in gory detail. There are certainly a few belly laughs to be had as you work your way through the book.  There is also a life affirming sense of how committed these bands are or were and how their ability to overcome adversity is pretty much the story of punk since the music press told us it was all over.

Even reading the introduction is a joy in itself. There is an unbridled honesty to it. Ian provides the contextual overview of how the internet has changed everything – from recording and distribution of music to organising tours. As he was writing the intro the world had changed beyond all recognition with a global pandemic. He is up front in acknowledging that some bands are missing. This may be because they never responded to interview requests or purely because there are too many bands and not enough pages. To try and cover 20 years of the UK punk scene is somewhat a poisoned chalice as someone will always be left out. In his own words “This isn’t meant to be the definitive book on the last twenty years of UK punk – how could it be? – but it’s certainly the most comprehensive attempt to date, and should give an accurate overview of what’s been happening on the scene since the millennium”. To my mind, the intro probably tells you all you need to know about whether or not this book is for you.

Whereas in previous volumes, you were given a virtual tour around the provinces or regions, this time round bands are featured alphabetically. Ian realised that people tended to cherry pick, first reading the chapters about their local area, then picking gout the other bands they knew personally and then slowly picking up on the others. From Belfast to Kent via Wales, from the north of Scotland to Cornwall, there is going to be a band that was within puking distance of you in this book.

The first print run sold out within days of the release date, so if you want a copy best not to wait.