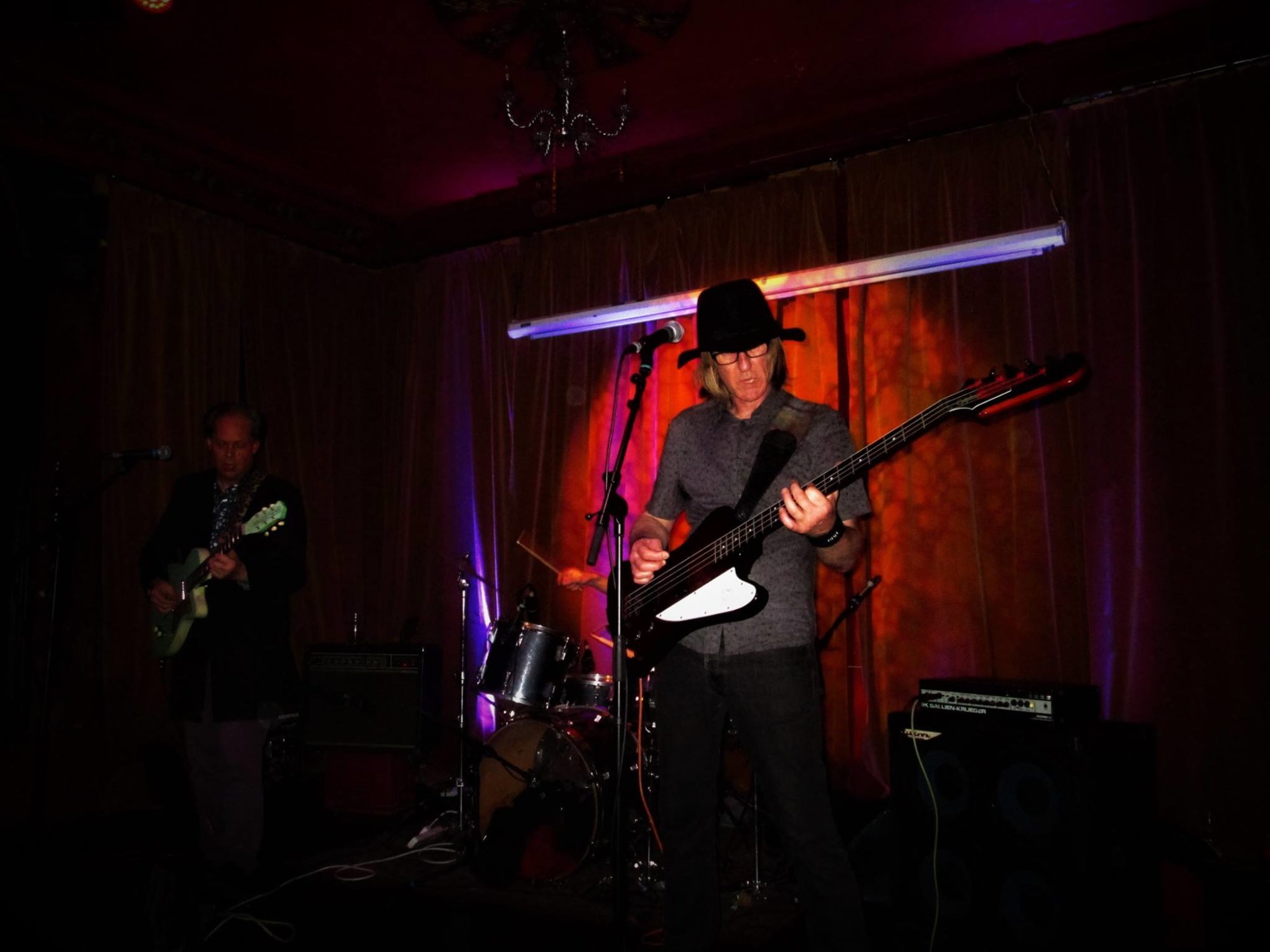 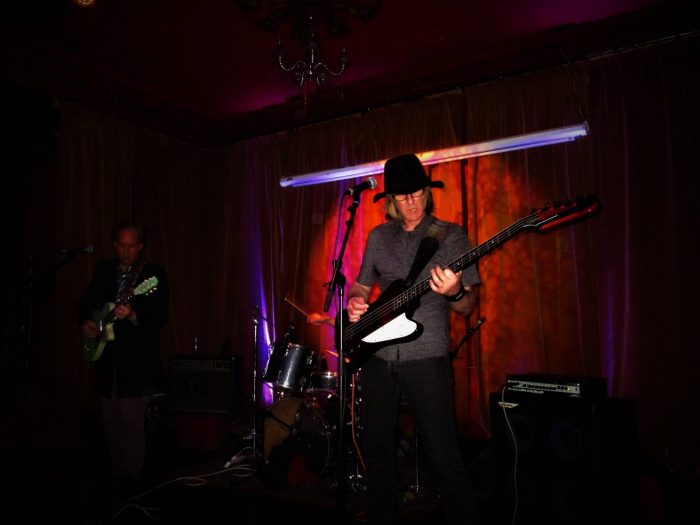 The band release their new album with a show at Gullvers in Manchester’s Northern Quarter – Emily Oldfield reports back for Louder Than War.

From dancing to dark synthwave to pulsing with punkishness – this was a gig giving the crowd a musical mash-up in the very best form. For this Saturday night in Manchester was not just the launch of The Sandells’ album ‘Forwards!’, but with support from Factory Acts and Shaking Chains, another launch was taking place – the launch of a new experiential level, with a varied crowd coming together to move to the mesh of genres.

First on stage at Gullivers were Factory Acts, a Salford-founded duo featuring spiralling synths, electronics and vocals from SoS (Susan) and the rousing rhythm of bass and beats from Matt Davies. This is music that can make you move – and without the melodrama – instead carefully crafted stretches of sound spellbinding the ear, like the soundtrack to your own adventure. There’s no bravado from the band – it’s all about packing in a powerful sound.

For anyone who thinks modern electronica means submerged lyrics and lazy ambience, let Factory Acts change your mind, for good – the vocals of SoS are some of the most striking out there on the Manchester gig scene, seeming eerily effortless. 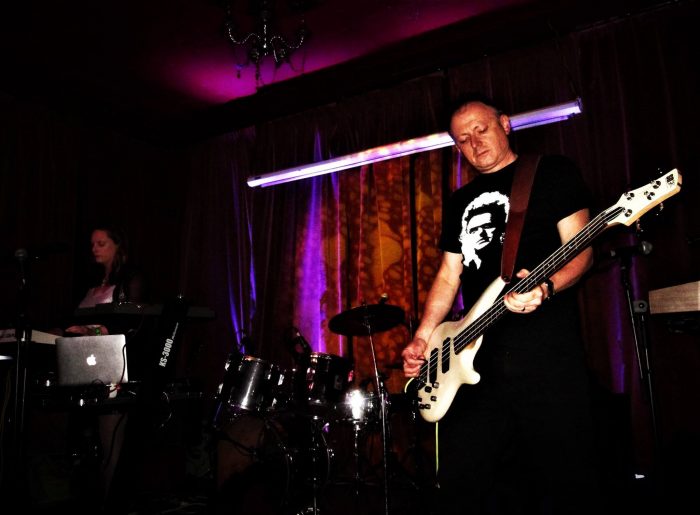 Their track ‘City Song’ stood out live, with the streaming lyrics of the opening beautifully contrasted with its crying, dreamy fade-out. ‘Americans With Guns’ was imbued with even more edginess to its irony and ‘Senseless’ billowed out in a hypnotic haze of witch house – taking the elements of the genre and turning it into a whole new experience.

A well-paced set which allowed the audience to delve in and decipher the layers of sound for themselves, Factory Acts’ choice to finish their set with ‘Leave The World To Us’, left the audience in a groove of slide-slapping bass and underlining that this is a duo of ongoing and ever-intensifying ability.

To follow were Shaking Chains (ex-Frazer King), taking their name from the 19th century political verse The Masque of Anarchy, written by Percy Shelley and inspired by The Peterloo Massacre which took place in Manchester in 1819. The band themselves are based in London, but their connection to Manchester is clear, as the crowd swelled in the upstairs room to move to their mix of psychedelic-style art rock.

Their music was delivered in deft bursts, with the single ‘Midnight Oil’ illustrative of their ability to move at a bold pace through a range of rhythms in one track, especially in terms of drums. It was cleverly co-ordinated to lead singer Jack Mahoney’s voluminous vocals, dwelling on deep notes before billowing out into a kind of yodel, reminding me a little of Jim Morrison and driven too by the band’s ability to harmonize. 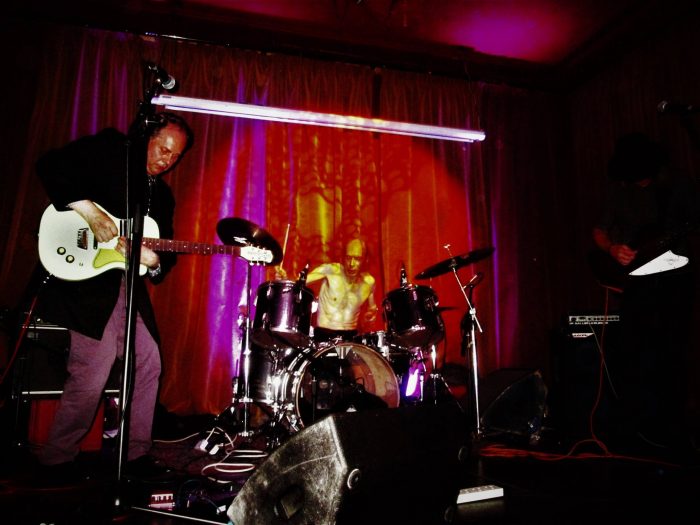 Interesting guitar hooks and high-paced pieces of spoken word worked other tracks with a groovy kind of grit, with a particularly good balance between bass and vocals. If you enjoy the performative aspects of a gig, then Shaking Chains are a recommendation, a clever cocksure combination of intelligence with indulgence.

Then came The Sandells, with another jump of genre, this time to their self-coined ‘Krautpunk’ which combines the late 60s/ early 70s style of Krautrock with the rawness of punk. After a five year hiatus, they are still packing a punch – an album launch with legs, shall we say. It proved that the contents of ‘Forwards!’, released on Salford-based Red Rec Records, could take political and personal turbulence and turn it into the chaotic creativity – from ‘Cowboys Don’t Have Brollies’ to the gutsy guitaring of ‘Reach’ (Ver 2).

The group of three – Tim Lyons on vocals and bass, Johann Kloos on guitar and Brian Benson on drums – put themselves at the centre of swelling wall of sound. A particularly profound sign was how many at the front of the crowd were drawn to dance, shaking with the kind of beautiful self-abandon only given by certain gigs. The Sandells managed it, with Brian Benson’s utterly intense drumming, dripping with exertion and driving the sound with utterly emotive force – as if hungry to hammer home the guts of each track. 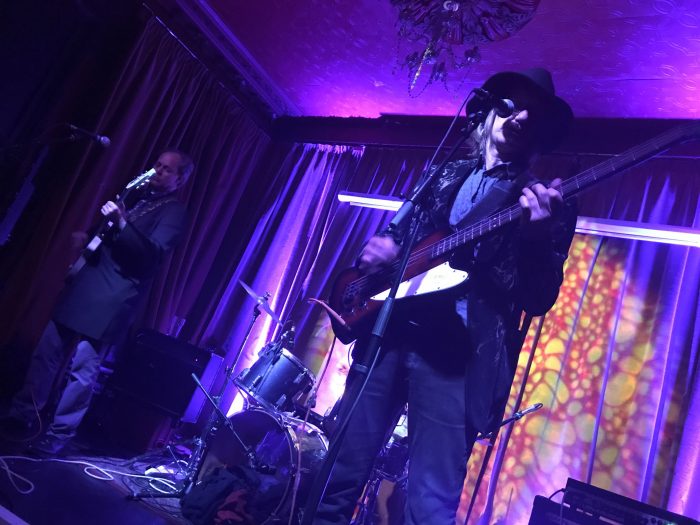 Raw and meaningful rather than melodramatic, The Sandells sound had me hooked. From the wonky entrance into a rapidly growing grittiness of ‘A Matter of Time’, to the dystopic, politically-resonant rendition of ‘No Way Out’ – this is band showing that bringing together the appeal of the past with the accelerated life of the present is possible. This is future sound at its finest – articulate, expressive and slashing through barriers between genres for the sheer sound experience. Loved it.

Find out more about Factory Acts, Shaking Chains and The Sandells on Facebook.