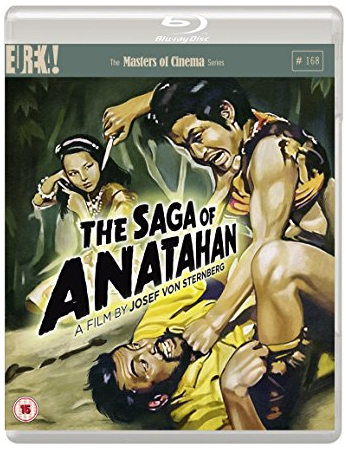 Jamie Havlin takes a look at an intriguing slice of cinema by a director described as the man who made Marlene Dietrich sparkle.

Narrated by Josef von Sternberg himself, The Saga of Anatahan proved to be the final movie directed by the Austrian born director albeit his adventure-romance Jet Pilot was released in its wake.

Set during the closing stages of World War II, the film tells the story of a dozen Japanese sailors stranded on the tiny Pacific island of Anatahan, after their vessel has been sunk by the American air force.

According to the opening credits, the castaways include five drones, two skippers, homesick ones and a patriot. They’re an inventive bunch, quickly learning how to make fire and, maybe just as importantly, succeeding in brewing some coconut wine.

The marooned men soon discover a village which they initially believe is deserted. To their surprise, though, they come across a Japanese man and a young women Keiko (Akemi Negishi) – the Queen Bee as the narrator will repeatedly refer to her as – living there. 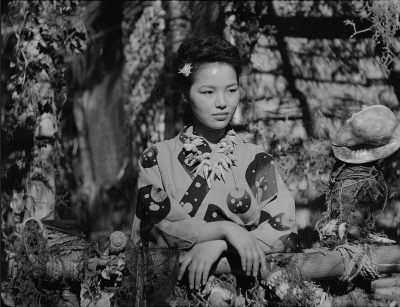 The presence of Keiko, the sole woman on the island, will change the dynamic of the men as they begin battling over the femme fatale’s affections, the petty jealousies growing into outright hostility in some cases. This behaviour becomes more dangerous when the men come across a crashed aeroplane in the island’s jungle and salvage a couple of guns from the wreckage.

‘Stupidity was epidemic among us,’ the narrator informs us as the men’s discipline and rationality evaporates, not helped by their drinking and, in a perceptive visual essay that comes as an extra, Tony Rayns compares the film to Lord of the Flies.

The days on the island become weeks, the weeks become months and the months become years and in a not entirely uncommon scenario of the time, the war finally grinds to a halt without the seamen becoming aware of events such as the bombings of Hiroshima and Nagasaki in the wider world.

Collectively, they remain convinced that Japan is unbeatable. When they’re finally informed that the war is over and instructed to surrender by a loudspeaker message issued from a passing ship, they dismiss the idea as enemy propaganda.

Based on a memoir by Michiro Maruyana, it’s a fascinating story and, despite making seven films with Marlene Dietrich, including classics such as The Blue Angel and Shanghai Express, Sternberg believed this to be his finest work, maybe because this was the one where he had most artistic freedom.

Made out with the Hollywood studio system, in addition to directing and narrating the story, Sternberg also helped supply the screenplay and photographed the film. He filmed in a studio in Kyoto especially constructed for the purpose and even thought to declare this as the opening credits roll.

Interestingly, he made an even bolder decision by leaving all the Japanese dialogue unsubtitled throughout the movie – I bet the studios would never have allowed this as it can so easily lead to a loss of immediacy.

He additionally employs an idiosyncratic narration technique, using the first person plural in the past tense, never identifying himself with any individual character. Some big questions arise. Why does he deny the vast majority of his audiences outside Japan the chance to understand the dialogue of his characters and why does the narrator speak in English with an accent that is clearly not Japanese?

These questions might at least partly explain why The Saga of Anatahan fared poorly at the box office in the States and in Britain. Sternberg recut the film several times during the following five years before finally abandoning the project. Thereafter he joined the staff at UCLA, teaching film aesthetics to students that included Jim Morrison and Ray Manzarek, the latter once stating that his ‘vision of sophistication and the darker side of the human condition was perhaps the single greatest influence on the music of The Doors.’

The Saga of Anatahan might not the ideal introduction to Sternberg but this fascinating tale of survival and descent into savagery is well worth seeing.

The Masters of Cinema Series presents the film on Blu-Ray for the first time in the UK in a special Dual Format edition.

Extras here are extensive and include the complete 1953 version of the film (Blu-ray only), a booklet featuring a new essay by Philip Kemp and much, much more.

For more on the film: https://www.eurekavideo.co.uk/moc/saga-anatahan

Watch the trailer for the film on YouTube: https://www.youtube.com/watch?v=xzk9N_9rY54