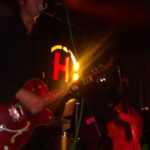 Toronto based psychedelic country band The Sadies recently played a blinding set at Brighton’s Hydrant. Luke Randall was lucky enough to witness it & below is his account.

Bespoke and booted in immaculate schmutter gripping their skinny-boy frames, the Sadies opened to a psychedelic squall of undulating feedback, reverb and distortion snaking its way through Brighton’s Hydrant.

Launching neatly into a brittle surf instrumental then seamlessly into wistful acid tinged country, Canada’s the Sadies proved their gilded status as a road-worn, road-tested and road-perfected unit.

Headed by the dual vocal and guitar talents of the lean, dark and handsome Good brothers, Dallas and Travis, these lads really do have the chops; put quite simply, their playing takes the utter piss.

Fraternal guitar interplay climaxes with some lightning accelerated picking that hints at familial telepathy on numbers like Northumberland West or Ridge Runner Reel. 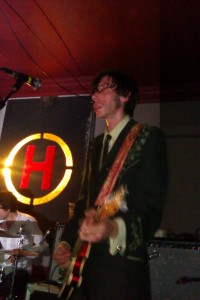 Proceedings escalated a further notch when Travis slammed his fiddle under his chin and truly let rip on the Louvin Brother’s Higher Power for a sweat soaked and finger frenzied hoe down. If Ira Louvin was gazing down from yonder cloud, I’m sure he would have approved.

Sold out, good spirited and way beyond sweaty the Hydrant crowd were gifted a special night. The final treat came in the closing encore of the two hour plus set with a Nuggets and Pebbles inspired Garage Punk medley: among the classics were storming fragments of The Count Five’s Psychotic Reaction and Little Boy’s Blue’s I Can Only Give You Everything.

Rarely off the road and frequently returning to the UK, next time be sure to make the effort, you don’t know what the fuck you’re missing.

All words Luke Randall. More pieces by Luke can be found here.