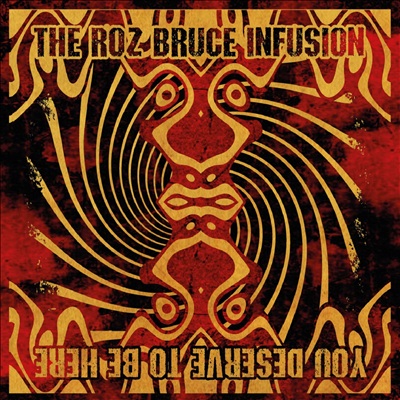 Coming from the hills of the Midlands The Roz Bruce Infusion, consists of Roz on lead guitar and vocals, Gaf on bass, and Dominic on drums. Together, the three of them will take your ears on a powerful journey of folk, shoe gaze and hypnotic sound.

The band’s latest album, ‘You Deserve to Be Here’ is a moody tale of traitors and the innocent, demons and angels and the battle of the powerful and the weak. These brilliant stories, entwined amongst beautiful music, create the perfect combination to form a memorising collection of music.

Starting with the powerful ‘I Sentence You To Life’, the album pulls the listener into the crazed world of the band and showcases the detail of their psychedelic guitar riffs, which creates a complex, yet laid back rhythmic style that carries on throughout the album.  However, saying this, ‘You Deserve To Be Here’ is a winding road containing both fast, angry tunes and great instrumentals pieces, presented in songs such as ‘Stamping’.

Roz’s powerful vocals are strong throughout, however are truly exposed on the quieter, more stripped back tracks of the album such as ‘Days Entwine’ and  ’13 Hours’. There’s something so moving about hearing her sing, as she puts every raw emotion into her songs to create an honest sound.

So do you want to be carried out to the hills to hear something dreamy but full of attitude? Violent yet extremely peaceful? Something covered in musical layers, yet stripped down to the bare bones of raw emotion?  Sound complicated? Good. All the best music is. Now go and turn on your music playing device, because it’s time to listen to the band that is The Roz Bruce Infusion.

You can visit The Roz Bruce Infusion at their personal website here or alternatively check out their Facebook.

All words by Sophie Sparham. More of Sophie’s work can be found at her LTW Author’s Archive.