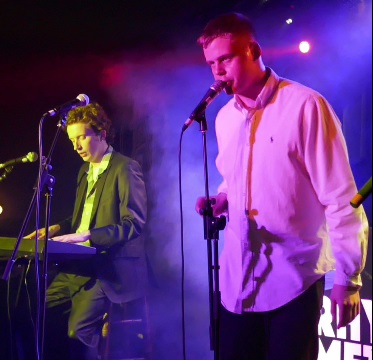 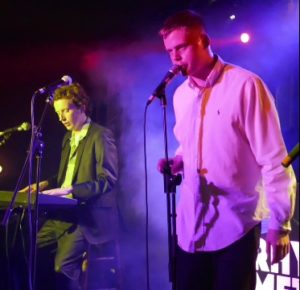 Keith Goldhanger seems strangely attracted to the music of The Rhythm Method and feels the world needs to give us a second opinion.

They met outside a pub down the road apparently and if it wasn’t for the big crowd here in this small venue this evening, singing along and showing huge appreciation in between tunes, you’d be forgiven if you’d just walked in that maybe, just maybe that association began about fifteen minutes before they walked onto this stage tonight.

This is what’s so fab about this duo.

Try describing to people what The Rhythm Method are all about and they’ll respond by saying it sounds terrible.

Drag them along kicking and screaming and once the evening is over they’ll thank you for the invite.

Early outings watching this act have resulted in one or two people punching the air and grinning from ear to ear standing beside others simply looking bewildered, wide eyed and not holding back in describing what they’ve seen as akin to watching their brother-in-laws behaving as though this is simply a rehearsal for Bruce Forsyth’s Generation Game.

This is also what’s so fab about this duo.

Tonight we witness, surprisingly for some, a big crowd who all want to be here and hear these tunes that currently number only about seven or eight. We leave wanting more but not getting more.

So where has everyone suddenly appeared from We ask ourselves. . .

Well it must be the airplay the duo’s new tune “Party Politics” has been getting recently on our favourite radio shows. . . .

You’d be forgiven initially to think The Rhythm Method sound like The Streets. In a way they do.
Chaz & Dave . . . . ? – Well only if you listen to the closing few moments of “Local Girl”. They sound like Madness, if Suggs went pop swallowed too many drugs and sung The Minder Theme tune in the style of Mike Skinner.

They’re a pop group playing pop music you haven’t heard for years and if they bought back Top Of The Pops everyone would be talking about them the next day.

Rowan Martin, the man responsible for starting that #indieamnesty tag on twitter recently sits at his keyboard during half the tunes, stands alongside his mate Joey for the other half and manages to keep the look of complete sincerity throughout the whole performance. Joey sings or talks his way through each tune, dances on the spot, introduces a young lady onto the stage for some backing vocals and provides us with sharp witty, brilliant lyrics that we chuckle along to before Rowan, along with the majority of tonight’s audience – sing the choruses.

These tunes are great catchy pop ditties that you can click your fingers to and sing along drunkenly to. They’re going to confuse people and divide people but once the people that don’t take life far too seriously are separated from those that will point accusingly whilst stating “You can’t do that!” we’ll be witnessing some bloody good nights out in the not too distant future.

Three tunes available at the moment and at least three or four others that some of us simply can’t wait to hear in our own front rooms. They may not have moved far physically since they met each other but this duo have got this far, and this far, in front of a big crowd at their own headline show feels like just the beginning.

The beginning of something special that the UK are going to love even though they’ll also get some people’s backs up in months to come.

This is also what’s so fab about The Rhythm Method.