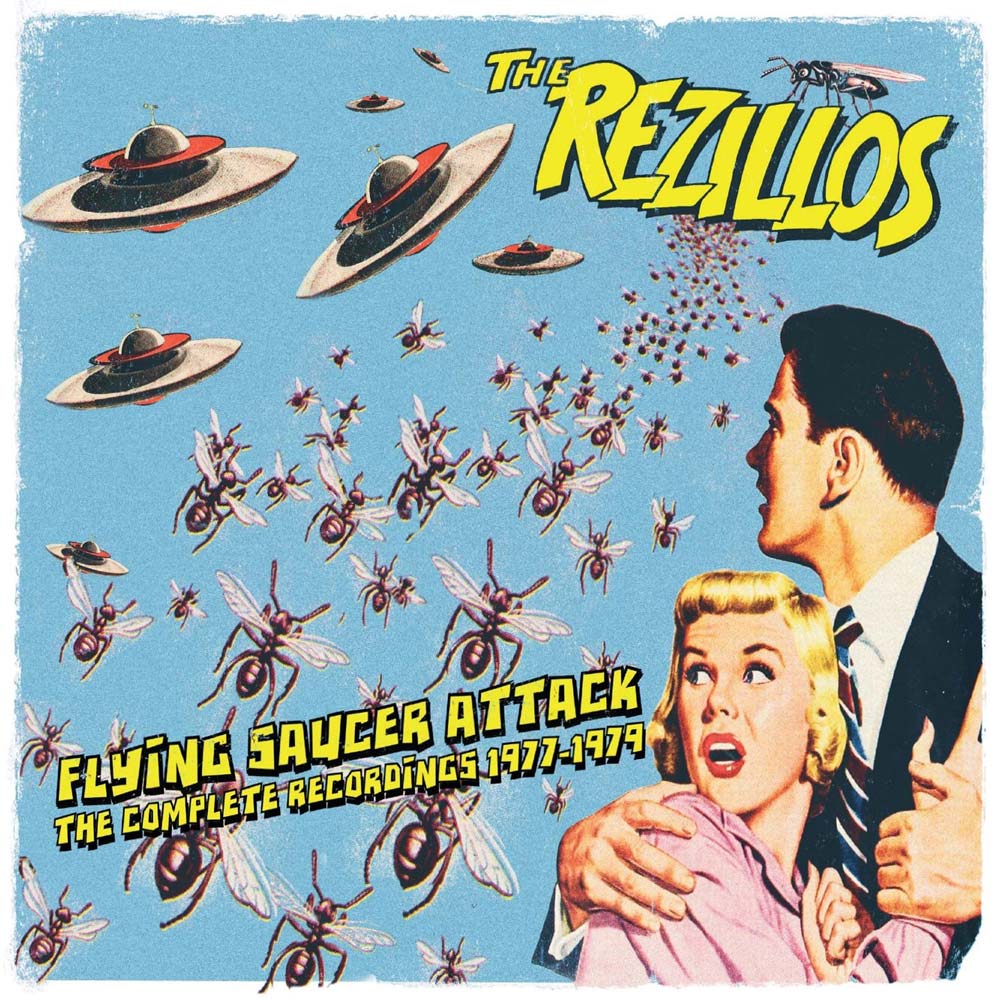 The Complete Recordings 1977-1979 of the Scottish Punk band, featuring their albums Can’t Stand The Rezillos and Mission Accomplished…But The Beat Goes On (Live In Glasgow)….LTW’s Ian Canty sets the controls for Destination Venus and arrives at the summer of 1978…..

By 1978 Punk was dead, so the papers said. Being on the young side I was a little late getting up to speed (plus I had the drawback of being stationed in Nowheresville, Southern England) and only caught the later waves as they washed up in the charts. Despite any debate on Punk’s demise, what a year for singles 1978 was though. Siouxsie’s fantastic debut, the Sham ones that divided opinion but delighted me, the X Ray Spex run of brilliance, Jilted John the perfect novelty, the Adverts’ No Time To Be 21, that first PIL single that was like the Pistols inside out….I could go on and on (and frequently do!). Top Of The Pops by the Rezillos stood out from the New Wave crowd as well and they were not out of place in such eminent company.

The programme of the same name seemed overrun by the Punks that year, with the smug DJs looking over nervously as the camera came away from the stage after filming another vital two and a half minutes. I have a clear memory of the Rezillos playing the song on there – a sardonically damning indictment of the whole show and the UK Pop “Business”, but such a big seller they dare not ignore it, a great single. Far from being stereotypical leather clad Punks, the Rezillos were a logical summation of virtually all the music that had gone before. They were definitely (and for the time, defiantly) fixated with 60s Beat and the original Rock N’ Roll, with Glam, Mod and even Sci-Fi fashions marking their visual presentation. Being pretty young, the visuals were garishly but very appealing, the energy palpable, the music and words anti-establishment, witty and wise. What more could a youngster need?

When you look at the short run of singles the Rezillos had they were peerless: not anything even approaching a dud. The first release on the fledgling Sensible label I Can’t Stand My Baby may even be the pick of the bunch, so brash, treble to the max, high speed total action! The noisiest and most exciting record I had heard at the time and still pretty damn wild today. The b-side cover of the Beatles’ I Wanna Be Your Man showed that instead of the “Year Zero” approach, they had a keen eye and appreciation for music of years past, rather than throwing the baby out with the bathwater. Both sides are happily included here. (My Baby Does) Good Sculptures which came next, very nearly broke them into the charts and was another fast and witty handling of an offbeat subject matter (and exceedingly catchy into the bargain). They didn’t have to wait long, as Top Of The Pops did the business on the business, so to speak.

They were totally equipped for success – Alan Forbes (known to the world since as Eugene Reynolds) and Jo Callis had played in a college covers outfit called the Knutsford Dominators, before in 1976 hooking up with Sheilagh Hynd nee Fay Fife (originally a backing vocalist along with Gail “Gail Warning” Jamieson, but would to move centre stage shortly), drummer Angel Patterson, William Mysterious on sax and later bass and the soon to depart pairing of Hi Fi Harris and DK Smythe. In Callis they had a songwriter of genuine class and vision, which would be the final piece in the jigsaw of what was already a happening live act.

It all came together with the first album (and only studio one until recently), the self-mockingly titled Can’t Stand The Rezillos, which blasted its way in the UK Top Twenty. I remember no less than Dinosaur Jr’s J Mascis said that it was the best album Sire ever put out and the hottest bass playing ever and who am I to disagree with him? Starting with that burbling, magnificent bass on Flying Saucer Attack, it fits perfectly with the original sleeve that looked like halfway between a 60s comic book and Jackson Pollock. The LP has the kind of cover versions the London Punk elite looked down their noses at, but in Rezillo-land where fun counted more than Year Zero posing they became celebrations instead, successfully re-fitting Dave Clark 5’s Glad All Over and Gerry And The Pacemakers’ I Like It for the Blank Generation. Beat given a good hard boot into the 1970s, with Someone’s Gonna Get Their Head Kicked In Tonite by Earl Vince And The Valiants (who were actually Fleetwood Mac, but this is a long way away from Rumours) administered a Punky makeover too.

From the first note of Flying Saucer Attack, to the classic generation gap song No, through the revved up versions of the singles right onto the thudding stomp of Getting Me Down to the ultra-fast R&B fuelled Bad Guy Reaction, this is a total delight. Now there are people who would have you believe that the original Punk wave never produced any good albums, that the action was all on the singles front. Absolute rubbish of course and Can’t Stand The Rezillos still proves the argument as bogus, even with the moving on of time and the benefit of hindsight.

On disc one we get all the single sides as bonuses, which are a little different – Top Of The Pops and Good Sculptures seems a fraction slower to me than the album takes and I Can’t Stand My Baby in its original form is perfection itself. If Destination Venus was a sad goodbye from the band it didn’t show, a great bit of catchy Sci-Fi Punk, that coupled with a manic Top Of The Pops performance should have pushed the single much higher in the charts. The parping sax on the William Tell Overture knock-off 20,000 Rezillos Under The Sea is joyful to hear and Mystery Action a good fast rocker.

After a great album and a quartet of stunning singles, the Rezillos shocked everyone by bowing out not long after the release of Can’t Stand…… Fife and Reynolds had fallen out with the rest of the band, with the warring parties quickly reanimating themselves as the Revillos and Shake respectively. Before they finally parted ways they played one final show, which of course was recorded and released…

Mission Accomplished….But The Beat Goes On (most of Disc 2 on this comp) was an “after the fact” release, presumably there was a bit of Sire trying recoup some money after the band’s unexpected parting of the ways. But it was perhaps more of a celebration than a wake. The Rezillos went out with a bang in the live environment where their mix of brightly coloured styles, verve and high energy effervescence were most effective. Of course the subsequently released record couldn’t capture the visual side, but it did portray their chaotic vigour and tuneful din. This is rough and ready for sure, but so were the times. It was inevitable there would be a fair amount of duplication carried over from the first LP (this second 12″ came out a mere few months later), however there are some new songs and different selections which keep it relatively fresh. Thunderbirds Are Go! of course fits them like the proverbial glove and Land Of A 1000 Dances seems apt when you imagine Fay et al shimmying madly to it.

Culture Shock (re-recorded by Jo Callis’ Shake on their first EP/Single) has a bit of 70s sitcom about it which does date it a tad, in contrast Teenbeat is a loving look back to more carefree times than the fraught late 70s. The Kinks’ I Need You, which pointed the way to Punk all those years back, is given new zest. The Rezillos hit the final strait with Sweet’s Ballroom Blitz, (My Baby Does) Good Sculptures and Destination Venus and then they were gone……

As bonuses to this disc we get three more live offerings from the Glasgow gig (Cold Wars, Flying Saucer Attack and a groovy Twist And Shout, all which made up for a posthumous single) and two alternative versions of Good Sculptures and Getting Me Down. The former is a knockabout fun version (“bum notes courtesy of William Mysterious”) and the latter verves almost in a Soul direction.

To put it bluntly, this is a great compilation of the Rezillos 77-78 studio and live stuff – you would have to be an awful pedant to whine and say they could have put the Peel/Kid Jensen sessions on there, for instance. That is for another time, but this rounds up all the alternative versions, has both sides of that brilliant debut single and also it is nice to have Mission Accomplished in full on a CD at last. Taking into account just the musical content (there’s some decent sleeve notes with comments from band members too), this is one of the best single band collections about. The Rezillos made invigorating, imaginative Pop Music that was smarter and more addictive and stylish than most…..they said “This is uncool”, but we know different, don’t we?