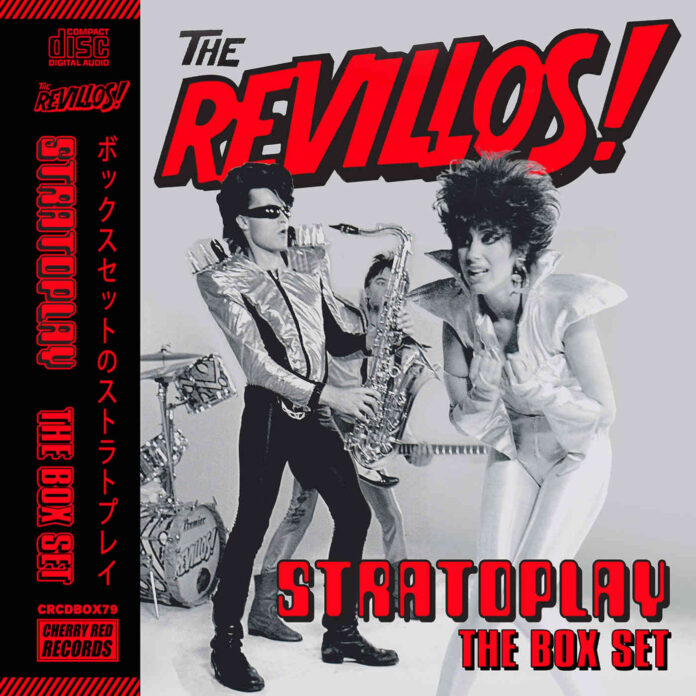 The Revillos – Stratoplay The Box Set 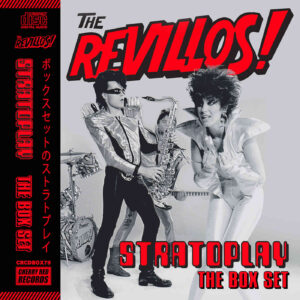 New collection which includes both of the Revillos’ albums Rev Up! and Attack!, plus radio sessions, single sides and live sets……Ian Canty hears what difference a letter change in a band’s name could make…

When the Rezillos split up in December 1978, the timing seemed most inopportune. The band had made breakthroughs to the UK top twenty with the Top Of The Pops single and Can’t Stand The Rezillos album and they looked all set for further success. Unfortunately record company pressure had further divided an existing schism between singers Fay Fife and Eugene Reynolds and the trio of songsmith Jo Callis, drummer Angel Patterson and bass player Simon Templar. After an ill-fated tour with the Undertones ground to a temporary halt due to some medical issues, the Rezillos band agreed to bring their career to an end. They did return to the tour (which the Undertones had persevered with on their own) for a final gig at the Glasgow Apollo which was subsequently released as the Mission Accomplished….But The Beat Goes On LP, but after that they were free of their Rezillos obligations.

Callis, Patterson and Templar formed Shake who lasted a couple of year before Callis joined the Human League in their second, hits-strewn incarnation. Meanwhile Fife and Reynolds shifted names to the very similar Revillos to dodge the legal issues around their Sire contact. This similarity meant that most fans picked up on this as simply a continuation of the Rezillos with different backing musicians. Not far off the mark, but not quite true. Eugene’s brother Nicky Forbes aka Rocky (nee Robo) Rhythm came in on drums, with initially the surname-less Cherie and Babs on backing vocals and Felix on bass plus a returning Hi Fi Harris guitar.

The band shifted slightly further into rock & roll kitsch than before and the 1960s influences were stronger. The Revillos were pitched somewhere between the B52s and the Cramps in their aesthetic, but more of a UK version mining Joe Meek, sci fi and Merseybeat, rather than Sam Phillips, schlock horror movies and rockabilly. They also had reworked their eye-catching visual image too, 60s-a-go-go garage punk meeting sci fi glam, if you wanted it all in one unwieldy soundbite.

This was a neat and attractive mix that shone brightly amongst the glum austerity of post punk. Virgin’s Dindisc off-shoot picked them up for their first single Where’s the Boy for Me? towards the end of 1979, though it didn’t make much of an impact in the charts, it did set down a marker for the band as a viable pop music fun machine. The next one Motorbike Beat very nearly made the UK top 40 and surely deserved better. An exciting and addictive piece of pure rock & roll joy, with a treble guitar attack that recalled that first, perfect Rezillos single I Can’t Stand My Baby, this was a winning combination. But for some reason Motorbike Beat didn’t make that leap into the “business end” of the charts, even after a great Top Of The Pops appearance.

The fair showing did however mean an album was on the cards, so Rev Up! arrived in the summer of 1980, jointly issued by Dindisc and the band’s own Snatzo Recordi imprint. Mostly bobbing along with an untameable but addictive verve, this record makes up the first part of disc one of this set. They were never more a “new wave beat group” than on the covers of Cool Jerk and Hippy Hippy Shake (spelt Sheik by the Revs) and some respite from the frantic pacing is offered by touching slowie On The Beach. The majority of the material still sounds great, with the glam stomp of the title track being superb and the powerful Juke Box Sound being similarly impressive. Overall this LP was an attractive package full of wigged-out energy.

Added to this disc are five single sides which include that first single Where’s The Boy For Me?, the cool camp of movie monster theme-styled The Fiend and the madcap Scuba Scuba (also issued as a single). As well there are two Peel sessions, from March 1980 and May 1981. The first seems to catch the excitement of the band well, with a great version of Voodoo being my highlight. The second series of four tracks from the Peel Show aren’t quite so impressive, with Caveman Raveman being a touch sluggish to my ears. Better was to come though with Snatzomobile, a zesty ode to the band’s trusty Citroen and Man Attack! which had a real punk pop spark.

Despite being an appealing collection the album did not chart. When the follow-up singles, a respectable if not blinding cover of the Johnny Kidd and the Pirates’ song Hungry For Love and Scuba Scuba, both stiffed as well the Revillos were cut loose in the run-up to Xmas 1980 by Dindisc. The imprint were rapidly downsizing their roster at the time to practically being OMD’s vanity label and the Revs amongst others suffered.

Undeterred by this downturn in their fortunes, the Revillos moved to the Superville label for their next set of waxings. Two fine singles in (She’s Fallen In Love With A) Monster Man and Bongo Brain followed, as well as the pseudonymous novelty record Santa Claus Is Coming To Town, cut as the Mysteroids. The band began work on their next LP Attack!. Along with a very good session for Richard Skinner in June 1981, these recordings make up much of discs 2 and 3 here. We get 1982 and 2002 versions of Attack!, the difference being the earlier edition consisted of uncompleted mixes which crept out to release in 82, seemingly much to the band’s chagrin.

Disc 2 gives us the 21st century Attack! though which has the correct, finished versions and it is no surprise that it is the superior of the two. The sound is fuller and also there are four more tracks, plus the Mysteroids’ single and that BBC session (which features possibly the best take of Man Hunt). Snatzomobile starts the LP on a high note and Sputnick Kiss is as catchy as hell. Bongo Brain, (She’s Fallen In Love With A) Monster Man and Mind Bending Cutie Doll had already made the grade as single tracks and the dirty and powerful Do The Mutilation is excellent too. Maybe if this version of the record had seen the light of day at the time, the Revillos’ story could have been very different, as this works as a fine natural progression from Rev Up!.

In comparions Attack! 82 is ok, but a little brittle sounding. Man Hunt and Man Attack! (The Revillos loved an exclamation mark) suffer the most, the thin production doing them a grave disservice. Others fare better, with Caveman Raveman outstripping the Peel session take at least. In addition to the LP we get 8 bonus tracks from the Tell Him, Bitten By The Love Bug and Midnight singles, Trigger Happy Jack’s swampy groove being my pick.

The underwhelming nature and the limited release of Attack! appeared to take crucial momentum away from the Revillos, but help from an unlikely source was to arrive soon. A cover of the Bert Berns song Tell Him came out on Aura as a stopgap at the end of 1982, but met the same fate as the LP. In a strange turn of events EMI snapped up the band early in the next year, perhaps seeing the potential for their bright pop in the mid-1980s that few others did. An album was worked on, but ultimately their stay at EMI was limited to the soul-styled Bitten By The Love Bug single.

The next two discs mainly consist of the two 1990s live albums Live And On Fire In Japan and Totally Alive, previously released by Vinyl Japan and Sympathy For The Record Industry respectively. The latter was also reissued in the UK on the Captain Oi label in 2001. The fact that the Revillos were a true live experience full of colour, attitude and hyper-fast attack, means it is important they are represented in this setting. Both of the sets here are very good. My personal preference is for Live And On Fire…, as the sound is slightly better and the pacing less manic. Totally Alive has more dips into the Rezillos’ songbook, with a storming version of Destination Venus the highlight, but for my money they’re played just a little too fast. Live And On Fire captures the band well in all their dayglo, frantic glory, the gritty Feelgoods’ riffing of Rev Up! and the slower and evocative Bobby Come Back To Me taking a moment’s pause in a giddy headlong rush of a set.

Live And On Fire In Japan also has in its favour four studio tracks and a Mark Radcliffe sessions from 1996 appended to it, where they recut Hip City and Motorbike Beat well and also include two new numbers, the fuzzy pop stunner The Last Of The Secret Agents and the more demure Crush, a better take I feel than the other studio version among the bonuses.

The final disc of this box has two live recordings from Colchester and New York, taped in the spring of 1981. For both we are deep in bootleg-level sonic quality. They’re feisty performances and interesting from a historical perspective, but the muffled sound means that they are unlikely to get repeated plays, particularly with the two far superior 90s recordings included on Stratoplay. If I had to pick between the two, the New York recording just has the edge, with rare covers of Rocking Goose and Dancing In The Streets, plus a fine run through of Scuba Boy Bop. Though having said that, the Colchester set also has a version of the Shirelles’ song Boys, a song which isn’t featured elsewhere in the collection.

I found it slightly unusual that this set did not included the Jungle Of Eyes album, the aborted EMI recordings which eventually saw the light of day in 2003, especially taking into account the disposable nature of disc 6. It is even mentioned in the sleeve note and while they’re far from the best Revillos’ studio cuts, I feel they do warrant a place on a career-spanning boxset. Other than that (and a few other odd tracks that have kicked around over the years), Stratoplay is difficult to fault, with a wealth of material to take in. The detailed accompanying booklet has contributions from Fay and Eugene as well a few diverting tales from Rocky too and the mini-sleeve reproductions are nice.

The Revillos brought life, vigour and a winning way with a tune to grim early 80s Britain. They were unlucky that the pop fans didn’t clutch them to their hearts in the way they deserved. Hopefully hindsight and this box will help spell out what gems they were capable of and help newcomers to enjoy the world the Revillos created around themselves. They were unique in the best possible sense.