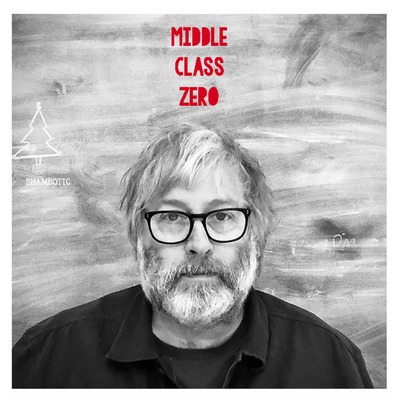 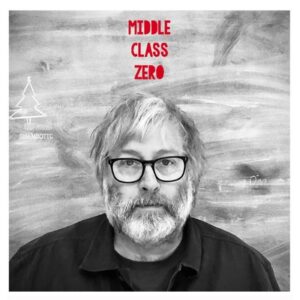 Lo-fi, garage/folk outsider who we reviewed in May 2019, back with a great new anthem: Middle Class Zero – and an EP of ‘protest songs that have (not) brought down leaders around the world’. Ged Babey kneels as Rev J Kinkaid starts his sermon.

The Rev Jonny Kinkaid is the ‘solo’ work of current guitar-player from the Charlie Tipper band who was also a founder member of Beatnik Filmstars and the Groove Farm.  He is an amiable curmudgeon who has a neat line in downbeat but savagely cynical songs which rail against corrupt and useless government.

We’re Fucked is a retrospective collection of such songs, the targets of which are mostly gone (Trump, Theresa May, Cummins…) but one of whom remains (at time of going to press).

Hey There America starts with the line Hey There America! Your president’s an idiot and is seven minutes of righteous character assassination with dirty guitar howling, insistent, bubbling drum machine.

The anthemic but lethargic Save Us From the Tory Scum I wrote about before here.

European Getaway targets Brexiteers who like(d) to sprawl hypocritically in the European sunshine and expect the locals to kow-tow to the tourist dollar.

Stand Down DC attacks Dominic Cummings with sarcasm and spite and Walkaway Mrs May says farewell to the incompetent non-entity who now seems positively Churchillian next to Boris.

Musically it’s that amalgam of Velvets and Dylan played acoustically and sung with a nasal almost-faux-American accent. It’s punk-rock-busking to quietly seethe along to as you roll your eyes at the state of the nation. It’s funny and knowing and mocks it’s own failure to spark the revolution.  Self-deprecating rather than self-serving rock’n’roll rebellion which will be appreciated by people of a similar disposition and age-group no doubt.

Best of all, though is the stand-alone single – the title of which mocks a certain Lennon song about ‘something to be’.

On the press release the Rev gets philosophical about his art.

Revealing what lies underneath / The Japanese understand this

Wabi-sabi means imperfect or incomplete beauty. This is a central concept in Japanese aesthetics, which comes from Buddhist teachings on the transient nature of life. A pot with uneven edges is more beautiful than a perfectly smooth one, because it reminds us that life is not perfect. A Japanese craftsman will intentionally add in a small flaw after completing his perfect work in honour of this concept.

Wabi-sabi, grey and flabby, rock’n’roll Yoda the Rev is a Middle Class Zero, and something to be.  He fortells doom and has a glass half empty – but he rocks and he rolls and he entertains with his home-spun sarcasm-and-bile-laced protest-songs.   The Woody Guthrie of the local Spar or Wilko or Lidl ( whichever is within staggering distance) – The Eeyore of Indie Rock…. Let Us Pray.  Thank the Lord for the Rev J Kinkaid.   For what we are about to receive…. is not enough.