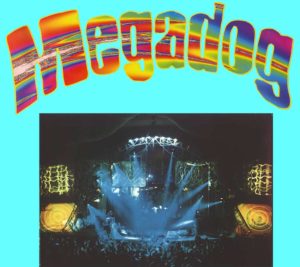 Megadog returns to Manchester Academy in celebration of the venues 25th anniversary.

I remember the first Megadog in some north london location – a new concept in clubbing that somehow blew up into an amazing event that has lasted decades.

As part of Manchester Academy’s celebration of their 25 year anniversary the legendary Megadog returns to Manchester. As the night that always demanded that you ‘Feed Your Head’, this pivotal club nightreturns to its spiritual home in the North to nurture the needs of electronic renegades and beat-hungry clubbers. Twenty-two years since it first reared its hedonistic head at Manchester Academy, we are delighted to announce that this legendary club night that combined live bands, DJ’s and circus performance with sumptuous lighting and production will have you dancing into the early hours once again on Saturday 21st November 2015.

This seminal party series was a formidable force during the 1990’s and was a night that was never afraid to move ahead of the times and push boundaries. A pioneer that offered a live stage to fledgling electronic artists, Megadog over the years have hosted magical, mind-blowing events.

With line-up’s that have included the godfathers of techno Orbital, IDM inventor Aphex Twin, Underworld, The Psychic Warriors Ov Gaia and sets from Transglobal Underground, Renegade Soundwave and virtually every live electronic and dance-crossover band that burned bright during the 90‘s, Megadog stood as a benchmark for unmissable, iconic nights in the clubbing calendar. Each event united strangers from far and wide providing the score to euphoric nights that sounded like endless summers, providing a sensory universe for Megadog’s loyal fans to lose themselves in golden nights, weekends and even weeks on end.

Having hosted 33 Megadog events at Manchester Academy, the venue provided one roof where house, techno, tech-house, trance, psytrance, jungle, dub, drum’n’bass and other myriad genres were refracted into one technicolour clubbing paradise. Now, in 2015 Megadog will return for an all-new bash of momentous scale especially for the Manchester Academy’s 25th Anniversary. A night that will unite generations of clubbers old and new, rekindling the memories of those hazy days and recreating them in an all new lucid dream. The Megadog event on Saturday 21st November will feature some very special live performances from the masters of spacey techno System 7, dub-dance masters Dreadzone and strung-out psychedelics Eat Static.

Be More Megadog…Feed Your Head again…