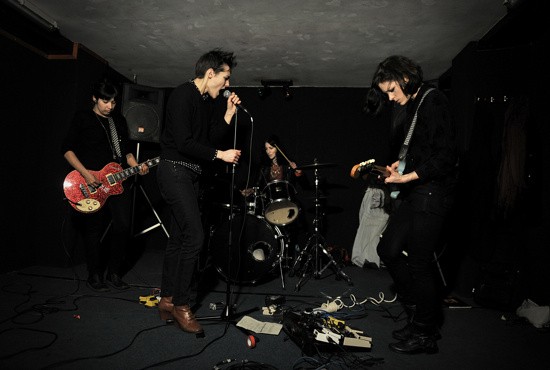 There is something really strange happening out there at the moment and it’s happening without anyone’s permission.

There is a Gothic tinge to the air, a modern darkness, a goth revival, a Neu-Goth.

There is a dark and thrilling shadow of an intense and inventive music that is flavoring many modern young bands who will just not obey the rules laid down by the musical establishment.

This clutch of young bands are daring to add a Gothic tinge to their music and openly talking about the original bands and celebrating the form. I saw New Model Army play a festival over the summer and the packed audience were all under twenty, dancing wildly to the band. I hear young bands talk about Southern Death Cult or Killing Joke and when I interviewed Mogwai recently they were telling me about Bauhaus being a key influence on the band – and they were not the only ones to mention them.

This kind of breaking the rules has to be celebrated and it’s almost certainly down to the Internet where hungry young music fans are starting to ask questions about the tried and tested musical lineage and making their own decisions over what music to like and discovering a clutch of brilliant bands who for far too long have been brushed away by the media because they didn’t fit in with their very narrow musical lineage.

The UK has always been rubbish at celebrating its inventiveness and Goth is not the only scene loved internationally to be derided at home but it’s the one that gets the most stick. The strange thing is that there was no such thing as a Goth scene, it was never called Goth, that was a Â media invention who then used their word to beat the bands up with.

In media terms Goth is one of the most maligned and written out of history musics has but it has become a fertile source of influence for a new wave of upcoming bands who, whilst not being strictly Goth, certainly have a flavour of its dark influence.

That’s one of the great things about music.

As soon as the experts dictate what musical history is it will re write Itslef. For a few years the post punk period was edited in the media down to a handful of great bands like the Gang Of Four and The Fall whilst bands who were never media pets like Bauhaus, X Mal Deutschland, Southern Death Cult and Killing Joke were pushed to the side and let’s not forget Joy Division- loved by the media but as Goth as any of the aforementioned bands.

It’s never been very clear why this happened as many of these band were as groundbreaking and influential as the more flavoured groups- often even more so. The twisted dub undertones to Bauhaus along with their imaginative guitar playing was quite revolutionary compared to the hipster post punk bands whilst Killing Joke invented a whole new soundscape. the Goth scene grew out of punk and whilst it was never intended to be an actual scene it was a place where musical went hand in hand with a freakier take on the sartorial styles of punk Itslef.

Maybe it’s because the bands dared to dress up and made it without anyone’s permission that has seen them pushed aside for years. It’s certainly true that the less bloke like a band looks the less likely they are considered to be musical genius!

Goth was a huge scene n the UK and whilst most people involved in the scene never consider themselves goth and more of an extension of punk it eventually morphed into a subculture of to own. The cliched Daily Mail idea of goth youth dressed as vampires is far away from the reality of what actually happened of course and its puzzling why most people accept this as the norm.

2012 has seen some great dark music with album of the year, The Seer by Swans creating a whole dark soundscape, add to that Factory Floor, Savages and many other upcoming bands and you have a whole new cross fertilization of sound and that’s not counting all the Emo bands and fringe metal bands who cross their whole thing with a goth darkness- in 2012 it’s bigger than ever. No one is claiming that here is a brand new scene here, we are just noting indie bands taking on a darker and more interesting take on things and the return of art Goth.

In terms of UK indie getting all Neu Goth it’s probably the legendary NME front cover with the Horrors on it. At the time it was derided but we loved it here and even sent the then NME editor a congratulatory email. Like punk decades before it was an unseen spark that took a few months to really catch fire as a whole host of young bands started to explore this decades old world that the Horrors had opened for them. This year the success of Savages has again underlined this new flavour, whilst many in the media claim that the band is pure indie and even name check bands like Jesus And Mary Chain in their sound hoping to bracket them in with safe influences Savages actually sound more like Bauhaus…

One of our readers Jaye Bloomfield has sent in a top ten of Neu Goth bands to back up these claims….

8. Dandy Warhols â€“ This Machine (This album is so GOTH it hurts) *

*David J formally of Bauhaus involved with these.