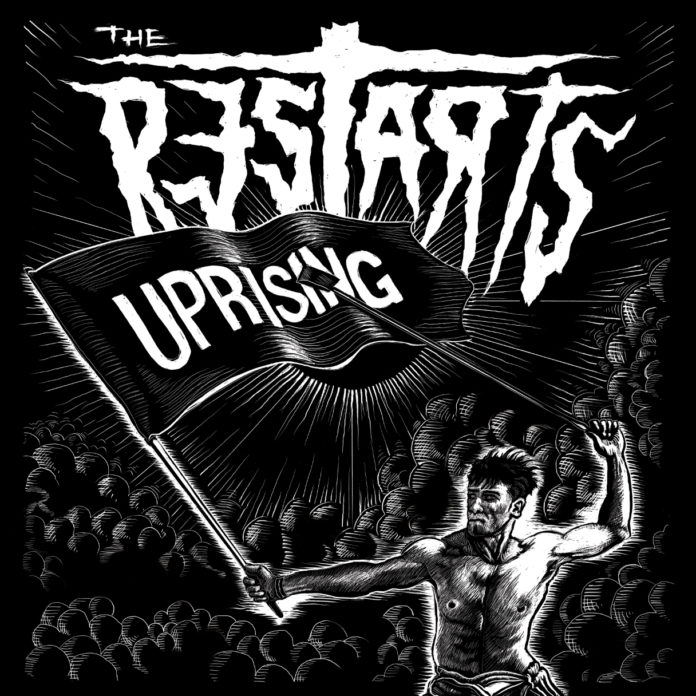 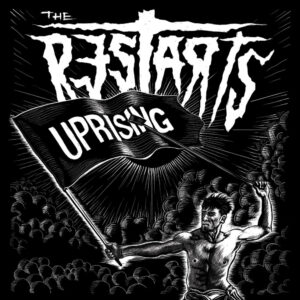 There is the adage ‘write about what you know’… I’m aware its generally aimed at authors but bear with me. The thought being it enables the writer to bring authenticity to the subject; well for the sixth album from the London based Restarts we are presented with a short manifesto, an explanation of the process and the knowledge that resulted in this much anticipated album.

“Dear World, after 14 months of writing, we are hugely excited to unleash our new 12 track album “Uprising” on Oakland’s Pirates Press Records.
Our 6th studio album, but our first introducing the maniacal Jeremy bashing the skins, takes a no holds barred approach to punk rock.
Drawing upon Robin’s recent humanitarian work in Palestine we tackle hard issues like the global denial of apartheid and the plight of refugees in the Calais Jungle.
Expect our usual brand of relentless thrash punk, ska anthems and back to basics old school punk.
Warning: contains pointed political critiques on gentrification, mental health, origins of homophobia, addiction and the political circus that is Brexit!
This is Restarts unapologetic and defiantly angry. X The Restarts”

From the opening seconds ‘Uprising’ literally explodes into life, a full throttle and very human reaction to the malaise we currently find ourselves drowning within… ‘Panic’ hits hard, the familiar twin guttural roar perfectly matched by a propulsive rhythm and a neat guitar solo, the same powerhouse rhythm forms the platform for ‘Living A Lie’ with its mob igniting chorus that addresses identity disguised keyboard parasites spitting bile across social media.

‘Shut Doors’ leans towards The Restarts ska dabbling’s, this isn’t any of your traditional ska, this is rage infused and with an insanely brilliant guitar riff that can’t fail to bring a smile to your face, similarly the guitar work of ‘First World Problems’; the lyrics are spat out with such vitriol its difficult to understand them first time round – thankfully a lyric sheet is included.

Musically The Restarts have lost none of their energy, they remain the vital uncompromising sound of DIY street punk, however I’d suggest the arrival of Jeremy on drums has seen the band mature, his faultless timing and additional vocals allowing their sound to expand to crushing proportions.

‘Out And Proud’ effortlessly demonstrates this progression whilst the lyric challenges Section 377 of the penal code, a British colonial-era law that criminalizes consensual homosexual conduct within former colonies.

‘Uprising’ hoists the flag for a free Palestine within the raining drums and even a sample of Palestinian protest song, whilst ‘A Dark Day In September’ utilises a recording guitarist Robin captured on his phone back in late 2015 when the French CRS Police fired CS canisters into a Kurdish family section within the Calais Jungle refugee camp, beneath the ensuing fury The Restarts have tunes a plenty, and as evidenced with ‘New World Order’ they are also ready to expand their sound; this one may well be Marmite to some, but I applaud the experimentation, the sound has a semi-industrial almost EBM vibe to it coupled with the familiar gravelled vocal sneers.

The Restarts have crafted their most accomplished release to date, the recording is perfect, every ounce of energy is retained, with production to match; it launches itself from the vinyl!

With the support Pirates Press can muster, I believe ‘Uprising’ will see The Restarts reach their biggest audience yet.