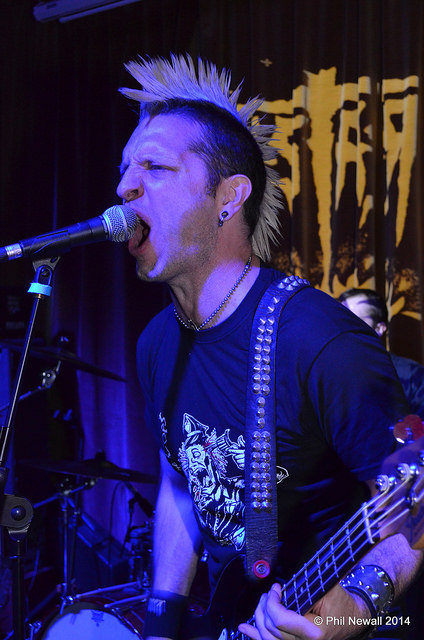 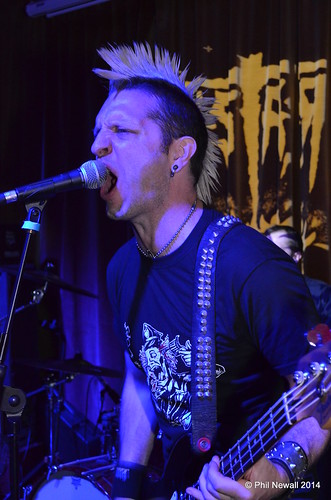 The Restarts describe themselves as purveyors of political angry punk rock; their Wikipedia entry describes them as a ‘street punk’ band.

Neither description does justice nor adequately describes the molten, ferocious rage that The Restarts subjected the crowd to this evening…the intensity of the performance being heightened by the heat, the walls to the venue appear to be warping, contorting to contain The Restarts battering ram of sound;

Bram hunched over his kit hammering out frenetic yet precise drum patterns – the foundation for some surprisingly complex bass lines courtesy of Keiran the Mohican sporting mouthpiece, whilst stage right Robin lets loose with a distinct buzz saw guitar.

The Restarts have created their own distinct soundscape, imitated by many though never equalled.

The twin guttural vocal attack, a raw visceral and at the same time rewarding assault on the senses…its perhaps the simplicity of guitar and drum, but across tracks like opener ‘No Escape’, ‘Drone Attack’ from the current ‘Sickness Of The Mind’ album and back to 2007’s ‘Outsider’ The Restarts rhythmic thrash instantly connects with the audience – an audience who have erupted into a heaving mass surging forward before ultimately collapsing over the low stage.

There is no barrier; The Restarts are about community, and fellowship – despite the safety benefits offered such a physical divide would merely serve to alienate band from audience and that is not the way of this band…a constant stream of fans step onto the stage joining the action, before launching themselves into the welcoming arms of the mosh-pit. 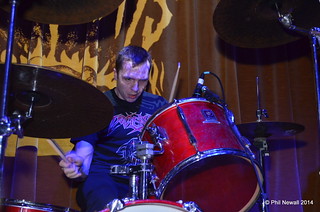 A blitzkrieg of potent noise matches the vitriolic lyrics; ‘Uganda Calling’ sees them sing about the demonization of same sex relationships in Uganda ,they sing about political freedom during ‘Independenzia’, climate destruction, borders, and flags, every track literally crackling with firebrand punk energy.

The fury that The Restarts channel into this performance will be remembered by those present for a long time, it’s a fury that should be experienced by more, though I suspect the bands own ethos would prefer them to remain an underground proposition.