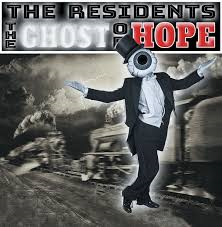 The Residents – The Ghost Of Hope

The Residents first new album since 2013’s Mush-Room, a storytelling project on train crashes around the late 19th/early 20th Century. LTW’s Ian Canty confronts a childhood scare, steals himself and then rides the rails.

My first encounter with the railway when I was very young filled me with fear – I remember standing on my local station as a goods train rushed through, noisy powerful, unstoppable. Awesome, as the youngsters say, but not in a good way. I edged so far back from the platform edge I had my back to the wall. It was safe to say I would never become a train-spotter. Over the years I’ve almost conquered the fright and travelled a lot on the railways, but occasionally when a train runs fast through a station it still comes back a little. So when I saw that the new Residents LP documented railways crashes of 100 or so years back, I cannot lie, a little bit of the residual scare came back to me a bit. The power of advertising.

The introduction of a railway network in the mid 19th century radically changed everything for people all around the world. Having access to a means of transport that could take heavy loads and passengers long distances quickly opened up a whole host of previously unavailable opportunities for travel and commerce.

All this progress came at a price. As soon as the trains started to run the rail companies (with no doubt outside pressure bearing down as well) tried all the time to make them run faster and carry bigger and bigger cargoes. As time passed the locomotive techonology jumped forward providing the speed and capacity required, but little attention was paid to updating the infrastructure, with the net result of regular derailments and some very nasty accidents indeed. People go on about ‘Health And Safety gone mad’ today, but back then a person’s well-being came pretty far down the list of priorities with regard to rail travel.

For a while now the Residents (who first came to my attention with the deliciously rum Radio Special from 1979), the anonymous Art Rock enclave from Louisiana via San Francisco, have concentrated on producing storytelling works (concept albums I suppose) and The Ghost Of Hope is the latest of a series that reaches back over the last 10 years. This one concentrates on incidents of train crashes in the early years of the US rail system (mostly), relating them in a way that aims to be true to the news reports and language of the time.

You can’t really review this CD as you would a normal LP, if you could have ever said that about a Residents waxing: it is not the case of ‘here’s a catchy number etc etc’, you are better off approaching it as one would an audio book of short stories. There is music of course, but it for the most part takes a back seat to reportage of the incidents at hand with appropriate sound effects. Some of the tracks on here have multiple parts and sections, breaking down each tale into chapters in effect. The use of a female voice on Horrors Of The Night to recount the story of a mother’s desperate search for her son after a crash in Pittsburgh in 1883 really brings home the terror of being confronted with a huge mass of burning metal and twisted bodies. Thankfully this one had a happy ending, but it is still chilling.

Train vs Elephant in contrast is near wordless, dealing with a proud bull elephant standing up to the huge metal invader of its territory: this is touching and sad and sums up the battle between technology and the beasts (including humans). The discordinate Proto-Post-Punk that the Residents pioneered in their destruction of the Stones’ Satisfaction is faintly echoed in Death Harvest and Shroud Of Flames is the nearest you get to a ‘song’. But as I noted previously the stories are what counts here and they are all presented in an enthralling and entertaining way.

Being the Residents they splash ‘Real?’ all over the front and back inner pages of the very nice and thorough booklet/CD case, making you question the veracity of these incidents. That set my mind wondering whether they were just mere fiction from inside of the eyeball heads. They had to plant that little seed of doubt! Pretending for a moment I was a journalist I had a brief look around the internet and there did seem some proof on there for a couple of the crashes, but others proved a little harder to disinter.

In the final analysis the accuracy or otherwise doesn’t seem to matter that much – the stories on The Ghost Of Hope do reflect the theme’s moment in history authentically and are told in a such a way that draws the listener in completely. Perhaps after all these years as perennial suppliers of outsider oddness, the Residents now sit with the likes of Johnny Cash and Woody Guthrie as chroniclers of stories from the hidden side of Americana? The strangest stroke they ever pulled!