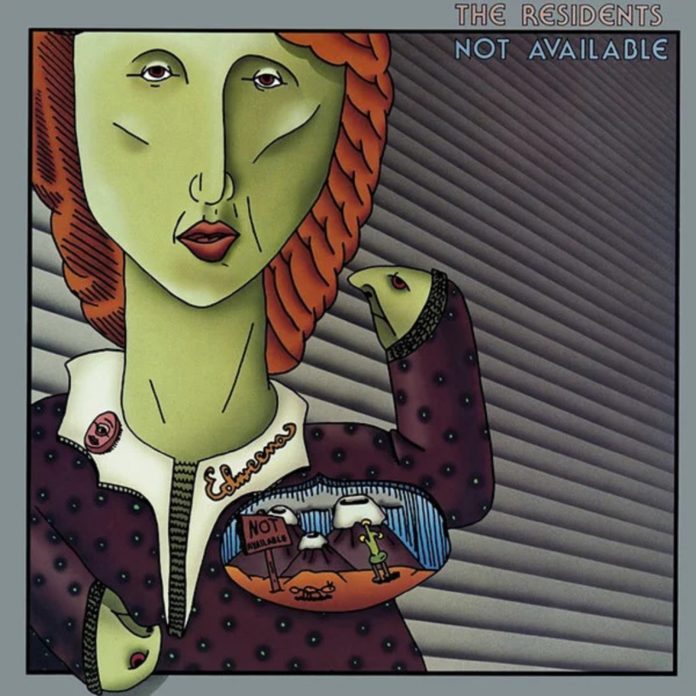 The Residents – Not Available 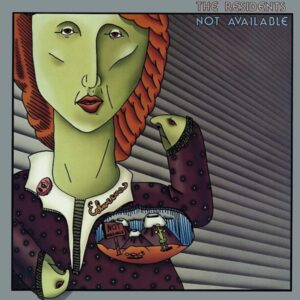 2CD edition of the album that languished in the can for four years due to the Residents’ “Theory Of Obscurity”, eventually being issued in 1978. The original album comes with the previously unreleased X Is For Xtra tape and some later live re-jigging of the material. Ian Canty was available for comment……..

When I was a newcomer to the Residents one of the most immediately attractive things about them was the mythology. They refused to be identified, rarely appeared live, kept all their workings internal with the Ralph label/Cryptic Corporation and toyed with concepts and sounds most artists would not entertain the thought of. Probably the most outrageous of all was the Not Available album. Recorded as a follow up to Meet The Residents in 1974, it was immediately shut in the band’s personal archive due to the “Theory Of Obscurity, attributed to the shadowy “Great N. Senada” figure.

This theory stated that the record should remain unreleased until the makers had forgotten all about it. If this was true, four years was the amount of time it took, because in 1978 Not Available finally hit the record store racks. At that time the band were still hard at work with the Eskimo LP and this project was taking some considerable time to complete. A gap in the Ralph release schedule needed filling, so the Cryptic Corporation (I know, most people think them, the Residents and Ralph Records are one and the same thing, but bear with me) raided the archives and released the album without the Residents’ blessing. The dip back into the archives filed the hole neatly, but much to the chagrin of the artists themselves. But as always with the Residents, you couldn’t be too sure.

This new edition puts forward a very different version of the story, one which hints at the discord behind the scenes at the Residents’ HQ post-Meet The Residents. Not Available was the first of the band’s concept pieces, but more rooted in reality than one might at first suppose. The ménage a trois that was the focus for the story line seems to have actually be drawn directly from the Residents’ circle. This situation, made into theatre, was meant to be part of the healing process, but instead resulted into some rancour which could have even finished the Residents before they had really started. The feelings were just too raw so Not Available was set aside, time being a great healing, for a point in the future when those emotional scars had sufficiently healed.

The first thing that immediately hit me on listening to Not Available is how far the Residents were ahead of the popular music of the day. It was 1974 and would take half a decade before most caught up, if they ever did. They leapt over every boundary contemporary music had ever set up without a second thought and in doing so made something remarkable. It’s not that easy to follow the story as the various different voices pop in and out, each with an opinion and style of their own, often deliberately obscured. But a musical theme recurs throughout, providing the canvas for the tale to be fleshed out with words and sounds.

Through the hubbub and busy musical pace I got a feeling of the tensions that had been brewing and also how the protagonists eventually resolved the situation. In the sleeve note it says no-one really hears Not Available in quite the same way, which makes reviewing problematic, but for my part I found it a moving experience that was also riddled with gallows humour. The fact that the viewpoints come at you from all directions and are often semi-obscured gave me the sensation of the confusion and ultimate futility of most human relationships – sadly, it all rang true.

You can’t help but wonder when the Ship’s A’ Going Down chant picks up whether the ship in question is the Residents themselves. It is certainly a reflection, consciously or not, of the pressure the love triangle put on the band members, even the ones not directly involved (if one accepts the sleeve note to be the truth). The phrase “Not Available” has connotation with regard to love – being in love with someone who is not available is surely one of the most painful and cruel kinds of human emotion. It’s worth bearing that in mind whilst listening to this record.

There’s also real wisdom here, like when the “singing Resident” sadly concludes that “aching and breaking are the making of the soul” on Part Two: The Making Of The Soul. Part Three: Ship’s A Going Down’s strings and pipes seem to herald the end of the “honeymoon period” and the beginning of the end. By the time we reach Part Four: Never Known Questions, all is consumed in trying to “spot the rot, stop the rot” and stating “my needs….ok”. A realisation what this relationship just wasn’t healthy for everyone involved. The Epilogue returns us to the initial theme wiser, but having lost something precious in the shuffle.

The first disc also includes a 1982 rehearsal version of Ship’s A’Going Down and a rare live outing for the same song four years later. They’re both different, of course, with the 1986 version a bit more driving and electronic (I suppose technology had moved on by then). The final track is Mourning Glories, a very elegant 2014 live play around with the themes of Not Available.

The bonus disc shapes up as a goldmine for any Residents fan, as it is the previously unreleased tape X Is For Xtra, which features the recordings that were re-edted to make up the Not Available album. These smaller fragments help to give a fuller view of the story. The vocals are just that bit clearer, aiding one’s understanding of the thrust of the story better and these bite-size, simpler pieces help to expose the craft behind the music. I wonder if “The Iceman” in New Mexico Dream was a reference to Eskimo? Little A (An Authentic Folk Song) is just lovely and there’s an evocative unnamed bonus tune as track 20, coming in with a pleasingly wheezy organ sound after 10 minutes of silence

This new edition gives one a wider view of what is the most personal collection in the whole Residents’ catalogue. The original Not Available album showed that the band were much more than just snarky conceptualists, showing a deep understanding for the human condition when you get past their customary flim-flam. The X Is For Xtra disc takes us even further into these sensitive areas, revealing the tensions that nearly tore the Residents apart. Not Available, in this new form, gives us the biggest insight ever into the Residents’ internal workings. At a time of great friction they managed to turn in some great art, even at great personal expense.