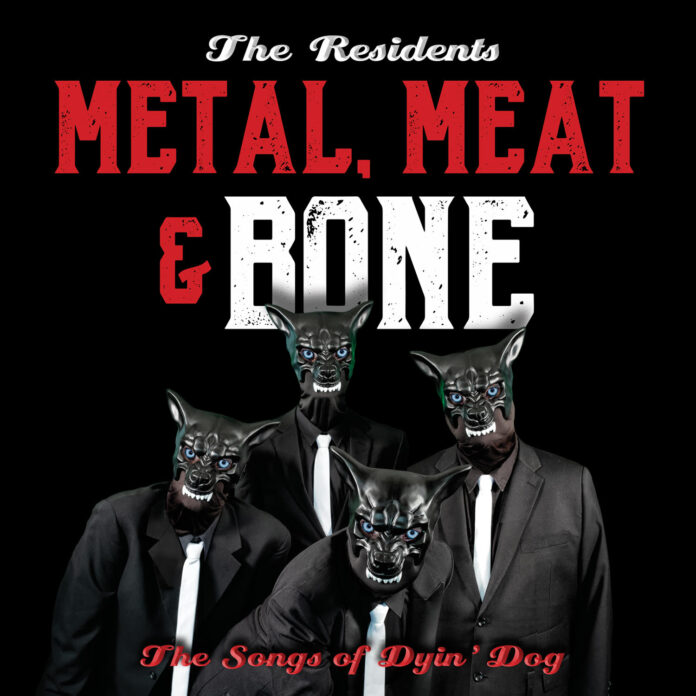 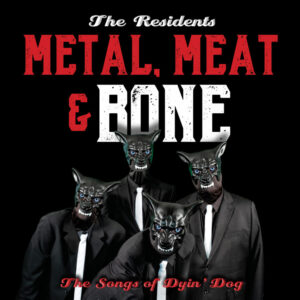 Brand new Residents album focussing on the songs of obscure (and very possibly apocryphal) blues singer Alvin “Dyin’ Dog” Snow, with a guest spot by Black Francis…..This two CD set breaks down to the Residents’ takes of Snow’s songs and a disc of the original Dyin’ Dog Demos…..LTW’s Ian Canty casts a quizzical eye over the Dog’s life……

The Residents have apparently wanted to dabble in the blues for a long time, but found it difficult to arrive at an appropriate modus operandi to do so. Finally the work of Alvin Snow, also known by the name Dyin’ Dog, came to light. Being found at the door step of an orphanage on the 13th January 1939 (which is given as his birthday), Alvin Snow was an albino born to mixed parents he never knew. In fact all that is known about his mother and father is a note pinned to the babe with only the words ” I Calls Him Alvin”. The lack of any family added to his identity problems, which he later incorporated into his own version of the blues (see Pass For White).

This bad start in life led the young man to a grifting lifestyle, though gradually the influence of the blues and particularly Howlin’ Wolf began to impinge on his hustling activities. A meeting with a Miss Lillian, who encouraged his emergent interest in music, had a big effect on Snow. In the mid-70s he started a band with Roland Sheehan, fresh from collaborating with the Residents in their early days. A crippled pet dog Snow had befriended called Chester met a grisly end, though it gave Alvin the Dyin’ Dog name and his backing outfit rejoiced under the title the Mongrels. A gig was planned for his thirty seventh birthday on the 13th January 1976, supporting Sheehan’s own band the Alliance. However Snow never showed and since then has completely vanished, with only the five vinyl discs he cut as demos with the Mongrels as proof of his existence.

After this disappearance into thin air Alvin Snow was almost completely forgotten, until the film maker Dan Hardy instituted discussions with the Residents about a proposed documentary film in 2013. This brought the band into the orbit of Roland Sheehan again, who becoming aware of the Residents’ ambitions to make a blues record, provided them with the five two sided demo discs Dyin’ Dog And The Mongrels had made back then. These demos were released last year in a boxset and the raw blues stomp contained inspired the Residents to cut their own unique versions of the songs, plus six further efforts inspired by the Dog. This, with those original 1970s Demos, is what Metal, Meat & Bone consists of.

Though inverting the order that the album is presented here, it makes sense to me to deal with the Dyin’ Dog demos disc first and then move onto the Residents’ reimagining of Snow’s songs in order to review. With the Residents you always have to take things with a side serving of salt, but one thing I will say is the Dyin’ Dog Demos for the most part are beautifully raw, shaking and rolling blues that thunder in with a primal force that could knock out a rhino.

Occasionally though the mask slips a little, like on the familiar busy sound added I Know and the ramshackle lope of set opener Bury My Bone, where the vocals do sound more than a little like “the singing Resident” at times. The growling Hungry Hound is a slow but guttural treat with an authentic and neat piece of harmonica and a driving guitar propels River Runs Dry along at a fierce velocity. A vocal style is employed here that isn’t unlike Tom Waits. Pass For White is excellent fast blues mayhem and if the bass dread of Tell Me recalls some band beginning with the letter R again, a crazed piano bashing digs it back to the roots of r&B. All that is left is down home shuffle of Mama Don’t Wait and the decidedly spooky Dead Weight, which is in turn both reflectively and edgy.

Alvin’s demos end appropriately with a huge roar. In their own idiosyncratic way with the Dyin’ Dog Demos the Residents have made a classy but primitive modern blues recording. Moving onto the second disc of Metal, Meat & Bone, we find the Residents interpreting the same songs in a more typically Residents way. They are performed in the same order, but are very much removed from the “originals” found on the other disc. One difference is that female vocals feature prominently from the consistently excellent Carla Fabrizio. Another long term Resident helper, Eric Drew Feldman shows up too, as well as lead Pixie Black Francis.

Bury My Bone has a big industrial dance electronic sound to it, opening up The Residents Play… with a totally different emphasis. The metal to the meat and bone of Dyin’ Dog? Huge percussive thuds herald DIE! DIE! DIE”, which is adorned by a searing Black Francis vocal and “sick dog” chants. A celestial choir helps wring out every drop of sadness out of I Know and gentle electro and ugly metal guitars clash on Pass For White. A bass heavy intro to The Dog’s Dream gives way to creepy treated voices, whereas Mama Don’t Go in this form becomes more haunting electronica than the blues. Finishing again in industrial mode on Dead Weight, The Residents Play Dyin’ Dog is a total contrast to the other disc – the songs buried deep may remain the same, but everything else is warped into a different direction entirely.

After giving their versions of the Dog’s material there are six bonus tracks cut under Snow’s influence. A steady rhythm and again some smart female singing set out the canvas for Cold As A Corpse, going industrial before ending with a music box sound. The synth lines added to Cut To The Quick juxtapose nicely with the song’s gritty pull and an unearthly rumble gives way to piano and electronics on Evil Hides. More typically Residents but excellent. Midnight Man brings things to an end with an almost stately 60s pop feel. As ever the Residents take the listener on a bewildering but alluring journey to their own world and busy themselves layering meaning and a barrage of sound to both fox and please the listener.

With Metal, Meat & Bone the Residents first and foremost demonstrate their unique way of storytelling and a real feel for the blues one might not have expected from the band. The Dyin’ Dog demos disc is, perhaps against the odds, a great modern blues outing. Though the Residents are no doubt pulling the wool over our eyes again, it is done with such quality and attention to detail that it doesn’t really matter that we’re being played a bit. Definitely fresh meat, straight off the bone.