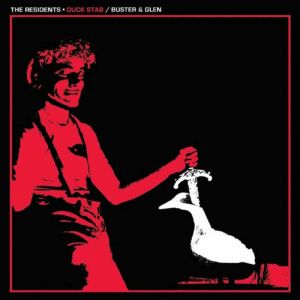 The Residents – Duck Stab/Buster And Glen

2CD reissue of the Residents 1978 album which came from combining the Duck Stab EP with its projected follow-up Buster And Glen. This edition comes with a full disc of live performances, rehearsals and re-mixes/re-imaginings…….LTW’s Ian Canty looks at when Residents-mania finally went over ground (in a manner of speaking)…..

As 1978 dawned, the Residents found themselves launched to a much higher profile in the UK at least. A favourable retrospective review of their Meet The Residents, Third Reich N Roll and Fingerprince albums by Jon Savage in Sounds sent folk on this side of the Atlantic searching for recordings by this intriguing and strange sounding outfit. Those three albums had been constructed of material written and recorded in early to mid 1970s, so with this much-needed burst of publicity boosting their notoriously low profile, it was important for the group to capitalise and set down some brand new tunes for a now inquisitive listening public. After the “problems” with the three-sided Fingerprince album and the drawn-out recording of the Eskimo album, the Residents came up with an all-new extended play entitled Duck Stab (the sleeve featuring a sinister photo mock up of said act).

Though still maintaining their original vision, Duck Stab was a far more accessible proposition to their previous material and though they were working on the Eskimo project too at the same time, this record can be seen as the seed of The Commercial Album of two years later. The EP was an instant success and buoyed by this, they aimed to follow it up quickly. The Residents went back to the studio to cut another seven tracks intended for a new Extended Play single in a similar vein, entitled Buster And Glen. Ralph Records decided to couple those recordings with Duck Stab to present a fully fledged album instead.

The LP was again met with appreciation from both public and press, as the more “Pop” element to the tunes entranced listeners and offered an easier egress into the Residents world than anything that had gone before. Phil Lithman, ex of Pub Rock’s nearly men Chilli Willi and the Red Hot Peppers (he was also now going by the nickname Snakefinger) was on hand to provide some magnificently bendy guitar work here as well, adding to the redoubtable skills of the Residents themselves.

So Duck Stab/Buster And Glen presented the band on their most “commercial” form to date, you still have to take into account this is the Residents and they aren’t going to let go of their macabre fixations and ominously theatrical musical moods totally. The dream-like structure and feel of Blue Rosebuds is a scary delight and Sinister Exaggerator is practically pure, spindly Electro, very pleasant and threatening at the same time.

Minimalism is the key to Bach Is Dead, employing a chanted refrain to good use as the Residents had a few times in the past. Despite the seemingly uncommercial nature of the band, they certainly knew how to utilise a good hook-line when they found one. The Laughing Song may give some the uneasy feeling they got when hearing Charles Penrose’s Laughing Policeman song on Junior Choice as a child or, perhaps preferably, bring a touch of Flipper’s Ha Ha Ha single to mind. The song itself is a rum tale of someone’s daughter who may or may not be a porcupine that has gout!

Moving onto Buster And Glen, Semolina is somewhat akin to what La Dusseldorf were doing at the time on their Viva album, hopeful and soaring synths, but with the regulation Residents jarring vocals putting their own stamp on things. Weightlifting Lulu even has a touch of Joe Meek circa Johnny Remember Me about its sound, working in a calm but moody Rock & Roll format, but giving it a jolt into downbeat 70s technology. Hello Skinny was another instant Residents classic, almost subliminal bass sounds burble and double saxophone pipe away, as treated backing voices and a clear lead vocal power the song along from out front. A similar guitar to the one that shredded ears on Satisfaction features on Electrocutioner, which quickly descends into chaos, before giving way to a Russell Mael-like voice and a more serene musical section.

Appended to the first disc are five instrumental pieces that were set down around the same time as the LP. There is a different version of Guylum Bardot (suffixed ’78), originally from the Meet The Residents album, which is given a rhythmic pulse that pushes it nearer to Electropop. When Johnny Comes Marching has a melody delicately picked out on strings, a marked contrast to accompanying drill noises and ringing tones. This disc is finished off by the smoother 1978 version of the Santa Dog single.

As we move onto disc 2 which compiles live recordings and later re-workings of the Duck Stab era material, we are firstly presented with some candid rehearsal recordings of the band four years later in 1982. In the sleeve notes it says the Residents were unaware that their efforts were being taped, but these uncluttered takes of Bach Is Dead, Birthday Boy and Constantinople actually serve the pieces really well. Simpler, sparser, but not losing any intensity. We go back to the Norway show of 1986 where due to not having all their equipment, the Residents played live without their usual array of backing tapes. The Duck Stab/Buster And Glen suite from that gig is a bit lo-fi with regards to the sound, but valuable and winning in terms of performance. The remaining live performances are solid fare, with the female vocals giving Lizard Lady/Hello Skinny another perspective.

The re-imagined tracks will split fans down the middle I suspect, but the Residents never had an qualms about meddling with their own back catalogue. Booker Tease in this form closes in on Art Of Noise territory which does hamper it, although the new version of Constantinople (Adobe) works far better, being an almost unrecognisable wind tunnel and drone effort. The two selections which were recorded for the Icky Flix DVD are pretty good too, with Hello Skinny retaining its warped charm despite the updated instrumentation.

Duck Stab/Buster And Glen marked the time when the Residents emerged into a lot of people’s consciousness, with the result that those of them that became fans obsessed about the band’s activities. This new re-release sounds good and on the whole not really at all dated by time – in fact some of these recordings wouldn’t sound out of place in the charts right now, which shows the ingenious and/or insidious way the Residents’ influence may have travelled. They were streets ahead, which may have cost them initially, but the Residents were in it for the long game.