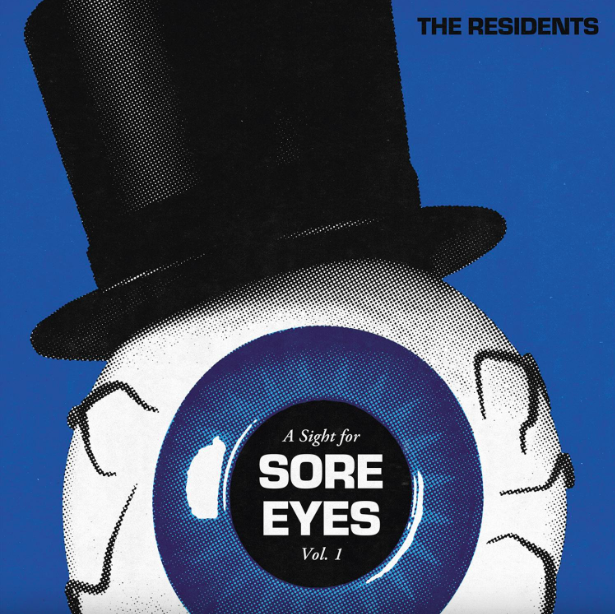 The Residents: A Sight for Sore Eyes, Vol. 1
by Aaron Tanner

A Sight For Sore Eyes Vol. 1 celebrates the story of The Residents – extreme art propagators and underground musicians who influenced the likes of XTC and Primus.

These surrealistic lines by Andy Patridge verbalise the quirkiness of art and the strangeness of the band who created it. Although the connection is loose across space and time, The Residents’ artistic approach could be summed up by the title of a Russian Avant-punk band’s album – Look Reality in the Eye and Deny It. Breaking away from the convention of the music business, they manifested creative disobedience through music and artwork.

For about ten years since their early experiments in the 60s, the band remained unknown to the world, having a cult following in California. In 1977, The Residents got exposure in the British press. They were pioneered by Jon Savage who reviewed their early records for Sounds. By that time, The Residents had produced two demo tapes, one EP (Santa Dog) and three albums (Meet The Residents, The Third Reich Rock ‘n’ Roll, Fingerprince), released on their independent label Ralph Records. An unprecedented level of obscurity. To explain the band’s raison d’etre, Savage cited liner notes from The Third Reich Rock ‘n’ Roll: “We (Ralph Records) as the parent company, support The Residents in their tribute to the thousands of little power-mad minds of the music industry who have helped to make us what we are, with an open eye on what we can make them tomorrow.”

Due to the nature of their works and views on popular culture, The Residents preferred to be anonymous. Although some of the names are disclosed now, the question in regards to the exact number and information about all members remains unanswered. People associated with The Residents were Hardy Fox, known as the collective’s co-founder and chief composer, Homer Flynn, John Kennedy, Jay Clem and Roland Sheehan.

Similarly to a ransom note, this visually striking book prompts a hesitating reader to solve the riddle of the band’s creative intentions. One of those was clearly to escape from the conventions of pop culture. The references of great renown served as the material for creative deconstruction. In the manner of Zappa’s Mothers of Invention, who famously parodied The Beatles’ Sgt. Pepper on the cover of We’re Only In It for the Money, the collective released the debut Meet the Residents, featuring the vandalised image of the Fab Four. 1977 single exploited the same reference – The Beatles Play The Residents & The Residents Play The Beatles is a patchwork of fragments from the Beatles’ songs and demos.

What it does show is the multitude of original artworks, posters, props and other ephemera such as collages, including newspaper cutouts with thought-provoking reviews and headlines. “So you thought Devo were odd? Time you met the Residents”, states one of the pieces from the unfinished collage for the second album The Third Reich of Rock ‘n’ Roll. In regards to Baby Sex, one of the relevant pages shows a letter from Hal Harvestadt, a merchandising director of Warner Bros. Records in Burbank, California. Although taken aback by the cover, Harvestadt was not inclined to sign the band, explaining that “the tape did not (repeat did not) set Burbank on its ear, even though […] was widely circulated through the stuccoed halls of good old WB”. In 1972, the collective founded an independent label Ralph Records – perhaps, the most sensible decision for the band of such a format at that time.

With his experience of assembling visual ideas for other music books e.g. on social punk, Pixies, Ministry, graphic designer Aaron Tanner accomplished a visually difficult task to present the twenty-year story of the band. Their lifespan was longer therefore the book is published in two volumes. Vol. 1 covers the formative years in the 60s, the Ralph records period till the departure of John Kennedy and the reformation of the label in 1983. Conveniently, the volume is split into chapters associated with particular records. Each includes “love letters” from artists whose creative achievements were defined by the “all-seeing” presence of The Residents. With the introduction by Les Claypool of Primus, the book contains other testimonies to deep appreciation, contributed by Aaron Freeman (Ween), Danny Elfman (Oingo Boingo), Ego Plum, Paul Reubens who created The Pee-wee Herman Show and many more.

Written by fans, the book is addressed to a reader with appropriate background and knowledge of The Residents. Each fragment, whether it is a photo, letter or newspaper article, provocatively prompts one to delve into research on the subject. Apart from an essay by Clayton and bits by other artists, the book does not contain a thorough analysis or information on the history of the band. There are many facts worth digging into such as the details of the Santa Dog distribution. As the story goes, the band produced 400 copies, of which 300 were sent to friends, record companies and relevant figures. Richard Nixon and Frank Zappa were on the mailing list, both returned their copies unopened (Zappa no longer lived at that address). These facts, however, can be found elsewhere but The Residents: A Sight For Sore Eyes Vol. 1. If you are not familiar with the nitty-gritty but curious and determined to do a bit of research, this book should be up your street.

More information about The Residents is on their official website.

The Residents: A Sight For Sore Eyes Vol. 1 is available on Melodic Virtue.