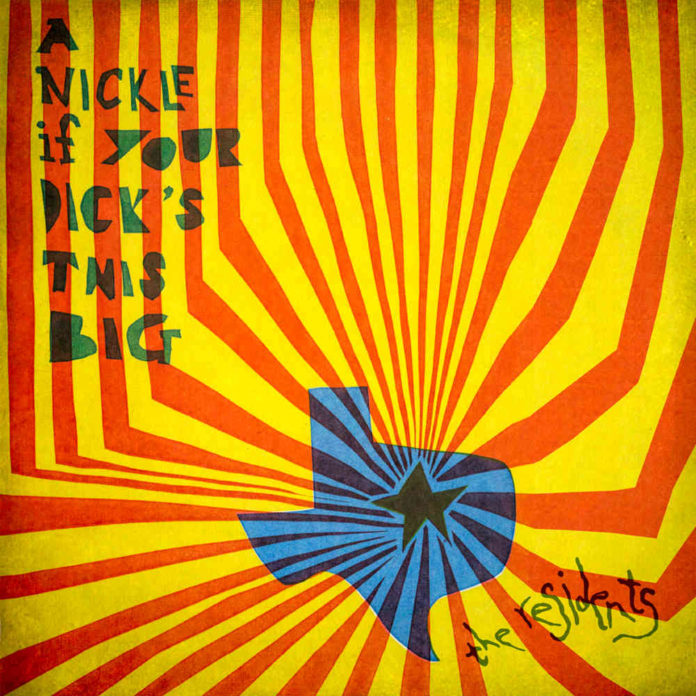 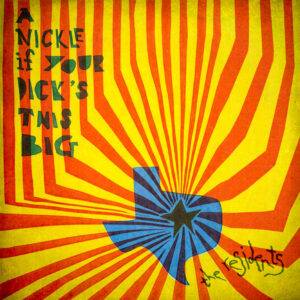 The Residents’ pREServed series goes pre-Residents, with recordings that made up the fabled Warner Brothers tape that eventually gave them the band their name and also the unreleased Baby Sex album from the same timeframe. Both of these albums were only previously available as a limited edition RSD vinyl issues…Ian Canty delves deep into the formative years of the forever anonymous band…….

The pRESserved series has so far given fans of the Residents an unprecedented opportunity of a fascinating look behind the curtain of a closed world (but only as far as they want). The new 2CD set A Nickle If Your Dick’s This Big (I’m not sure what that means – a nickle is a US coin, I know that, but as to the rest…) goes right back to the band’s genesis, before in fact they were even called the Residents. A rather unheralded one but key figure in their formative forays into music was Roland Sheehan. He was a Louisiana musician who was a friend of the collective that would go onto spawn the Residents, from way back in their days before their flight to San Francisco. He brought with him a collection of musical instruments that the pre-Residents, along with Phil “Snakefinger” Lithman and the mysterious N. Senada, started to experiment with.

Forgoing any formal tutoring or practice beforehand (but from listening to A Nickel… it slowly becomes apparent that at least some of the “Residents to be” probably weren’t starting from scratch), the formative band began to work on their own musical pieces. Another plus that came with Sheehan was a state of the art tape recorder, which was apparently given to him as a gift from a Vietnam vet he became pals with. The band started to tinker with the equipment, editing the various pieces they had recorded and the upshot of what they came up with is what is presented here.

The first disc of A Nickle takes in what is known as The Warner Brothers Album. On the completion of their efforts, the band sent a tape of it to Warners for their consideration, working on the premises that if they were hep enough to sign Captain Beefheart they may be able to appreciate the contents. A&R man Hal Halverstadt returned the demo plus a quirky rejection letter addressed to “Residents” and subsequently gave the band their name.

It almost goes without saying this is recording quite raw, but someone certainly knew the rudiments on the piano at the very least. What is revealing though is, even in their pre-Residents stage, how much of the attitude and approach the band already had in place. It was these things which drew many to them and which would see them through their near half a century of outsider activity.

The album is split into four clumps which consist of anything from 8 to 10 song fragments stitched together. It is oddly fitting that a jarring version of the Beatles’ Strawberry Fields Forever” opens the very first part, given the band’s fascination with the Fabs through their early years. The toytown sound that heralds the start of The Warner Brothers Album shouldn’t fool anyone – just a couple of minutes into this first piece they pull out Baby Skeletons And Dogs, which seems to me to presage the Fall. It also shows the Residents’ later lampooning of consumerist society was already on display with the line “find yourself an American dream, buy yourself a new washing machine”. Liberal use of the kazoo enlivens Oh Mummy, Oh Daddy, Can’t You See That It’s True and Baby Skeletons is neatly reprised.

Part two is longer and if the piano playing does venture a little down “Les Dawson Alley” at points, the methods and panache of the fledgling outfit are revealed further. The fast guitar stabs on Jimi Hendrix Dildo are pleasingly shrill and Sweet Meat is a fully realised and warped country ballad in miniature form. Moving on what would have been presumably the second side of the album, piece three includes a couple of genuine covers in Cole Porter’s In The Still Of The Night and Dylan’s Maggie’s Farm. As you would expect they’re given a thorough going over in a style that they would pursue later on The Third Reich N Roll LP.

The final lump of The Warner Brothers Album starts with someone shouting “not again” and voices on In The Still Of The Night Again that strangely resemble Beavis out of Beavis And Butthead (but obviously way before that idea was even hatched). Sold America again looks at the commercialisation of contemporary life and another version of Oh Mummy seems to have a little of 96 Tears organ buried deep down. Howls, feedback and fast guitar bring down the curtain on the album – a satisfying outré diversion but evidently not the chart potential that WB were after. The realisation the rejection letter brought led in turn to the band launching their own label Ralph in the future.

The two bonus offerings on the first disc of A Nickle come from the pre-Residents first two live shows. The first show is presented in far better clarity and is longer, which is good given the historical nature of the show. Starting with what was to become the Residents’ trademark quirky stage announcement, they go straight after into the unsettling and discordinate Somethin’ Devilish. A lot of this is spoken word or acapella, but the arrival on stage of Miss Peggy Honeydew gives form and they finish with a fine version of D is For Doorknob, which meets with wild crowd approval.

The band’s second show was a seemingly off the cuff affair at Snakefinger’s wedding. The material is similar to the above, with the poem James Dean’s Death and chants of Fourth Crucifixion In Five Years and their tribute to N Senada coming between a couple of bass duets. This selection isn’t as clear in sound as the first gig, but seems to go down pretty well and brings A Nickle’s first disc to a good ending.

Second disc of A Nickle is entitled B.S. is the 1972 Baby Sex album, which could be termed the last pre-Residents recording, if you count the Santa Dog single as part of their canon. The band’s writing and playing had certainly come on – with set opener We Stole This Riff they come up with something that sounds a lot like smooth Californian 70s pop/rock, even while spoofing the self-same sound. Deepsea Diver Song could possibly be one of the most bizarre things they’ve ever done – an almost straightforward folk pop song. King Kong has some wild and superfast picking from Snakefinger, he really gets the chance to shine on this track.

Whole Lotta Love is the basis for the title song, in between electronic squeals and a church organ/The Impossible Dream-style ending. The latter half of B.S. reprises some of the live performances on disc one, but Hallowed Be Thy Wean seeks to stitch together some of the other numbers that made up the band’s earliest set into a whole. The dream-like Pink Lemonade starts things off, but during the course of this one long track, acapella, wild electric whoops, skewed country and western, off-beat jazz dance and a loads of other noises are scooted across with the Residents’ own personal élan.

Logically enough the bonus track on this disc is of the band’s third live performance at a party for someone called Chris. Apart from this detail, little is known, but the set follows roughly the same format as the previous two live selections. A similar, but more coherent announcement precedes the cacophony of Somethin’ Devilish and there’s a fair bit of acapella and squawking sax. The sound quality this is pretty good and it all ends with a music box finale which gives way to another pretty good audience reception. This second disc of A Nickle brings the curtains down on the pre-Residents activity, as at the end of 1972 Santa Dog would emerge and from there a whole spectrum of sound and ideas mushroomed.

Along with the discs here we get and extensive sleeve note and some valuable images of the pre-Residents at work on stage and in less guarded moments than have been seen before. The Residents were drawing their power for the all out assault of Meet The Residents with these recordings – their barbs at contemporary America and its culture were already in development by the time of these efforts and it is great that we finally get to hear these mutations taking place. There’s a tonne of neat little pointers to the future to keep Residents buffs happy on A Nickle If Your Dick’s This Big and if elements have seeped out over the years (most notably on the WB RMX LP), it is great to hear as a whole. As a enthralling collection showing a one of a kind band at a crucial early stage of their development, it will prove hard to beat.