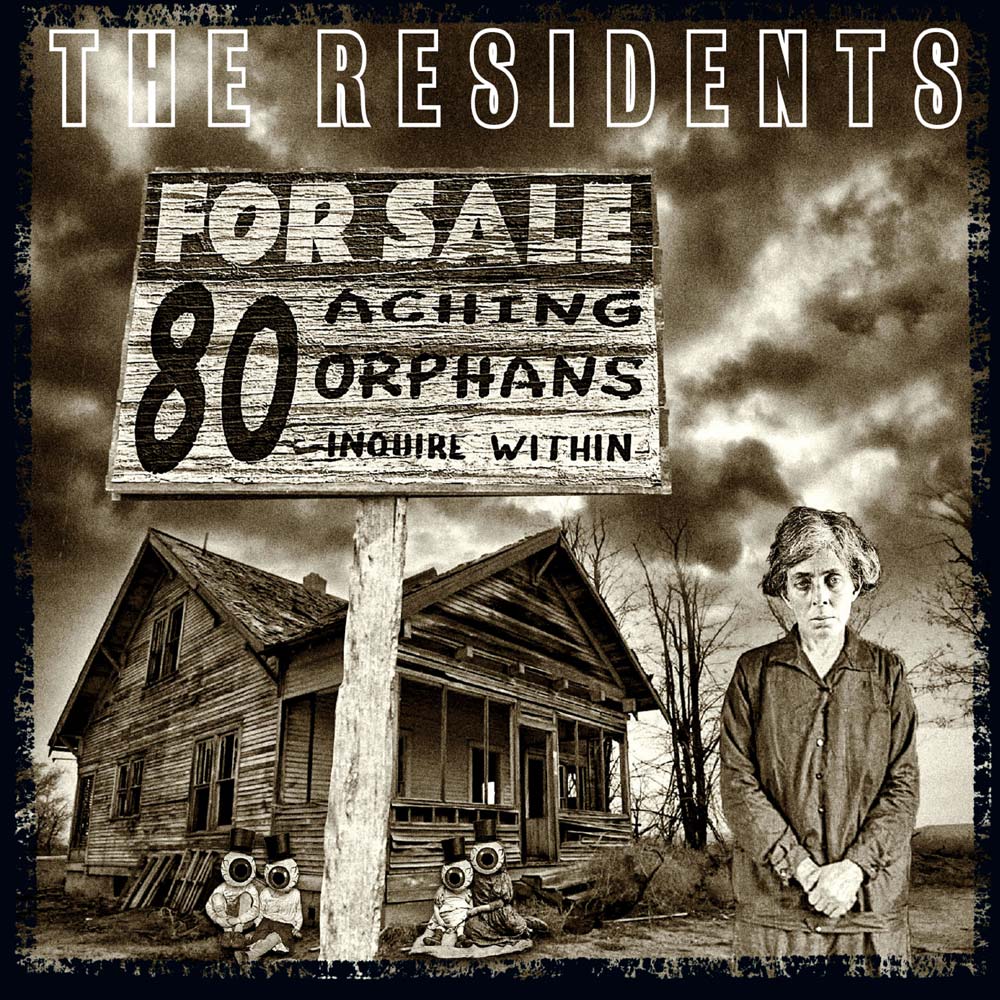 Subtitled 40 Years Of The Residents, this new boxset features 80 selections from across the years by the anonymous, eyeball wearing conceptualists……LTW’s Ian Canty looks at the incredibly strange world of “Louisiana’s Phenomenal Pop Combo”…………

There’s a quote from Albert Einstein in the inside sleeve of this new collection from the Resident archives which sums things up succinctly. It says “The world is always ready to receive talent with open arms. Very often it does not know what to do with an octopus”. The Residents were an octopus of ideas, reaching out in several directions at the same time. Some people found that difficult to comprehend, so much so it made them angry. They just couldn’t solve the enigma.

Take for example their 1976 single Satisfaction. The A side is a noise rock deconstruction/demolition of the Rolling Stones classic, but even if you got into that what was waiting for you on the flipside? Loser (is congruent to) Weed’s scuttling electronic weirdness would have you flummoxed. Where were they coming from? All over, that’s where. Was it much better to enjoy the ride than try to figure out what on earth was going on?

The Residents’ story seems to have begun in Louisiana in the mid-60s, with the group commencing their recordings at the end of the decade (though one can’t be too sure as the band have always kept the information about themselves closely guarded and are liable to alter things along the way too). A rejected demo tape, which was eventually issued in an abridged form as WB: RMX in 2003, was returned by Warner Brothers giving the band their name. It was marked for the attention of “The Residents”. The die was cast.

Their first officially released material was the Santa Dog single, actually a two disc vinyl pack in the form of a bizarre Christmas card. Fire (Santa Dog) from that single is the first track here and it sounds incredible, like some very weird New Wave single but 6 years early. For it was only 1972, the era of Glam and Prog Rock. But then again they were always seemed to be ahead of the pack. Post Punk before Punk had actually happened. It appeared that they were bored with and filled with contempt for the samey Rock scene (hence the “Third Reich ‘N’ Roll album) and full of purpose to explore beyond the confines of “normal” Popular Music. They set their own rules by dispensing with the ones used by everyone else. Music was constantly being reshaped by the Residents with a restless need to subvert norms and present their own (twisted?) narrative vision.

Though closely guarding their anonymity, they did on occasion engage other musicians in their exploits. Tooting born guitarist Phil Lithman hooked up with them prior to his stint in Chilli Willi And The Red Hot Peppers and collaborated with them in an on and off basis for much of the 70s and 80s. Of course there was also the Mysterious N Senada (or was there?), who became their guru and provided them with the Theory of Obscurity which saw the Not Available LP languish in the vaults until everyone had forgotten about it. His Pollex Christi Part 4 as rendered by the Residents in 1997, apparently on the occasion of his 90th birthday, is included here (Disc 4 Track 19).

Over a year after Santa Dog came their debut album Meet The Residents, the doctored cover of “Meet The Beatles” giving rise to the first, possibly self-generated, rumours that they were in fact the Fab Four playing some sort of elaborate joke. A second LP Third Reich Rock ‘N’ Roll came out just as Punk was making a breakthrough in 1976. Its use of spliced up, deranged versions of Garage Rock classics in lampooning the cynical and safe music industry was revolutionary. The aforementioned Satisfaction single followed and after that saw concept albums like Eskimo being released alongside more theoretical items like Fingerprince (originally meant to be the world’s first three sided LP).

The Residents’ (in)fame reached its height in the early 80s with the Mole trilogy albums, with the photos of the band with huge eyeballs on their heads posing at the Golden Gate Bridge becoming their visual calling card. Although the elaborate stage show that accompanied it drained them of funds and energy, as the years went by they became increasingly involved in the visual element to their work (though not to the detriment of the music), which has resulted in some spectacular live performances. There was always a purpose to what they did and that solidified into some of the strangest concept albums imaginable. The story-telling records continued right up to their recent and excellent Ghost Of Hope album (reviewed here).

So onto the box itself. Over the 80 tracks we are provided with on 80 Aching Orphans we take in all of the above and more. It would be difficult for most artists with a 40+ year career to have a compilation like this that hangs together despite being no-sequential, but somehow they pull it off. Tracks from the 70s sit side by side with recent waxings and they don’t seem out of place. I suppose the point being that they never really deviated from their original vision, so continuity is there even as we jump back and forth through the decades. There’s a lot to get to, so I think it best if we methodically work our way through the set to give you at least a taste of what is going on here.

After Santa Dog (Fire) kicks off disc one, we have Amber from brilliant Commercial Album, my own personal introduction into the world of the Residents. This 1980 platter featured 40 one minute long but accessible tracks (also the length of a commercial – they loved a double meaning). It helped that it featured two of my favourite artists of the time in Andy Partridge and Lene Lovich as guests. Amber is beautiful and showed how they could construct something entrancing, mysterious and wonderful in a mere 60 seconds. A scaled down version of James Brown’s This Is A Man’s Man’s Man’s World follows, from the George and James LP which matched up JB with Gershwin, which somehow keeps the Soul whilst being fed through the Residents’ blender (though they were always fans of the hardest working man in show-business as the story in the middle of Mr Wonderful, which is the last track on Disc 4, attests).

Further on into Disc 1, Blue Rosebuds is the perfect Residents Dream/Nightmare scenario, with a gentle, memorable tune and that eerie but upfront trademark vocal – it could have been the accompaniment to the weirdest sort of puppet theatre at the edges of imagination. The Car Thief almost has an I’m Not In Love/10CC vibe to it, it is elegantly put together and light, despite being about 9/11. Further on a 1990 live version of Shortnin’ Bread is pleasingly primitive, almost an echo of their second LP and Eloise’s insect voices gives us a taste of Vileness Fats, their ill-fated cinematic adventure.

The Eskimo album from 1979 is often regarded as their masterwork, but the Dikomo single which scooped together the LP’s melodies and nailed it to a Disco beat is a triumph. Oddly enough, it wouldn’t be the last time they got people grooving. As we move onto disc 2 with 1986’s Kaw-Liga, it somehow became a firm favourite of the early Ibiza Rave scene and was remixed many times. Only the Residents could make a Hank Williams track a Balearic dancefloor killer and not be aware of the fact. Hard And Tenderly marries a Garagey sounding organ to an odd sort of Chamber Music, but topping it all guest Todd Rundgren gives The Aging Musician just the right amount of pathos to wilt the hardest of hearts. A magical piece.

Disc 3 brings the extraordinary 1977 single A side Beyond The Valley Of A Day In the Life – this cut-up of the Fabs interspersed with their own unsettling Residents music pre-empt the use of sampling by a good 8 years. Edweenam, an excerpt from Not Available, beguiles by being light and tuneful and shows that the Residents were not afraid to delve into acapella, should the situation warrant it. In fact anything was fair game for them, from Sousa marches (Semper Fidelis on disc 4) to Polkas, anything apart from the expected. Smelly Tongues comes at us right from the first album (it was recut as a single by Snakefinger in 1978) and the 1978 version of Santa Dog retains the basic idea of the original but feeds it skilfully through electronics. The Knife Fight is a piece straight out of musical theatre given the Residents treatment, dramatic and thrilling even without the visuals.

Finally reaching disc 4, Boots also from that debut LP throws in a bit of Doo Wop to confuse you and coming from Third Reich ‘n’ Roll the version of 96 Tears does stick quite faithfully to the original, even though the sound is obscured. The Black Behind from 2006’s The Bunny Boy features the line “pretending not to care” and it strikes me that could be the motto of the Residents – they obviously care greatly about the fine detail of their work all the way through the 40 plus years of their career, but pass it off lightly with their own flip humour.

This new collection provides a tantalising glimpse into the world of the Residents. To newcomers it is an excellent primer – if you have an adventurous mind and ear, don’t worry, dive on in, the water is lovely, if a little dark. Fans will argue long and hard over the omissions and inclusions, but for me it perfectly does the job it set out to – encapsulating the weird, wonderful world of some of music’s sharpest minds. Typically this boxset has wry pen pictures of each song that will as much throw you off the trail as enlighten you. But that’s the beauty of the whole thing too – they will confuse and bemuse you, but also amuse and enthuse you, it’s all part of the fun, part of the Residents’ circus. 40 Aching Orphans is a testament to inventive thinking and music outside of the norm, pushing out against boundaries at all times.