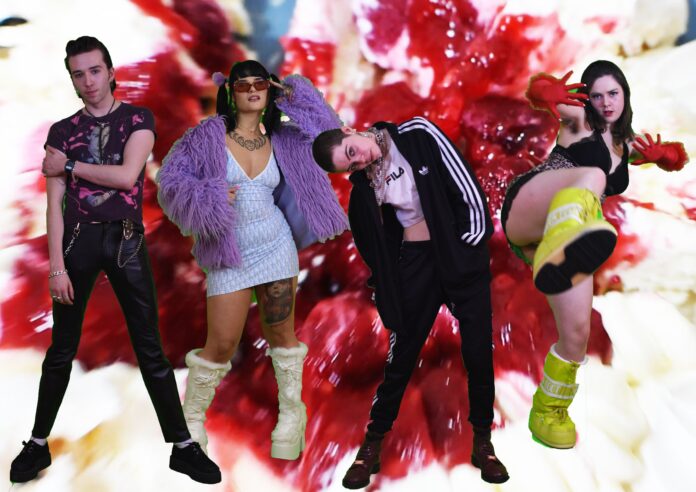 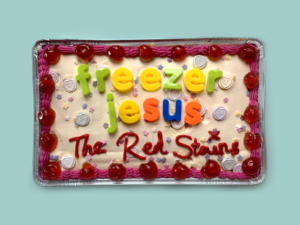 ‘The consumers, whose naïveté is confirmed and drilled into them, are to be dissuaded from entertaining stupid ideas about what has been packed into the pills they are obliged to swallow down. The simplicity of the times past is translated into the stupidity of the culture consumer who, gratefully and with a metaphysically clear conscience, buys up the industry’s trash’. Adorno, 1970.

The Red Stains mediate on the monotonous, make sense of the mundane, the mechanical rhythms of accelerating escalators, glossy floors, and glamourous catwalks from the view of the barren streets with their exciting new single – Freezer Jesus.

So when primitive Manchester-oriented post-punk four-piece, The Red Stains present a song which cleverly, catchily articulates a bundle of emotions and batch of ideas relatable to the silenced, side-lined ‘voices of a generation’, not quite lost but simply swept under the imperial carpet with added plight due to disillusionment and the forever unsettling, always setting yet never solidified concrete walls of disappointment, ‘yet still sold the old myth of the consumer religion, to just keep shopping’, they are imploring us all to think about the same pool of horrors of their common honesty, which is so prevalent it is unavoidable, so potent resistance is hopeless and we simply have to sit there and swallow it. 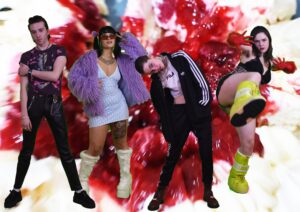 The first since Mannequin in April, Freezer Jesus is an invitation to Emin’s bed, a bold burst of assertion, a brilliant lifting of the lid, an acerbic spilling of the insides which occupy that pit at the ‘heart of an unequal, aggravated society’. A society coaxed in from the cold by the warmth of the slick, sunny encompassment. A society mollycoddled and indulged by the lacquered magnificos, the sweet-cheeked sales assistants, and military-neat shop managers, themselves afraid to admit for fear of being sentenced to death by the designer guillotine sleeping in the stock room, that such a hyperactive moment in history, is well past the threshold of overkill.

Shopping centers are the churches and we’re all whores for the discount, on our knees in these metropolitan houses of worship. Everything under one roof. God supplanted by whatever the shelves are stocked with. We can’t really tell if we’re on our knees out of prayer or we’re picking up the pieces of something we liked about our former selves, only be lost to the bottom drawers of a uber-cool past gone ultra-balmy damaged. Each aisle in this airtight, succulent fear with simulacra patterned wallpaper and caramelized stars, always leading to another aisle and another and another. Each pristine, king Image leading to another Ideal and another and another, until to be unlike and other, is to be uniform and bathed in last year’s scrutinizing news.

Yet still a sense of pleasure, a detection of elevation in the air, lingering like drugstore perfume, gleaming like the white teeth of the meeter-and-greeter with a nametag which should read Help Me or Go To Hell, rather than Here to Help. Yet they experience a source of enjoyment in these uncertain, surrealistic environments we find ourselves walking through and plodding along to, and readily, fleetingly divorce their fragile, fragmented selves from the endless forces of destruction and decay and damnation often seen lurking upon every surface and around every corner. Bow down, on both knees, before the empire’s squeaky-clean revolving doors, the freshly painted, newly lubed golden banisters, unaware of course that the sound being made is the mocking, haunting squirms of the writhing earthworms in the dirt those ethereal, industry genies take you for. 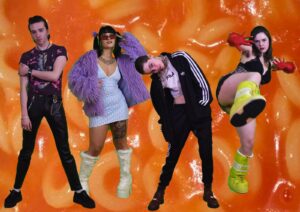 The song is a slap in the face until our heads are sent spinning and almost remove it from the shoulders it sits upon. A piece of chewing gum firmly lodged between one spoke of the clockwork and another which keeps each item, and each image, gushing from the jaws of a conveyor belt in a baffling continuum. It begins with a brooding awakening of sparse, dub bass, more Bunny Lee than Bunnymen, and the pace-caged of vocals which, with every whisper, spin another web and serenade the shoppers suspended in a technocultural stupor from afar, before snapping them in half still clamoring for the menswear section and shattering the brain synapses to pieces.

But soon enough, the minimalism, the honesty, and nakedness of the song are joined by the hysterical yelps, hisses, and screams of Styrene or Banshee, the tumbling, the stretchy, asymmetrical vibrancy of the Au Pairs their sexy, constructivist intersections between drums and bass; the awkward stomp and intellectual ejaculation of early Elastica; to the succinct, giddy, electronic jolts of Sleaford Mods or cosmic/computerized comedown malfunctions of Autechre’s NTS Sessions; skanking and snaking and erupting more and more with every abject pounce and shuddering, pulse in the blood like Linder Sterling’s surgically-sharp, radical postfeminist photomontage assaults coming to life through hissing sizzle of sherbert-dip-on-the-tongue pop song structure, but with a deeper, darker, perturbed, disconcerting amusement of imagery always not far behind.

The scathing, cynical sentiments which tap against and tear into the ideologies of shop-until-drop-dead and be shoveled out of the establishment by the sales assistant on shift is further augmented by a video. A sumptuous Situationist drama, a piece of profane performance art with its inclusion of an enjoyable decapitation of some dolls with a kitchen blade, a nun drenched in alphabet spaghetti, gateaux being gutted, the Arndale being invaded by a moving bricolage of 70s polytechnic postpunk misfits and 90s Britpop loudmouths, carrying a classic Penguin paperback in one pocket; lipstick and Wilko’s Stanely knife in the other. In fearless pursuit of something obvious to pick on, something old to pull apart as the scenes within and the streets outside are weened on the udders of all wanton, dogmatic means, all without ends.

All facets of this fast-moving, deliciously delirious picture, which one could argue pay homage to, with its rich, kitsch features, the films of Andy Warhol (Poor Little Rich Girl from 1965, The Velvet Underground and Nico: A Symphony of Sound from or The Chelsea Girls from  1966). The king of turning consumer culture, the fetishisation of everyday life, the self as something which can be bought and sold, as embodied in the objects of everything from Monroe to soup and equating those kinds of embalmed, cultural reference points to the same tip, above God, above all else (doomed to consume or be consumed) into commercial art as a way to expose its true self, its primary essential roots, its intoxicating, diptych design, and, in doing so, laugh at its omnipotence and permanence upon the flesh of the currently hellish Covid climate (consume to be cured).

It’s a strategic, systemised, satisfying way to infinitely, acutely attack their apostle psychology. Every cubicle a compressed, confessional chamber; and each sharp, square inch of space is increasingly clogged with another glistening garment, thrown onto the data scapegoats and the shuffling public shopping themselves to the edge of the earth where a landfill of headless corpses belonging to the carnivorous, camera-grabbing swarm, of chickens and cockroaches, pigeons and peacocks, kittens and pills, mannequins in glasshouses, swipe their credit card one final time. All tactfully orchestrated from the fitting rooms as the surveillance camera records your reaction and replays it on the giant skyscrapers and modulating inner-city citadel monitors to inculcate the charmed mass in following similar patterns of behavior. Charm? Yes. Charm them into wanting the same special, sadomasochistic experience, the same raw meat, the same broken trip, the same bent trend. 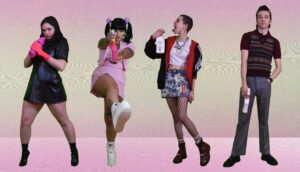 In today’s culture, one obsessed and immersed with image, where to be online is to be outside, to be addicted is to be afflicted, in which shopping is an obvious, efficient vehicle to carry such a contention– to rectify and resolve such an issue, by supplanting it with something sincere, purposeful, wholesome, and truly Happy, not just advert-happy, it takes more than just sticking of the two fingers up at what the pious professional impresario, and entertained ensemble of moguls who sit hunchbacked with their manifestos around large, dark, marble tables, deciding what should be the next stage of human evolution according to the size of one’s waist and the style of one’s haircut, and all those big, brash brands unfold onto, flattens and overshadows.

Rather, it takes shoving those two fingers down its throat until expelled of all impulse, exorcised of its ‘collective addiction to consumer culture’, its tired diets for the robotic eroticisms reduced to a pathetic pile of nuts and bolts when the rug is swiftly removed from under them all. The raw, rotten nature of the trade is revealed as a shallow exchange, a shattered attraction, a cigarette burn in the megalomaniac’s silhouette, as calculated intimacy, as corporate clothes-on porn, as refining of behavioral science by way of what’s in the basket, by who’s in front of the target: the losers on the street, the loners on the breeze. A lot like the lyric, with tongue so firmly in cheek it penetrates the surface of this unremitting swell of subliminal evil, which because once upon a time, Frankie Said Revolt, will too surely one day be printed on a t-shirt (irony yes) and catch fire, which howls – ‘Well the joke’s on you, cause I’ve seen Jesus, he was buying chicken nuggets out an Iceland freezer’.

The Red Stains should’ve been signed to New Hormones. They still should.

The Red Stains are –

Ryan Walker is a writer from Bolton. His online archive can be found here.

All Photos copyright held by Natalie Wardle – not to be reproduced elsewhere without permission.