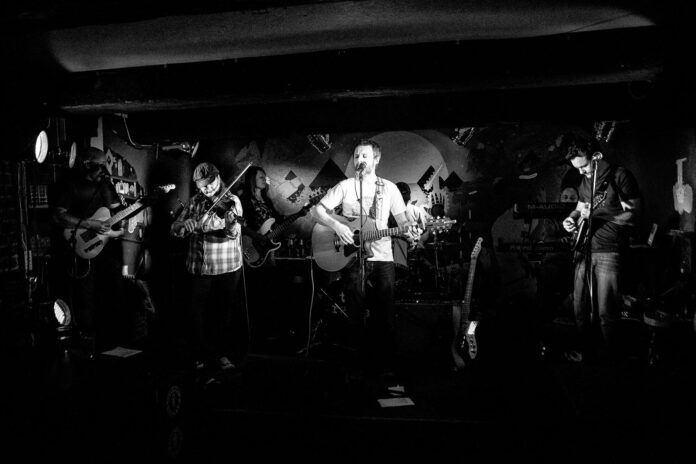 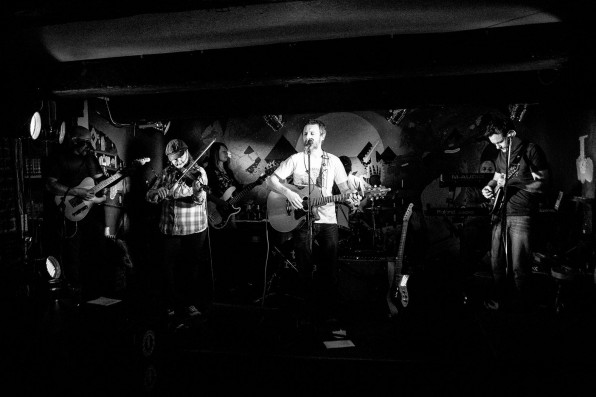 The Reads tag themselves ‘ambient-electro-folk-rock’ and Louder Than War’s Rebecca Sowray finds them bigger, stronger and more eccletic than ever.

I walked into Telford’s on a Saturday night to the divine sound of band plus amplified violin in sound check.  Quite honestly, and as much as I indulge in guitar worship, this is one of those moments I’m going to remember. Of the track itself though, more later, because it ended too soon, consumed in the hum of voices in a busy bar.

Telford’s Warehouse, down on Tower Wharf, was bohemian well before the accusation “hipster” was rescued from the beat generation and re-used as an insult for new urbanites. The walls boast artwork, sculpture, ironwork. There are loads of staff on, even more serious beer and an ambitious chalk board gig list. A phrenology bust, TV cabinets and a totally un-ironic 70s wall clock.

The Reads open with Lost at Sea. It reaches and evokes; something sad in a familiar way. They use prog rocks ambition to create something unique. They’re technically accomplished, the shift from recorded live is more than seamless, there’s power and restraint in the sound. Stuart Bennett as lead vocal has a voice that matters.

They’re bigger than any space they’re in, The Reads are. Ambient-electro-folk-rock, as they tag themselves, is a mixing of parts. Warm and encircling sound, electro in a deftly handled techno-genius sort of way and the folk and rock bits are twins. They set off from the same place, and understand each other as only twins can, but we know they’ve got different stuff to say.

And then there is the lovely Scarlet

Scarlet is a product of the band’s usual effective collaborative writing process and the impact of their guest fiddler Clare “Fluff” Smith. Now there’s always something weirdly perfect about a fiddle in a rock band and Scarlet is no exception. (Go on, listen to the track. This isn’t orchestral violin added for its mournful, Technicolor, dolby-esque glamour by those who ought to know better.)

And if the stage isn’t big enough for these guys in the physical sense when they’re playing at a full-strength plus fiddle it doesn’t stop them working with each other and being aware of each other musically. For that matter whilst an orchestra would consume more floor area they might use fewer instruments. At a simple count I get as far as ten, throwing in some usual percussion additions, a mandolin, guitar switches and more besides. 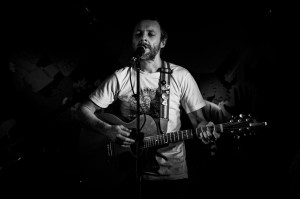 A switch across to Counting Your Greys, which edges just the right side of maudlin; precise and layered; knowing the value of space between musical lines. And a crisp, tight new track with My Grumpy Nephew Actor.  There are a couple of switches of style within that, an out and then a return, with the speed allowing you to revel in some magnetic vocal harmonies.

Whether new material or old for The Reads I’m always dragged into their lyrics.  With the two new tracks, My Grumpy Nephew Actor and The Abyss I want to hear them again, partly because they create that need, but also to get the lyrics in my head and see what images are carefully tied into them.

This is the first time I’ve heard The Reads do a full session on a stage that was theirs alone. It would have been very easy to have listened to a double set; a pleasure indeed. They re-wrote the set list too for a request, the dark-light, Love or Be Loved, that balances lyrics of seeming opposites against melody and rhythm parts to offer a quiet menace. As perfect as it is to listen to them on the radio they are very much a live band.

The first song I properly fell for of The Reads; the one the other tracks still have to get in line behind, for me is Avalon; because the world needs more guitar lines like this, as well as lyrics that force thought from you, willing or not.

Twelve Lines of Life and Nothing Bound are played as a set, to close. The audience became a mad-Chester crowd for these last two and the tunes were melodic, hard edged, strong. I’m standing in my favourite sweet-sound-spot for Telford’s and learning just how far the floor will bounce. It ends as all the best gigs do, too soon.

Chester and the world needs more of this and another album from The Reads please?

All images with thanks and copyright to Paul Couzens.

All words by Rebecca Sowray. Rebecca can be found on Twitter and her Louder Than War Author Archive.