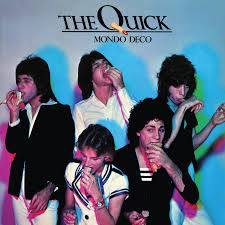 Reissue of trailblazing LA Power Pop/New Wave band the Quick’s 1976 debut album, with bonuses of 10 pre-LP Mercury demos and an unreleased version of Anybody….LTW’s Ian Canty hears the right band in the right place at the wrong time…..though today is now the right time, apparently

The Quick formed in 1975 in Los Angeles and the music they cut included on this re-issue is the perfect musical snapshot of that city and time to the outsider, full of sun, thrills, teen angst, ill-starred love and danger. Songwriter, guitarist band bandleader Steven Hufsteter started jamming on his songs with drummer Danny Benair, bass player Iain Ainsworth and lead singer Danny Wilde came onboard a little later. All self-confessed Sparks geeks (though also in love with the brash UK 60s Pop of the Who and the Move), in 1976 they came under the radar of 1960s LA huckster Kim Fowley, who was trying to form a scene around his proteges the Runaways.

Fowley quickly agreed to take on their management and furnished the Quick with a keyboard, allowing Billy Bizeau to become a fully-fledged band member, which completed the classic line-up. As the Runaways were already at Mercury Records, it was a simple step to get the Quick a deal too. It came to pass they were signed by the label and quickly it was agreed an album would be cut with Sparks’ guitar player Earle Mankey behind the boards.

If all seemed to be going swimmingly, things were about to come to a crashing halt. Fowley did his dictator bit in trying to tell the band what songs they should include on the LP, but the Quick were not for backing down. They would not be mere puppets for anyone. Suitably piqued by being met with insubordination and not blind obedience, Fowley basically bailed from his job of promoting them and the debut album was released on the back of almost zero publicity. Which of course meant the record flopped. This was unfortunate, as the LP showed the Quick to be excellent tunesmiths, but the general verdict in LA at the time was they didn’t quite capture their gifts effectively on Mondo Deco. Listening to it now, you struggle to understand quite how they missed out on success, but perhaps the slightly tougher pre-album demos realise their potential better and show more what the critics and fans wanted.

Had the LP been a hit, this could have been the ultimate “on the cusp of Punk/Post-Glam” product. An album packed full of brash but expert playing, soaring melodies, quirky musical quotations from the classics onwards allied to dreamy harmony vocals and keenly observed songs that sound as fresh as the day they were cut 40+ years ago. My Purgatory Years is the fulcrum, a shiny-bright rites of passage story/teenage frustration anthem. It is a classy piece of songwriting, right up there with the best Power Pop has to offer. This one is probably heard better in the more raw demo version (it is one of the bonus tracks), but in any form it is a near perfect piece of music, capturing the unforgiving “growing up” years sensitively and with real accuracy, plus a stunning but simple hook-line.

There’s little point arguing that they don’t sound a bit Sparks on Mondo Deco, Wilde’s mannered vocal is very like Russell at times. But they’re a good Punky version of the Mael brothers’ band and their musical power and lyrical obsessions put their own stamp on things. Though you could argue they were the right band in the right place at the wrong time the Quick, on hearing in 2018, they tick all the right boxes. Their great playing is married to the kind of golden melodies Weezer would sell the Fonz for. The tough guitar contrasts beautifully with the keyboards on Playtime (Bizeau is on top form throughout) and the marching beat of Last In Line prefigures the New Wave Pop of two years later (and betters most of it). The 60s influences all come together on the sparkling Don’t You Want It and Anybody has a great drum sound that drives it along. But in the end picking highlights out is difficult, because Mondo Deco works so well as a whole.

The album itself was good enough, but for me the pre-LP demo do catch the band slightly better, lighter, looser, in more playful mood. On Mondo Deco, the music is perfect, but perhaps a little too perfect for the rough environment that was undoubtedly on the horizon in 1976 and for a band that could really cut loose when needed. Along with the songs that would soon be re-recorded for the Mercury album, the demos include a jokey fragment of Born Free (yep the Matt Monro number!) and old tune Teacher’s Pet. The cracking Heaven On Earth is topped off with some truly great singing by Wilde, somehow this one managed to be left off the LP, a shame as it is excellent. There is also an unreleased outtake of Anybody which manages to squeeze a little of Everybody Needs Somebody in.

After Mondo Deco tanked the band left Mercury and set about making a clean break with their past. The Quick’s concise and powerful sound had influence on the local Punk scene and they had fans in many of the bands that were forming in its wake. Seeing the change, they mostly dispensed with their old set and updated their sound in the face of the Punk boom, all the while never forgetting their pure Pop roots. 1978 saw issue of the 10″ Alpha Beta EP on their own label (which was cut down to a two track single Pretty Please/Somewhere Over The Rainbow, released under the banner “In Tune With Our Times”) and they featured on the Saturday Night Pogo album under the pseudonym the Young Republicans with Guardian Angel.

Some interest came from Elektra and it is easy to see how the Quick could have sat comfortably next to their big CBGBs signing Television. Sadly, the demos undertaken did not result in a deal and the band split up for good in the late Spring of 1978, cruelly when the New Wave scene that they partly helped inspire was really only just kicking off. Danny Wilde went onto joining the Rembrandts (most famous for the theme of the Friends TV show) and Hufsteter penned songs for the Dickies before being a founder member of the Cruzados (which was the follow on band from Punk legends the Plugz).

Though we are a long way away from Mondo Deco’s day in the sun all those years ago, this record is still pretty much the perfect soundtrack to summer. That one brief moment in time when you woke up in the morning feeling so alive it hurt, wishing things were better and you were understood by your perfect date, but realising this point in life was pretty good anyway. The Quick’s talent bottled the Power Pop genie and they wrote teen anthems that not just felt authentic, they were. Mondo Deco is the best 1976 album you haven’t heard and you might like to rectify that post haste.