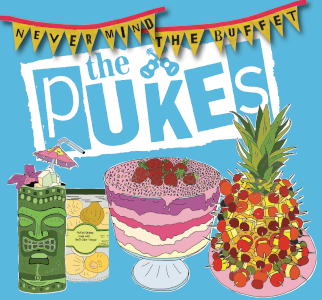 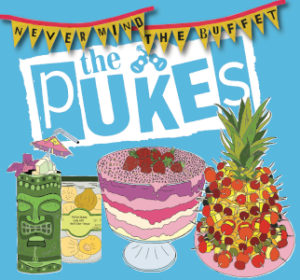 It seems like The Pukes don’t take themselves too seriously, but appearances can be deceptive says Nathan Brown as he listens to their latest CD of upbeat folk with punk rock roots.

The Pukes: top name. Never Mind The Buffet: great play on words. When The Pukes first hit the scene, they were refreshing and new, and fun. The first time I saw them in about 2012 there were hundreds of the blighters and it seemed no stage was big enough. What the Pukes did was great because they played everybody’s favourite punk songs. We even went to the launch gig for their first LP in 2014 and it was rammed. And when the Pukes did this back then it was before peak ukelele had hit and they were fairly unique.

The Pukes have shrunk down to a 5 piece, and this album is not covers, it is all original songs.  On this new offering, lead singer Debs is channeling the spirit of Kirsty MacColl, with an occasional country twang. There are punk rock interjections and punctuations here and there of course – a “1234”, a Ramones style “Hey” or two – but overall there is way more of a folky skiffle feel than a punky vibe.

The backing vocals occasionally provide some call and response shoutiness but more frequently go down the melodic route. It’s in keeping with the sound that The Pukes now seem to be aiming for.  You’d be forgiven for thinking they want to move away from the punk sound.  And they are good at what they do, and whilst I’d call it folk, indie-folk I wouldn’t go so far as to label it folk-punk (for folk-punk see The Pogues and other raucous outfits).

There seem to be a fair few love songs on this album, but not all straightforward. On the song AC30 the love affair is with an amazing old Vox amplifier – staple of 1960s British rock’n’rollers and reputedly loud enough to play the Albert Hall without a PA.  It’s a great punk song that deserves to be belted out on loud guitars to reach its full potential.

It’s not all love though:  Tales of the road Angel of the North; The high speed, low pay travails of the modern world get a look in with No Time and Zero hours.  Old And In The Way addresses the isolation of aging – a crisis in this country. And I’m left wondering if Google It Bitch is about someone else trying to take The Pukes moniker, or their idea. They certainly ain’t happy. Watch out for their iron fist!

Lurking beneath the surface of Mind Games, Old And In The Way and One In A Million are Cock Sparrer style songs. Taking a lyrical cue from the Ramones, Polly was a punk – but she didn’t know. You want the lyrics and chords so you can sing along? They are included on the insert, with a link to more on their website.

But not everyone wants to sing along. I played the CD to Pete. He is punk as fuck and he is not happy. “It’s not The Pukes as such. It’s ukeleles in general. Now you can’t go anywhere without someone twanking away like George Formby or a Honolulu Luau. And they all think playing Teenage Kicks makes them edgy. But they still sound like a Village Hall choir.”

Pete is starting to foam at the mouth, “It’s all just a bit too twee and folky for my tastes. It’s like the musical equivalent of The One Show. Perfect for vicars and village fetes. And another thing…” I got the message so made a hasty exit to escape the shower of gob and expletives.

There is something in what Pete says. Whilst I can still hear the punk essence buried in the songs, I am left wondering if The Pukes have made a deliberate ploy to tone down the punk rock, or if this was something that just “happened” in the studio. Have The Pukes started to take themselves too seriously? When you take yourself seriously the party is over. And for a fun time band like The Pukes the party is part of their DNA. There’s a risk that they could lose a bit of the magic.

Playing punk covers played on ukeleles was wonderful not because of the ukeleles but because of the well loved punk songs. Take away those punk songs and you are left with ukelele driven upbeat folk. I am sure that the band will still knock out a good time live and I think that is where their forte lies. But for me, that energy hasn’t quite been captured on this disc.

No ukeleles were harmed in the writing of this review.

You can buy the CD direct from the the band.