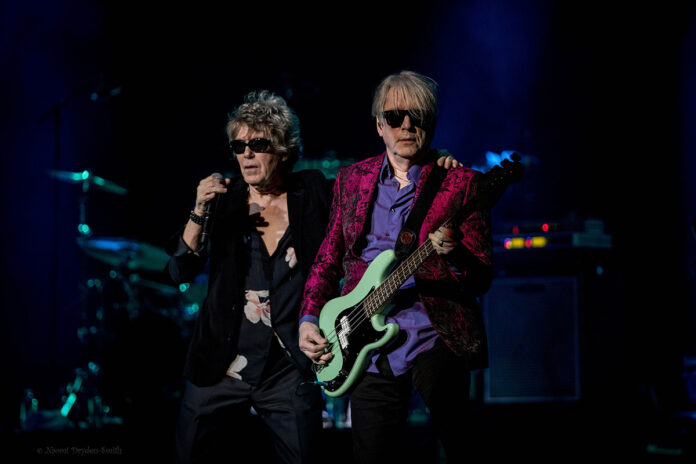 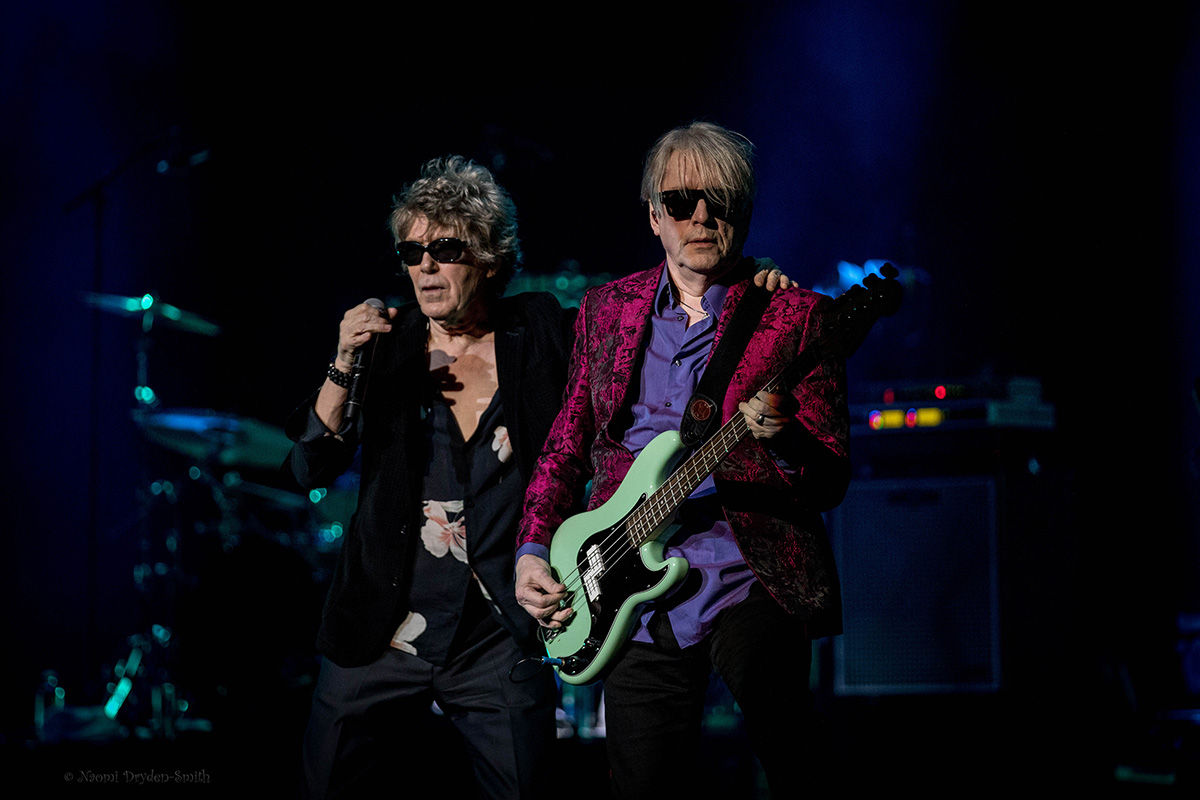 Third time lucky, The Psychedelic Furs finally make it to the Royal Albert Hall for their very special show celebrating the release of critically acclaimed album Made Of Rain in 2020.  They bring with them recently reformed Wasted Youth and Jah Wobble & Invaders Of The Heart as special guests.

From The Lexington to the Royal Albert Hall in a matter of days, as recently reformed ‘70s post punk outfit Wasted Youth take to this iconic stage it’s still quite early and the Hall is not yet half full – a lot of people are milling around in the various bars, oblivious. Meanwhile original members singer Ken Scott and guitarist Rocco Barker cut a striking contrast; Scott menacingly goth preacherman, with hat and walking stick, against Barker’s yellow ruffles and shades. Together with Ray ‘Sonic’ Hanson (Thee Hypnotics) on guitar, Hans Perrson (Flesh for Lulu) on drums, Barker’s wife TC (Miranda Sex Garden) on bass, and original member Nick Nicole on tambourine, they deliver their six song set loudly and efficiently; set highlights are Paris France and finale Do The Caveman, which in these civilised surroundings is missing a serious mosh pit and beer chucking. It’s a great set by a legendary band who predated and may well have been an influence on how The Jesus And Mary Chain looked and sounded some years later. Those who stayed in the bar instead of witnessing this missed something special. 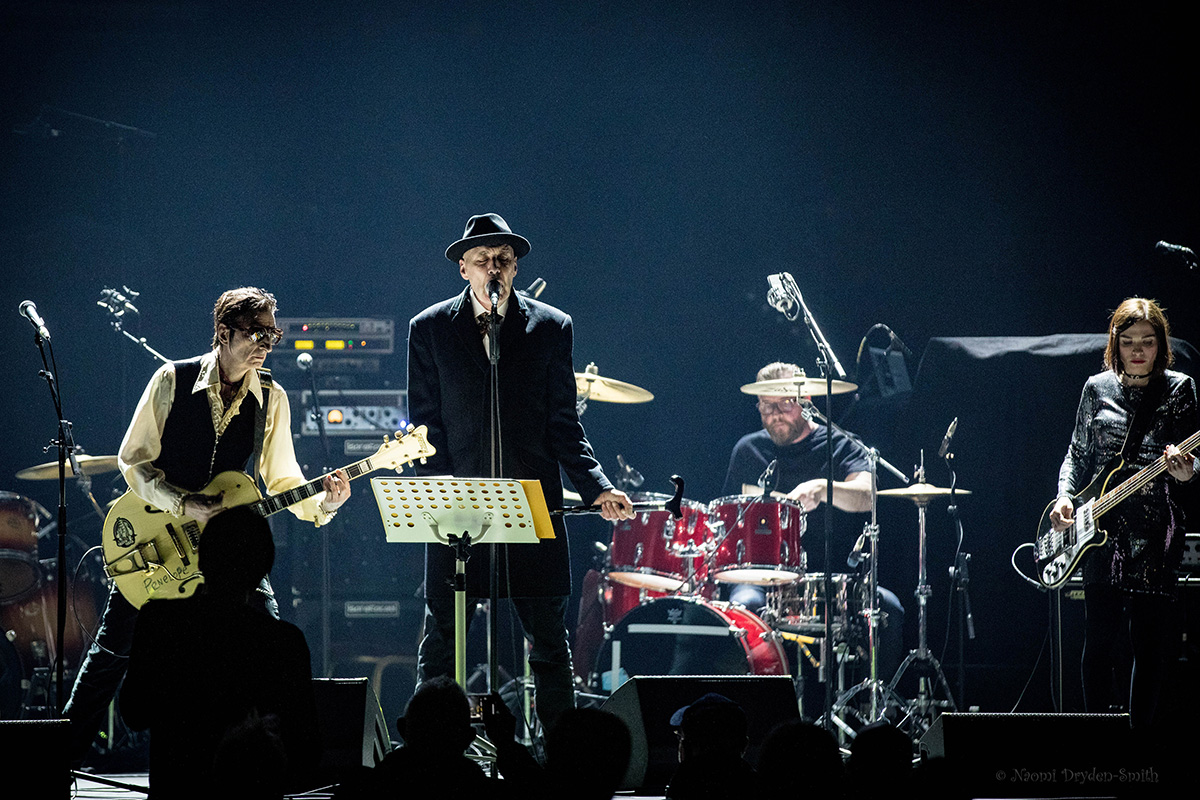 Jah Wobble & The Invaders Of The Heart are up next. Opener Seven, a wall of discordant jazz funk, falls away to more comfortable dub sounds and there’s a version of PIL’s Socialist and cover of Fleetwood Mac’s The Chain.  Wobble is entertaining as ever throughout, with a continuous flow of chat and jokes. The set ends nicely on the laid back Visions Of You, which sounds immense in this venue, even despite the lack of Sinead O’Connor. 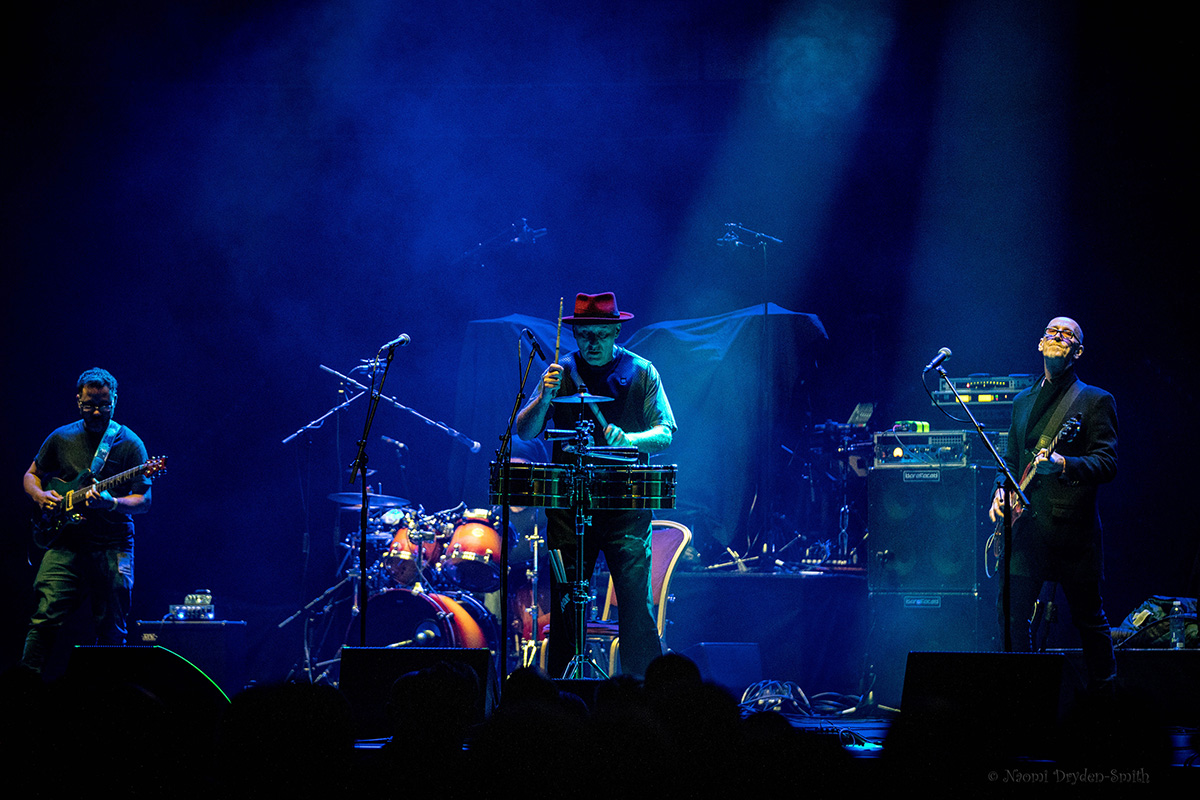 At last, it’s time for the Furs (beyond time actually, they’re running late).  They’re one of those bands who reached deep into the soul of a slice of youth during the ‘80s and have never relinquished that grip. Understated yet passionate, intense yet accessible, and now with brand new material that’s progressive but at the same time tugs at the heart with nostalgia.

Whether it’s the current line-up, which sees the Butler brothers surrounded by an intensely strong musicianship, the quality of the songs both old and new, or just their sheer energy, the Furs continue to be one of the UK’s most important bands, relevant just as much today as they were 40 years ago.

Personally, the arrival of Made Of Rain during the depression, solitude and anxiety of the first lockdowns in 2020 was a blinding ray of purple sunshine. When I first heard I Believe, with its dense wall of guitar pierced by resounding sax, I was totally confused because I thought it must be a track from Forever Now which I’d, surely impossibly, missed.  You’ll Be Mine, surely the best song on the album, effectively reached straight into our chests and grabbed at our then isolated hearts, Richard Butler reassuring and demanding compliance at the same time.

Roll on to 2022 and the Furs are finally here, with the tour that they’ve had to reschedule umpteen times due to Covid. The Royal Albert Hall is disappointingly not as full as it should be, presumably due to the lost dates, and the arena section is all-seated, guarded by strict security tasked with keeping enthusiastic fans back from the stage, but as the band weave their magic and the audience energy grows, these things become irrelevant and barely noticeable.

From the minute he strides onto the stage, Richard Butler holds us in the palm of his hand, with his passionate articulation of his clever lyrics with emphatic gestures and expressions and constant connection with the audience.  It’s really difficult not to watch only him. Dragging our eyes away, with him tonight are Tim Butler (bass), Rich Good (guitar), Amanda Kramer (keyboard), Mars Williams (sax) and Zack Alford (drums), plus original guitarist Roger ‘Dog’ Morris is back for some of the older tracks, with roadie guitar tech Denis also making an appearance. 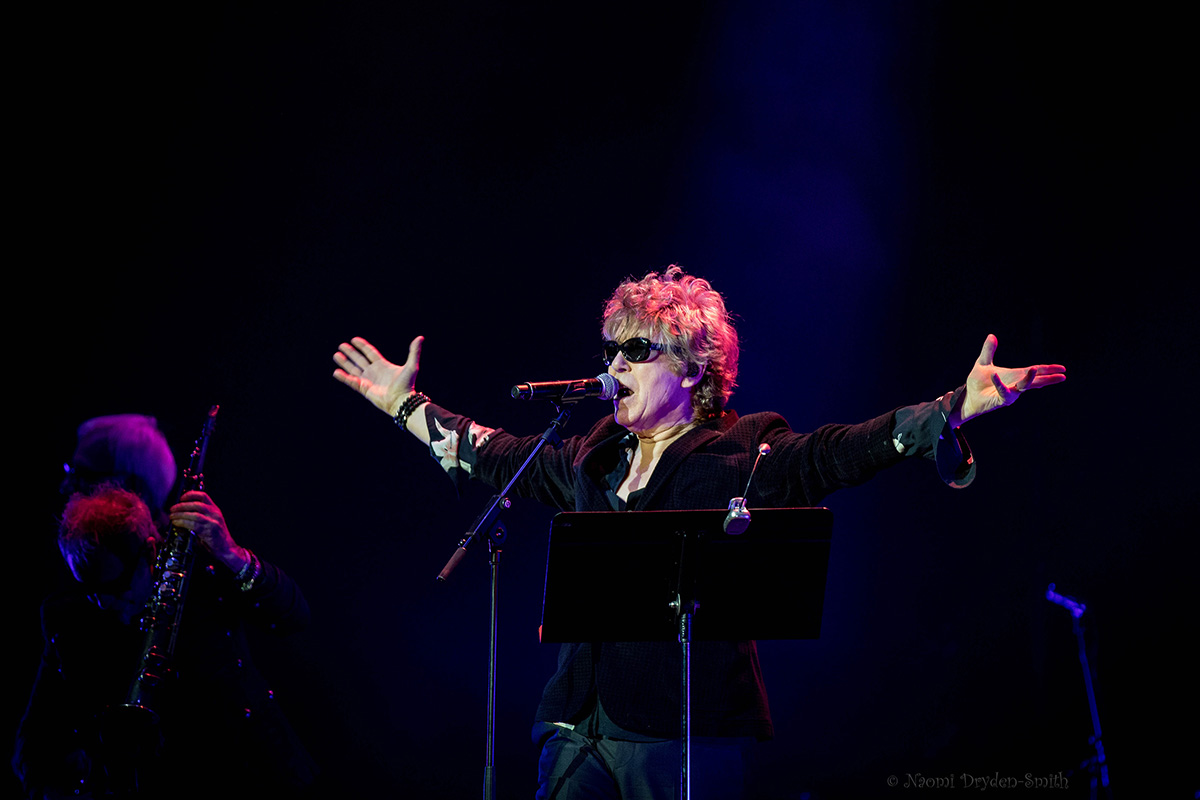 The setlist’s a fairly even spread across the breadth of their 40+ year career, with many essentials starting with the sardonic Highwire Days, then the jarring and discordant Dumb Waiters, the gloriously romantic Ghost In You, and Love My Way, a tribute to people struggling with their sexuality, which again is just as relevant now. And, obviously and necessarily Pretty In Pink – the song that makes us want to shred up bits of pink lace and satin and make terrible prom dresses.  Original guitarist Roger ‘Dog’ Morris makes an appearance for some of these.

Interspersed are the new tracks: You’ll Be Mine fills the Hall with a wall of sound and it’s at this point that I first notice the drummer isn’t Paul Garisto.  Zack Alford from the States more than proves himself worthy of his Bowie/Springsteen/B52s pedigree, he’s like an octopus back there, driving us forward with impossible beats.   He again comes to the fore in Don’t Believe, reminiscent of the way The Cure’s Jason Cooper handles Burn: all eyes on him.

Ash Wednesday is one of a couple of songs (Wrong Train also) that sees Richard Butler moving softly into the vacuum left by David Bowie, his voice hypnotic and gently lulling us.  Amanda Kramer chimes in with gentle harmony – she’s an understated but crucial presence as always. Richard happens to be singing about the catastrophic end of a relationship, “…love lies murdered…”, and even if our relationship hasn’t just broken up we are still heartbroken.  And Richard is there to comfort us. At this point, this incredible song in this incredible venue, he could be singing about sandwich wrapping and we’d still be spellbound.

The forceful isolation of No One, with Tim Butler’s driving bass resonating off the Hall’s acoustic mushrooms (they really are called that), pushing the devastating point home, is stunning.  Rich Good’s guitar chimes in, there’s a thin shard of light across the gloom and we’re holding on for dear life.

This Will Never Be Like Love gives Mars Williams one of several opportunities to show off his extraordinary saxophone skills, although amazingly he tops even this in the encore in both Sister Europe, even upstaging the outrageous gyrating and pouting of Richard Butler, and somehow generating a ridiculously high note that has everyone gasping in India.

India is a genius and logical end to this incredible set – following Sister Europe, both taking us beyond the Hall’s curfew and back to the very beginning of this band’s journey. They’re spilling into the plush aisles, the security guards have given up, everyone’s on their feet, even in the corporate seats, and none of us want this perfect night in this amazing venue to end.

We dance upon the carpet floor
And reel around 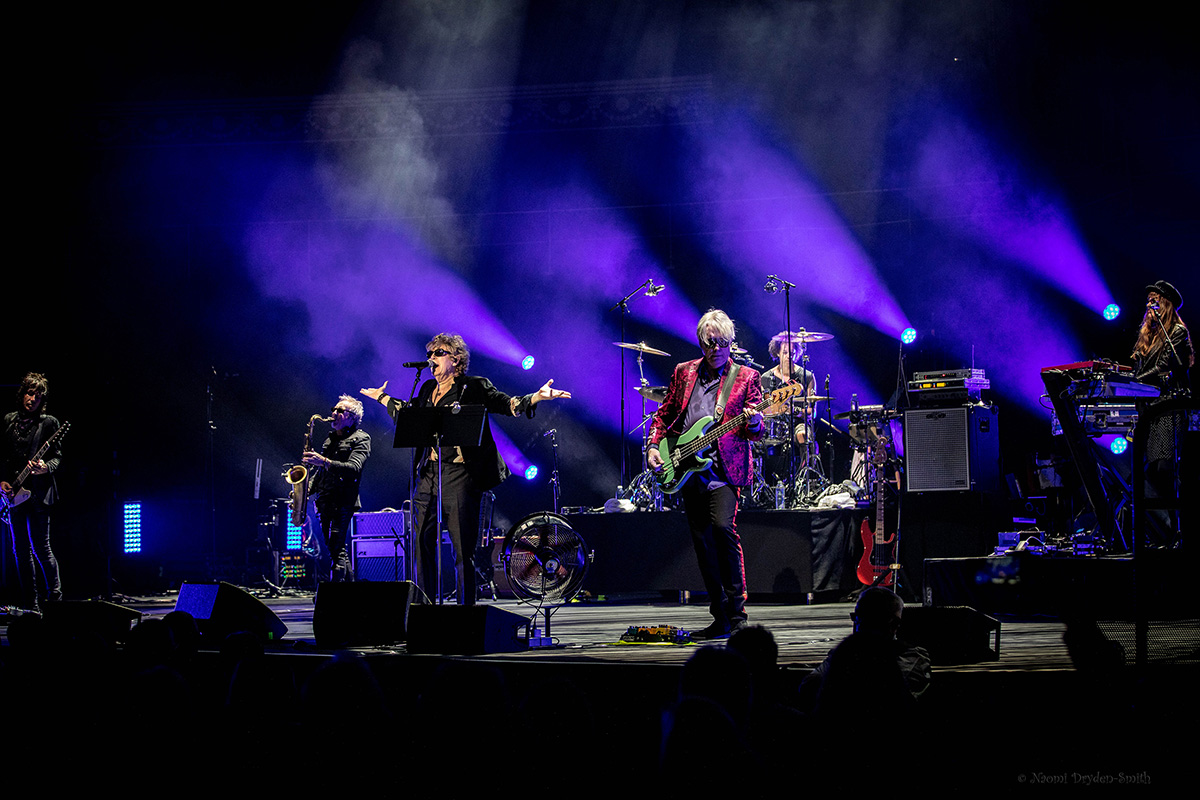