Louder Than War’s Roxy Gillespie takes in the plethora of talent taking the stage at The Psych Weekender 2018. 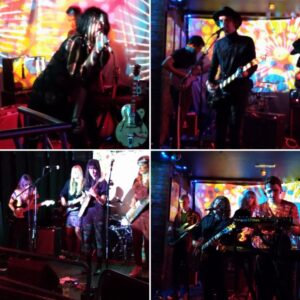 Run by stalwarts of the psychedelic music scene Astral Elevator, The Psych Weekender at Night People looked set to be a truly enjoyable experience. With over 40 bands across 2 stages, the event promised no clashes. Not being able to see everything you want is a major drawback at a lot of events, so this was a plus in itself. The venue was pretty full from the beginning and the audience were buzzing with expectancy, which was hardly surprising. The line-up was strong and had something for everyone, with both British and international bands filling the packed schedule. The only thing missing was Melt Dunes, an outstanding band, who had van trouble en route. Black Cat Revue sadly couldn’t make it either.

Urf started the proceedings in the smaller room with their atmospheric songs, featuring hypnotic keys and occasionally fierce vocals. The mood became upbeat and full of gusto with the instrumentals from Los Bitchos. With reggae and Latin vibes, the performance was excellent; the musicianship superb.

Control of the Going brought back the mellow feel to the small stage. Obvious crowd favourites, they gave the audience great 60s psych influenced songs with folk styled vocals. The 60s feel continued on the main stage with The Big Peach, although this was more 60s psych pop. The whole feel-good set was a pleasure to watch with some of the band dressed to match the retro feel of the music.

Mayflower Madame from Oslo were the men in black with serious hats. With styling so heavily defined, the music has something to live up to. Luckily, that was no problem, and the band hit the stage with some dark 60s rock, full of screaming guitars; a serious onslaught of sound. Another band showing how strong the line-up was.

The atmosphere at Night People continued to show the real love the crowd had for the genre and live music in general. It is always great to be at an event where the audience are so up for the music and willing to give their support from the beginning of the event.

The merchandise stall was overflowing with great items to take away ranging from the straightforward vinyl, CDs, tapes and T-shirts to the whimsical – false moustaches, Brighton Pier ride tickets and Tarot cards courtesy of Thee Lucifer Sams, a band on the Sunday line-up.

The Psych Weekender also had the stunning visuals from Inner Strings, giving added atmosphere and a great backdrop for the music.

Getting back to the music, things took an ambient turn with the spaced-out sounds of One Unique Signal performing a mesmerising body of sound. Continuing the laid back feel, Pete Bassman made the most of his drum machine backing tracks and feedback loops to produce a mystical, trance filled set. Ambience at its best.

Strange Cages couldn’t have been more different with their strident, alternative sound. The keyboards were something special and the tortured vocals bounced over the music like an imp let loose on the stage. The wildness continued with a devilish set from Bones Shake. The lead singer growled his vocal over some truly amazing rhythm and blues, featuring superb slide guitar. But it was really all about the vocalist who sounded like Jim Morrison (if he had been brought up by wolves). Completely awesome in the truest sense of the word. The performance seemed more like a case of possession by the spirit of rock and roll with lyrics that were dangerous and raw. One of the best; a hell of a performance.

The festival continued with more angst from Weird Sex, with their psych-punk and meaty rhythms, before the mood turned back to a dream state with the majestic set from Is Bliss. With guitars sometimes reminiscent of The Durutti Column, the music and echoing vocals soared, beautifully relaxed, then forceful and almost bombastic; another fine performance. The softer air continued with Spacers. The vocals took centre stage here; high and atmospheric. The music was non-the-less fine, with great keyboard input and a slight slacker feel. You Said Strange were another fine 60s influenced band, spaced-out and echoing there was an eerie beauty to their sound, like a half-remembered dream you try to grasp but can’t hold on to.

More dream-like sounds from Black Doldrums. Both the music and vocals echoed through the set, spiralling and ethereal compositions held together by the drummer. The set had another-worldly, immersive feel.

Chicos De Nazca gave the receptive Psych Weekender crowd mellow, 60s rock with moody psych guitars; lively and sultry at the same time. With slightly fuzzed vocals and sad, intense Latin undertones the crowd lapped the performance up. The band gave an animated performance and the crowd bayed for more at the end of the set. A real winner.

Black Market Karma had a full sound with great keyboards. The dual vocalists gave a different tinge to the music, which was sometimes clear and heavenly and sometimes darker and more moody. The use of samples and the buoyant guitars elevated this set to a higher plane. The prog-psych from this truly together band was exceptional.

The evening continued with the pure bred freaky psych of The Oscillation; an exquisite set. Lumerians were similarly impressive; true masters of the genre. Live proceedings finished with Throw Down Bones. They brought their own unique sound to the stage, Mysterious and beguiling sounds to finish a brilliant day. The fantastic vibe continued with a DJ set from Ola’s Kool Kitchen. All in all, day one provided all you could ask from this very cool little urban festival. 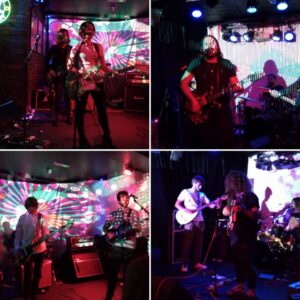 The day started with some ballsy rock from the appropriately named Guts. With a charismatic singer releasing growling animalistic vocals and plenty of rolling around the stage, the garage-psych the band produced was a great way to start day 2 of The Psych Weekender.

The second stage kicked off with Thee Lucifer Sams and some spellbinding psych using repetitive rhythms to tether the music and create an absorbing mesmeric experience. Occasionally sinister, this was a true psych experience. The Goa Express had a more guitar-led sound and some deceptively sweet vocals. To cap it off, they had pure 60s keyboards that were a pleasure to hear. More indie-alternative than psych, they played a superior set that was a real crowd pleaser. Another band who veered towards the alternative genre were Muertos. Their female/male joint vocals were exceptional and the sometimes pared-down music accentuated their vocal abilities. When the music got louder, the quality remained and the Spanish/ Mexican feel to some of the music was terrific.

Black Delta Movement go from strength to strength. The set had their trademark tight rhythms, fantastic garage-psych and crystal clear vocals; always a memorable experience. They continue to be one of the best bands on the scene and are currently gaining the attention they deserve. The band pulled out all the stops and gave the audience at The Psych Weekender a real treat; exhilarating and awe-inspiring. Garage-psych doesn’t get any stronger than this. Local favourites Deja Vega were next in the second room. Playing to the faithful and those who had come from further afield, they had the crowd in their thrall immediately. There is no tighter rhythm section than this. They perfectly underpin the magnificent guitars and fierce vocals, giving space for the free expression they do so well. Despite slight technical difficulties towards the end of the set, the crowd loved it. A visceral and electrifying performance.

Bloodjoy had two stellar performances to follow but they did it with aplomb. With their tribal Native-American rhythms and moody guitars setting the scene for some wild shouted vocals, this made for a unique performance. Hiding under their hoods, the band produced music that pulsed with its own energy. Tajak were a very different proposition. Their music had a much less defined feel, with lots of experimentation with sound and a transcendental feel. This moved from repeated guitar phrases through the whole gamut of sound and felt very close to the spirit and freedom of psych. Using vocal and instrumental distortion, they produced music that was both haunting and beguiling.

The whirlwind that are Sunflowers hit the main stage with a sound that was like a mixture of The Cramps and Sepultura. It was a great, heavy garage rock onslaught with loads of fuzzy guitars and big, hairy bad-man vocals. With plenty of on stage antics, a great sound and massive stage presence, the crowd lapped it up. At the end of the set, the lead guitar was given to the nearest audience member, while the singer/ guitarist used the pedals to produce some serious effects. Entertainment and music of the highest order. Dreamweapon used guitars and electronica to produce music that built to be the sound of a huge, all-encompassing machine. Industrial and brutal at times, there were no soft edges, just the magnificent sound of industrial might. Given that, there was a bizarre intelligence to that machine, an underlying sentience; Powerful and absorbing.

Echoing, crashing guitars and vocals enhanced by samples came next from The Jabberwocky Band. This was psych as most people would categorise it, sinister dreamscapes of noise, bombastic guitars and meaty drums. At times there were crescendos of sound; music building drama. Interestingly tribal at times, there were whoops and whirls from the vocalist, overlaying the shimmering psych; quite a set.

Unfortunately, the review ends here. The night however, did not with more excellent music to come from 10 000 Russos, The Janitors, Gioia, Mugstar, Holy Wave and The Black Tapes. Go to the Astral Elevator page here to check them out.

The whole weekend was a triumph. The atmosphere was everything you want from a festival – friendly, relaxed and full of people just loving the music. And what stunning music there was. This was a great little urban gem of an event. Hats off to Leanne from Astral Elevator for providing amazing entertainment and running a tight schedule with aplomb. Well worth a visit.