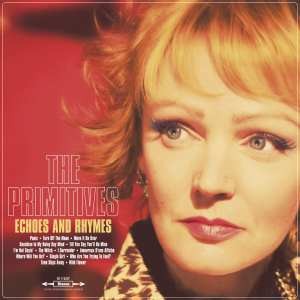 The Primitives were formed in Coventry in mid-1985 by Kieron (vocals), Paul Court (guitar), Steve Dullaghan (bass), and Pete Tweedie (drums); after a few gigs Kieron was replaced by Tracy Tracy (vocals), a diminutive peroxide-blonde whose presence introduced a more melodic approach yet remained true the eh bands buzz saw signature, which earned the group the inevitable and lazy comparisons to Blondie.

They self released their debut single ”ËœThru the Flowers’ (Lazy Records) label in 1986 which was rapidly followed by BBC sessions for Janice Long, Andy Kershaw, and John Peel. The wonderful ”ËœReally Stupid’ came next, followed by ”ËœStop Killing Me’ appearing in early 1987 ”â€œ by now The Primitives were riding a critical wave though chart success evaded them; enter RCA who picked the band up in late 87′ and releasing their first full length album ”ËœLovely in 1988, at the same time the RCA promotional clout was enough to propel the near perfect single ”ËœCrash’ into the UK Top 10.

The band had also undergone some personnel changes; Tweedie was thrown out for allegedly mistreating Tracy’s cats!! Having completed their first US tour Dullaghan departed; he was replaced by Paul Sampson and the band recorded the follow up to ”ËœLovely’ the poorly received ”ËœPure’ ”â€œ Things went from bad to worse when the bands third album the Ian Broudie produced ”ËœGalore’ fared even worse; shortly after it was all over bar the bickering over the money!!

Fast forward to 2011, and the tragic death of Steve Dullaghan which brought the various members of the band back together primarily for the funeral; a rapid realisation that time had indeed healed previous wounds and the band began discussing making music together once more. The first seed of this activity was the 2011 ”ËœChristmas 45′ which brings us neatly to summer 2012 and the arrival of ”ËœEchoes And Rhymes’ on Spanish based Elefant Records; it’s fair to say that it is a surprising release ”â€œ primarily as it’s an album of cover versions, though all tracks revisited are songs by very obscure female fronted groups from the 60’s ”â€œ arguably the era that fully understood the benefit of a decent melody, and that was something that certainly in their prime The Primitives were also fond of.

I’ve had this album for a few weeks now; it’s an exhilarating, start to finish head spinning joy!!

Reparata & The Delrons ”ËœPanic’ opens the album, the track stems from a 1968 B-side from the group who later achieved fame as the backing vocalists on the Rolling Stones ”ËœHonky Tonk Woman’ The Primitives remain faithful to the slightly hard edge of the original but subtly add their own C86 style jangle to great effect which leads us neatly to ”ËœTurn Off The Moon’ which stems from Stanley Kubrick’s notorious and arguably paedophilic film ”ËœLolita’ ”â€œ Tracey pitches her voice with just enough husky sensuality to continue the long running ethical debate. ”ËœMove It On Over’ is a pacey garage type number with a warm soulful vocal which was written by the fantastically named LeGrand Mellon in 1965 which leads into ”ËœSunshine On My Rainy Day’ initially written by Polly Niles and is a slower keyboard driven semi psychedelic number that allows Tracy to demonstrate her surprisingly strong vocal range.
”ËœI’m Not Sayin’ sees Paul Court take lead vocal ”â€œ this is just like the Jesus & Mary Chain circa ”ËœHoney’s Dead’ without the feedback. Possibly the most instant track on the album ”ËœI Surrender’ a stomping 2min 30 sec cover of on Bonnie St Claire’s Tamla styled floor filler. The equally excitable ”ËœAmoureux D’une Affiche’ stands out as its sung in French, apparently Tracy is bilingual though her second language is Spanish ”â€œ doesn’t seem to cause her any issues as she repeats the ”Ëœla la la la la’ vocal hook through the track which deals with a man’s love for a semi naked poster girl.
The only track that rocks the albums concept is ”ËœSingle Girl’ and it only does that as Sandy Posey scored a bona fide hit with in 1967, a tale of a girl looking for love; though clearly she has a darker side as she coos “I need a night time love, to get me through the day”Â.
”ËœWild Flower’ closes proceedings with a ramped up garage stomper that Court once more assumes vocal duties for ”â€œ this is pure black and white 60’s, the backing track to every Austin Powers party ”â€œ glorious!

This album is complete in every sense of the word; The Primitives have retained the integrity of the source material and then added their own identity with such refinement you would be forgiven for thinking this was a new album as oppossed to a covers album. There isn’t a single track that doesn’t work, despite the kaleidoscope of styles, pop-punk, psych garage fuzz, a touch of Northern Soul, even encroachment into folks periphery ”â€œ this is perfect pop, the sort of pop that leaves you variously grinning, singing and jumping… all at once!!