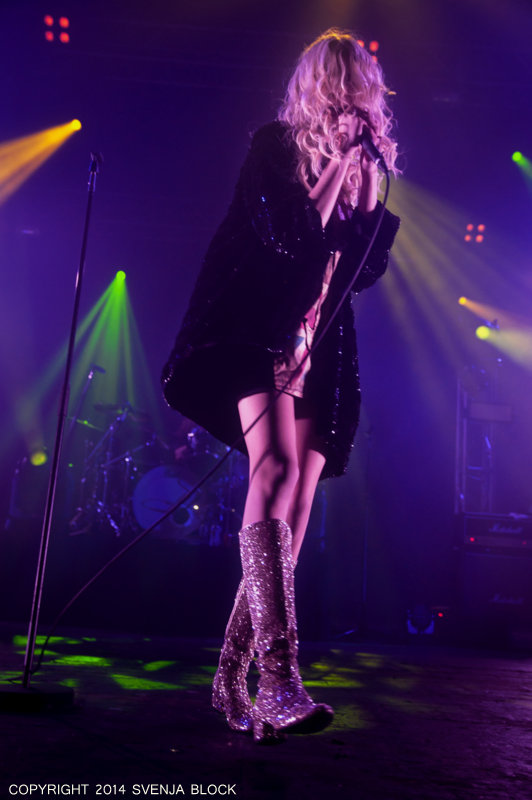 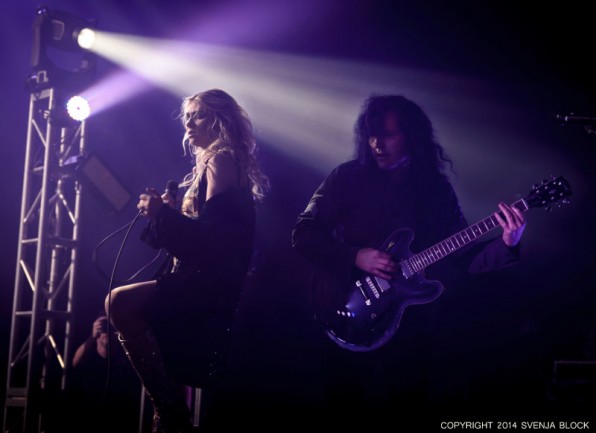 The Pretty Reckless | Nothing More

Taylor Momsen’s The Pretty Reckless released their latest album ‘Going To Hell’ earlier this year to a mass of critical acclaim. Touring said album they reached London last week where Louder Than War’s Sophie Sparham and Svenja Block were bedded down amongst the faithful and witnessed them prove beyond any question of doubt that they’re a “completely unstoppable force”.

‘Put your cameras down, this is live fucking rock ‘n’roll,’ Taylor Momsem cries out to her adoring audience, who are currently piling down the front to try and grab a glimpse of the lead singer through the crowd. The room is a sea of sweaty bodies, jumping, dancing and raising their arms to the beat; it’s mad to think that it’s only been six years since The Pretty Reckless formed and yet here they are playing a packed out show of their last U.K. tour date … and they’re not leaving without a bang.

The first band on tonight’s fabulous line up is the brilliant ‘Nothing More’. The four piece alternative rockers raise the bar from the word go, with their no holds barred, high energy performance. The audience watch intensely, they use all the stage, whilst playing their instruments with true craft. Jonny Hawkins’ melodic vocals fits together perfectly with the rhythmic sound of the guitar, as he sings effortlessly over the catchy music.

Tonight they do more than just play, they shock, as they strap a guitar up to a spinning stand, centre stage, and solo off it! Yes, you heard me right. The band finally finish with an explosive ending, performing their track ‘Salem’, which includes a mad drumming session and the audience scream ‘Burn the Witch’. These guys are definitely one to watch next year.

Next up is the popular Heaven’s Basement and tonight, as always, they don’t disappoint. ‘How’re you folk feeling tonight?’ yells Aaron Buchanan, before launching into their hectic set.  Like ‘The Pretty Reckless’ there’s something about this band that just screams pure rock ‘n’ roll; it might be because of the gritty vocals, the epic guitar solos or the fact that these guys just simply know how to jam. The band play an ace set including the tunes, ‘Fire Fire’, ‘Can’t Let Go’ and finish on the powerful ‘Nothing Left To Lose’. 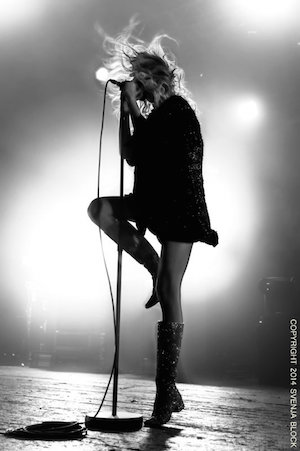 As a black curtain is lowered, fans know it’ll soon be time for the main event. Soon the legends step out onto the stage, accompanied by strange organism noises, before breaking into the brilliant ‘Follow Me Down’. Amongst the faded lights, everything about this moment is perfect; the bluesy riffs and stomping beat fits together flawlessly with the powerful female vocals.

Taylor Momsem’s hair falls before her face as she sings passionately down the mic, she has this audience eating out of the palm of her hand and both parties absolutely love it. Tonight the singer wears a union jack dress with bright silver boots, obviously embracing her last night in the U.K.

It’s clear that The Pretty Reckless are bringing classic rock and roll to a new generation as they blast through brilliant tunes such as ‘Sweet Things’, ‘Miss Nothing’ and the stylish ‘Why’d You Bring A Shot Gun to the Party?’; which causes everyone to clap along in the break down. One thing that no one can dispute is how immaculate their stage presence is.  Every piece of the puzzle fits together perfectly, as the band appear to play with complete ease.

After a great line up of tunes, it’s time to simmer things down with the beautiful ‘House on a Hill’. The moment feels extremely intimate as the crowd sway and Momsem sings softly down the mic, putting all her emotion behind this moving song. It’s not long before the band play their massive hit ‘Heaven Knows’ and the crowd go insane… we’ve not even got to the encore yet.

After a short break and a hell of a lot of chanting, The Pretty Mess return to finish with one of their biggest hits, ‘Fucked Up World’. The band give it their all, even treating the audience to an amazing drum solo by the talented Perkins half way through the song. It’s clear that combined together, Taylor Momsen, Ben Phillips, Mark Damon and Jamie Perkins are a completely unstoppable force. Come back to the U.K soon please.

All photos in the photo gallery below are © Svenja Block who currently has a brilliant photo-journal / book about Barb Wire Dolls out which you can find a review of here and can see some photos from here.