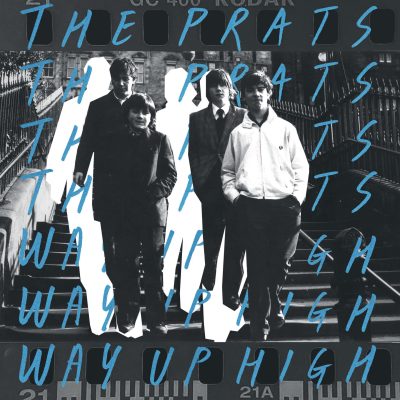 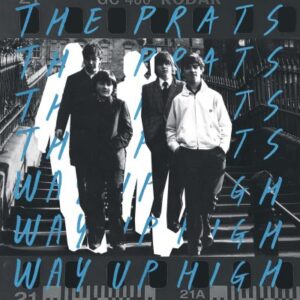 The Prats – Prats Way Up High

A new album by Cult Edinburgh band The Prats compiles their recorded output from 1979-81 alongside a previously unreleased Peel Session on slime green vinyl. Nathan Brown claims they are archetypal of the 1979-81 post-punk era which saw the first shoots of goth and death rock. FFO John Peel and lo-fi post punk.

Prats Way Up High is the first time The Prats have had an album release on vinyl. Given the cut off date of 1981 this is most definitely a nostalgia trip, but it is not their first. In 2005 Now That’s What I Call Prats Music on One Little Indian (same label, more culturally sensitive name) featured their three singles, compilation tracks and demos on a CD. What is new to the world on this 12 inch slab of slime coloured vinyl is a previously unavailable John Peel session from 1979.

The over-riding comment I would make is that this is music of its time. It has what I would call a classic 1979/80 sound. I hear elements reminiscent of bands like The Shapes, Crisis, the first Fallout single. The bass leading the melody, the unassuming vocals, the scratchy guitar. This is more post-punk than punk per se (don’t let’s go down the “What is punk?” rabbit hole) and displays essence of the development of what would become the goth sound. In 1979 it might well have been called New Wave but that’s a label it seems no-one is keen to return to (I blame D.O.A). This is definitely a “Peelie sound”. Many of the independent label bands who John Peel played had some similarity with what The Prats offer up.

The budgetary limitations of a bunch of teenagers are evident in the lo-fi sonics. It reminds me a great deal of The Apostles who made a complete recording career out of opting for 4 track portastudios over professional studios with proper engineers! In our tech rich present, it is easy to forget the constraints in terms of the price of equipment, recording techniques and even the limitations of equipment afforable for independent recording studios. The beauty of punk was you could pick up a cheap Woolworths guitar, learn 3 chords from a Fanzine and start creating. While this may prove a stumbling block for some listeners, it is part of the allure for others. Some young bands now go out of their way to recreate the sparse sounds of analogue recording on cheap equipment from this period.

This album mixes up the timeline a little, kicking off with the 4 track 1990’s Pop EP released on Rough Trade in 1980. The hilarious track Disco Pope is available as a single and was clearly popular, making its way onto the Rough Trade compilation CD ‘Post Punk Volume 1’ in 2003. It’s a great little early punk/post-punk tune. Garagey guitar and a chuggy, chunky bass. Staccato drums punctuating a catchy chorus that sounds instantly familiar and leaves you with mental images of the Pontiff busting moves on the dancefloor. It is easy to forget how scandalously blasphemous a song like this was in pre-Father Ted times. The meandering bass and twinkling guitar weave in and out of each other most noticeably on TV Set and Nobody Noticed. This is an early example of what would become an indie template that Half Man Half Biscuit went on to make their own. Nobody Noticed, about the death of a young woman named Tanya, is suitably grim and reveals a sombre underbelly to the band.

In the same year the Die Todten Ryeten Schnell 7″ came out on on German label Da Da Records. The 2 tracks are akin to Crisis in the guitar work and bass sound. Assuming the A side is just any old phrase in German you’d be missing a trick. A line from one of the great gothic horror stories, this comment was whispered by one of Jonathan Harker’s travelling companions in Dracula, translating roughly as “For the Dead travel fast”. The title of B-side Jesus Had A PA, shows a healthy disdane for religion from a group of kids from a Catholic school.

In 1981 The Prats released another single on Rough Trade, General Davis. This track sees the band move into proto-goth territory complete with flanger infused guitar. It’s arguably an early example of what would become known as Death Rock when practiced by bands like Part1. Part macabre, part anti-war, anti-authoritarian message it warns that those like Davis who don’t question orders may end “with a bullet inside his head”. This song was used in opening credits and publicity for Hollywood movie The Manchurian Candidate in 2004. That rekindled an interest in The Prats. Imagine if you’d told a 12 year old from Edinburgh that they would end up with a song on a Hollywood film? I like to think this is a great example of the possibilities to smash accepted restrictions that punk unleashed.

Bizarrely the 2 songs from the General Davis single are split between the end of side 1 and start of side 2 on this compilation album. The nerd in me would want them on the same side! Over on side 2 The Alliance has a rhythmic and angular sound I’d associate with post-punk bands such as Gang of Four but with a creaking, squeaking, screeching guitar laid over the top.

The next 2 songs are taken from the Fast EP Earcom 1 compilation 12 inch. The Prat’s 1979 debut on vinyl, it was the result of a quickly dispatched demo tape to Fast Product. This legendary Edinburgh indie label gave us Gang of Four and the Mekons. Not to mention the UK release of Dead Kennedys’ California Uber Alles! The tracks are somewhat lumpy and lo-fi but this is no surprise when you discover their drumkit was made of cardboard!

2 more demo tracks are perhaps the best recordings. Two Views on Life features an earworm bass line.  Walking Dead brings in acoustic guitar, and is very similar in style (again) to the Apostles. The bass line underpins a jolly melody which juxtaposes with bleak lyrics.  “We dont want action we want apathy instead we’ll be good to our masters until we’re old and we’re dead. ”

It’s a surprise the John Peel Session from 1979 has remained under wraps until now as he was something of a fan. One Little Independent even have a quote from the man himself: “One of the best sessions we’ve had for years”. Only 2 of the 8 songs feature elsewhere on this album. Despite recording for the BBC, the lo-fi characteristic remains, and the vocals sound very nervous. They wouldn’t sound out of place on Crass’s Bullshit Detector albums. It’s a shame Peel’s intros haven’t been included.  Excitable or droll, they would have been interesting in equal measure and given this well deserved context. Perhaps no-one recorded them.

Achieving something of “cult status” in their native Edinburgh, The Prats are the subject of a documentary Poxy Pop Groups – The Story of The Prats due out later this year.

On the early songs, including the Peel session you can hear their youth: they were 12-14 years old when they started out in 1977. The inner sleeve provides full details of who played on which track (although not which track was on which release) and a slew of press cuttings and photos. To find out more about The Prats while you listen to them, it is worth checking out the comprehensive and informative The Prats website.

The band have dedicated Prats Way Up High to the memory of bassist Jeff Maguire, who passed away in July of this year after a lengthy battle with cancer. A nice tribute.

Available for pre-order from One Little Independent.

Words by Nathan Brown. More of Nathan’s writing can be found over at his Louder Than War Author Archive.