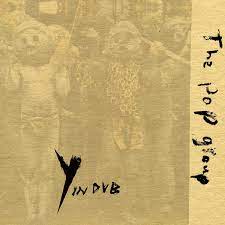 The Pop Group: Y In Dub

Seminal post-punk album Y gets remixed by its original producer Dennis Bovell. Can you improve on perfection? Simon Tucker finds out.

In his 2019 review of the “definitive edition” of The Pop Group’s celebrated debut album Y, Louder Than War’s Tim Cooper said it was “unlike anything you’ve heard before. Or even since” and as always Tim was right. Y was birthed in that petri dish explosion of post-punk where the shackles were thrown off and influences absorbed from far and wide. Y was seeped in Beefheart, Coltrane and Lee Scratch Perry. There was nothing linear about it. Y fired off in a myriad of different directions making it a confusing, invigorating and challenging listen. Y is an album that educates and terrifies in equal measure and a major part of that was the production by legend Dennis Bovell. Bovell was keen to show more of his production skills outside of the world of reggae and lovers rock and he would go on to produce classics by The Slits, Thompson Twins, Orange Juice and Madness. Inspired by Bovell’s reworking of their music at the “Salon Y” event which celebrated 40yrs of Y, The Pop Group approached him and asked him to put his spin on the album they recorded together all those years ago. So this is Y In Dub where the original tracklisting is given the “Dennis Bovell Dub Version” treatment and in what an incredible album it is.

From the opening remix of Thief of Fire you are instantly put at ease with any worries about what tampering with the original source material would do put straight to bed as Bovell’s treatment of the music places you square in the centre of the room. Each instrument has been separated out so for once the term “immersive” can be used without fear of accusations of pomposity. The instrumentation on Y In Dub highlighted in such a way that you can tune your ears into one of them without others cluttering up any mental space. You can follow the rapid-fire drum patterns on Snowgirl, or you can zone in on the classic riff of We Are Time right the way through from start to finish with each new song offering you numerous pathways to follow down the rabbit hole.

One of the most important elements to The Pop Groups sound and appeal is the words and vocals of lead singer Mark Stewart. No one sings like Mark. His voice is instantly identifiable regardless if it is screaming or whispering and with Y In Dub, Dennis Bovell has manged to make these vocals even more effective with Stewart feeling like he is constantly right next to your shoulder. You are his audience and his message will…be…heard.

The biggest surprise of Y In Dub is that it surprises you. You would think that hearing the original for the first time could not be topped but with his reworking, Bovell has managed to make a beautifully strange and odd album stranger and odder. Y In Dub is so very unsettling and abstract with the separation and splintering echoes of the instrumentation adding to a feeling of delicious queasiness which taps perfectly into the current climate. You could get dizzy if you are not careful listening to this album…and there’s not many albums you can say that about.

With Y In Dub, Dennis Bovell has taken a sacred text and reawakened the demons within it. He has created a new language with old words and has answered the question of can you improve on perfection because here Bovell has proven that yes indeed you can.