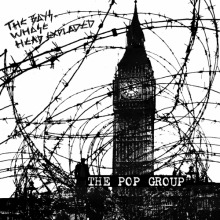 The Pop Group – The Boys Whose Head Exploded

I have a confession. I am ashamed to say that I am relatively new to the revelation that is The Pop Group. I have since familiarized myself with their classic debut ‘y’ and ‘For How Much Longer Do We Tolerate Mass Murder?’, but never really got to fully appreciate their impact and legacy until they reformed in 2010 and started playing their reunion gigs. I am suitably embarrassed.

Proclaimed as pioneers of the late 70s early 80s post punk period and pre-dating and influencing the likes of PIL and Gang of Four, The Pop Group have to some (uninformed!) degree, found themselves at the bottom of the ‘important and influential’ pile which, when you listen to their back catalogue, is pretty incredulous. How did this happen? However, since reforming, the band released ’Citizen Zombie’ in 2015 to great acclaim and continue to play live sporadically so maybe second time around?

Anyway, present day and their label Freaks R Us continue to release, not only new stuff from the band, but also archival stuff from their considerable live back catalogue. On 27th May 2016, they release ‘The Boys Whose Head Exploded’. Compiled from unearthed basement tapes recorded during their incendiary performances of late 1979 and 1980, the compilation also includes a bonus DVD featuring film footage shot by legendary director Don Letts. The accompanying film footage is a short feature that’s been hiding in Don Letts’ punk rock archives for the past 35 years. It was filmed by Letts at Alexandra Palace on June 15th 1980 at an all day festival that featured the likes of John Cooper Clarke, The Raincoats and The Slits. What a line up! The rare footage encapsulates the band’s frenzied mix of punk, funk, free jazz and radical politics at its rawest.

According to the press release, the bulk of the salvaged live recordings comprise brawling versions of songs taken from the band’s recently reissued second studio album For How Much Longer Do We Tolerate Mass Murder? The collection also features the previously unreleased ’73 Shadow Street’ and a surprise mutation of the Glaxo Babies’ ‘Shake The Foundation’. All of the ten tracks were captured in 1980 with six of them recorded in a gig in Cologne, two in Milan, one in Sheffield and one in Helsinki

The LP kicks off with ‘We are all prostitutes’ and immediately you get the feeling this must have been one hell of a chaotic sweaty gig. Discordant guitars and squealing sax summoning the best of Beefheart. But it is the funkiness that grabs you by the throat. This maybe noisy, but boy is it danceable. And the funk continues with ‘Justice’. The vocals are quite low and the quality isn’t brilliant, but Mark Stewarts’ venomous vocals still come across with a ferocity that runs throughout this whole LP. You can almost feel the spittle hitting you.

‘Blind Faith’ is fast and again very funky with its spasmodic squealing brass. ‘Forces of oppression’ and ‘Rob a bank’ are noisy, chaotic and are very abrasive. I can see why The Birthday Party were influenced by The Pop Group as they both share the discord, the chaos and the complete disregard for time signatures or tempo. Scratch Acid surely must be fans too?

Finally we get ’73 Shadow Street’ which is minimalist, harrowing and pretty hard going. And I don’t mean this in a bad way. It finalises the LP with a slow, dirgy track and a complete contrast to the first track.

What you get with The Pop Group is unflinching anger, bottled rage, vicious lyricism and a unbridled urge to get the listener educated and informed whilst having a bloody good boogie while you are at it. Un-apologetically political and socially aware, The Pop Group’s output may not be easy listening to some ears, and if you are after pretty, traditionally structured and beautifully sung songs then forget it. But, they are completely original, more relevant than ever before and hopefully have a lot more new (and old!) stuff in the archives to share. This may be The Pop Group ‘Live’, but it isn’t to be brushed aside. It stands alone as an important historic piece of music and contributes to the legacy that is the 70s and 80s angry punk/post punk sound with lyricism that is (sadly) needed once again in 2016.

The Boys Whose Head Exploded will be released through Freaks R Us on Friday 27th May 2016.

The vinyl edition comes as a picture disc with a download code to access the film and hi-res audio content. The CD edition includes a DVD of the 1980 footage and a 12 page poster.