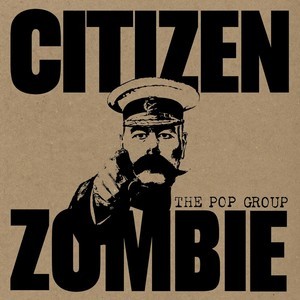 Much has been said about the new album from The Pop Group and the incredibly well publicised Citizen Zombie. Their first album in thirty-five years since 1980s We Are Time will finally see the light of day. Probably unknown by a generation, they have become influential with their unique brand of punk meets jazz meets funk, and for some may only be known for a We Are All Prostitutes (their debut single with Rough Trade) t-shirt being worn in an episode of the TV series Ashes To Ashes.

With all the hype of such a record comes the inevitable dissections and appraisals, and the comforting thing for The Pop Group should be that they have created a fantastic monster. Good grief, Citizen Zombie is good!

For anyone not hearing The Pop Group before you’ll have never have witnessed anything like it. Perhaps hints at its style will have been found in the past work of leader Mark Stewart whose superb releases for On U-sound (check out Jerusalem – genius) and his unbelievably brilliant Politics Of Envy and Exorcism Of Envy albums continue to enthral and amaze.

Opening with the title track the album can be no-one else. Trademark strained vocals and screams, throbbing bass, manic percussion and screeching guitars power through one of the most incredible starts to an album you will ever hear. “You’ve got that brainwashed look of an alien abductee”. Bring it on

New single Mad Truth sees the band delve into a funk-punk and despite its predictable rawness, brings one hell of a catchy tune. How fabulous it wold be to see this roar up the charts! Female backing vocals help to reduce the edge and its one hell of a toe-tapper. Absolutely incredible stuff.

Re-visiting the punk spirit, The Pop Group show the kids of today how it’s done. No inhibitions, no rules, no-one telling them what to do or how to do it, they have pulled off one of the finest albums for many a year. Under the fine production of Paul Epworth, a fan of the group himself, they have carved and lovingly crafted a mini-masterpiece.

Through the subtleness of Nowhere Girl to the bass funk of S.O.P.H.I.A. to the chaos of Box 9 they challenge everything that has ever gone before, chew it up and spit it all back again. “Have the created a monster?” – damn right they have.

The restraint of Nations where three minutes of wonderful speech are performed over a continuous synth backing provides an interlude before quite literally into St. Outrageous. Off-key notes? Possibly, but who gives an airborne intercourse? Stewart certainly doesn’t.

Closing with Echelon, a piano led militarian theme is as close as The Pop Group will get to beautiful and as close to a perfect ending album you will this side of Bristol. Have they made a classic? Probably.

Now can we have Citizen Dub please?

The Pop Group head off out on tour in May taking in these shows: