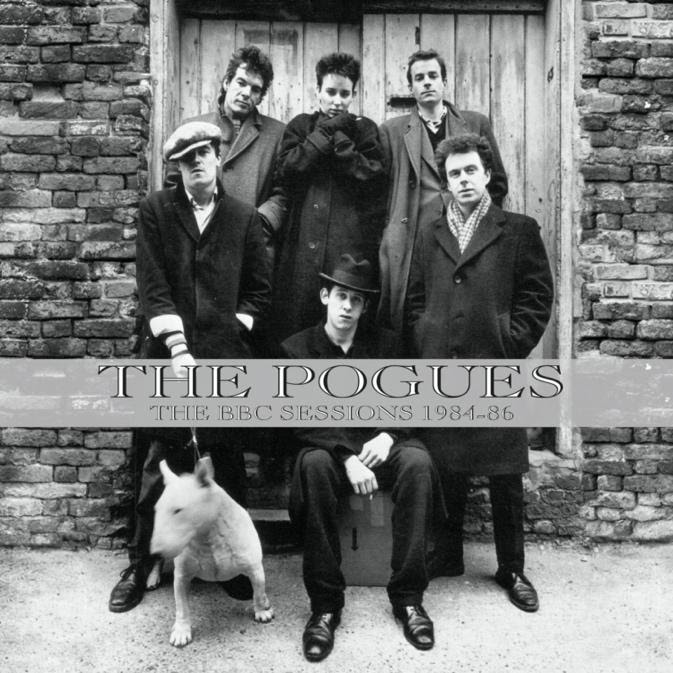 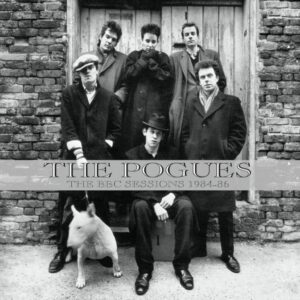 A new collection of familiar tunes recorded at Maida Vale over a 2 year period for the BBC showcases the raw essence of the Pogues, capturing them at key stages of their development says Nathan Brown.

In all, 13 of the 23 recordings on this expanded CD/download album were previously unreleased apart from their initial airing. True, a vinyl version BBC Sessions album hit the shops for Record Store Day back in August but 2 of The Pogues’ visits to Maida Vale in this crucial period (7 extra songs) weren’t included on the vinyl release.

Few would disagree that The Pogues are responsible for the worldwide phenomenon of Celtic Punk. While others have influenced and developed the sound it’s a case of No Pogues, No Celtic Punk – it’s that simple. These recordings capture the Pogues at just the right time to chart the band through the initial rowdiness of the Red Roses For Me period in the first 2 sessions, through the development of a more intricate sound that would appear on Rum Sodomy and the Lash and finally the beginnings of the transition into the powerhouse that would record If I Should Fall From Grace with God. As an aside, it’s notable that the 2 John Peel Sessions were produced by Mark Radcliffe, who went on to perform in his own Pogues inspired folk rock band The Family Mahone.

The first 2 sessions – one for John Peel (April 84) and another for Kid Jensen (July 84) – reveal the raw clay from which the pounding beast that is Red Roses For Me would be formed. There’s always a slight edge to live sessions like these and while the songs are broadly the same there is enough difference in the sound and the mix for a Pogues fan to sit up and notice. Flourishes on the tin whistle, accordion or banjo may differ. In line with BBC requirements, Boys from the County Hell had one “fucking” and one “fuck” dropped but “miserable bollocks and a bitch’s bastard’s whore” survived the cut. Your brain does the job of reinserting the F word so it is hardly noticeable.

On the second session the banjo is way more prevalent, the drums perhaps not pounding quite as loudly. The room acoustics accentuate the live performance and gives an almost ghostly feel. There are moments such as Poor Paddy On The Railway and Boys From The County Hell when the banjo has the timbre of 1960s Dubliners recordings. The shoutalong crew vocals give this recording the feel of a rowdy session in the pub, but the music is all tight as you like. While “Frigging entrails” were fine for John Peel, for Kid Jensen’s session a second delivery of Boys From The Country Hell mumbled “migging entrails”. Connemara Let’s Go – which would undergo a name change to Down in The Ground Where The Dead Men Go by the time Red Roses For Me came out in October 1984 – provides a suitably chaotic ending to this chapter.

By December 1984, the Pogues were back with 4 more songs for John Peel, an opportunity for a dry run in a studio before recording Rum Sodomy and the Lash. Whiskey You’re The Devil, which featured as a B-side to A Pair of Brown Eyes 4 months later, straddles the earlier sound with the emerging complexity. Navigator and the traditional lament Danny Boy both have a suitably melancholy sound with the extra reverb. Meanwhile Sally Maclennane gives a preview of a perennial crowd pleaser.

The March 1985 session for Phil Kennedy’s show revealed A Pair of Brown Eyes mere weeks before the single release, accompanied by Muirshin Durkin which would feature on the 12″. It still sends a shiver down my spine. On this session it is noticeable that they had further refined their sound. A return to the greatest little boozer and to Sally Maclennane appears somewhat softer and restrained when compared to the version on Rum Sodomy and the Lash and the mix has accentuated the intricate instrumentation.

4 months later and the first of 2 sessions for Janice Long provides another 4 tunes from the Pogues second album which would hit the streets the following month. Consequently they are more faithful to the familiar songs, but still with a slightly different focus. A more folksy version of Billy’s Bones with a fiddle taking centre stage sees Shane MacGowan almost struggling to get the vast mouthfuls of words out. The Old Main Drag has a bright fairground wurlitzer feel to it – less sombre than the brilliantly dark album version.

While he doesn’t get a mention on the cover, I’m sure Terry Woods was in the ranks of the Pogues by the time of the final session in November 1986, and Cait O’Riordan had been replaced by Darryl Hunt. An early, more sedate, incarnation of If I Should Fall From Grace with God is similar to the version they recorded for the Straight To Hell soundtrack, likewise Rake At The Gates of Hell. The melody of the latter would be later partially recycled by Shane McGowan and The Popes as Aisling. With its clip clopping drums, Lullaby of London captures a glorious performance on the accordion which whisks you back to the traditional roots of this music. Turkish Song of the Damned is thumping and slower than the album recording with a more prevalent mandolin/bazouki but the tempo provides space for more venom in the vocal delivery. These 4 tunes mark the second stage of maturation of the band towards the epic sound of their third album.

All in all this is a collection of some timeless classics, studio quality but with the variety inherent in live performances. At times more complex, at others stripped back, providing a peek at the raw essence that made The Pogues of this era such a big deal. It’s raucous. It’s fun.  It’s emotional. Don’t ask me to pick a favourite, just play them all. And if you don’t like this band, Pogue Mahone!

All words by Nathan Brown. You can read more from Nathan on his Louder Than War archive over here.​