Home Music Bands The Plainviews: Different Ways of Saying Nothing At All – EP Review 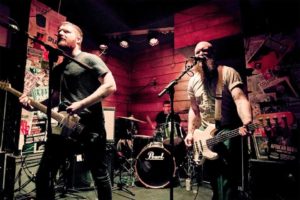 A Million Different Ways of Saying Nothing At All

Louder than War’s Ioan Humphreys has a listen to the absolutely brilliant debut EP from The Plainviews.

The Plainviews are a three piece band featuring members of IDLES (Adam ‘Dev’ Devonshire and Jon Beavis) and The St Pierre Snake Invasion (Damien Sayell). I could probably stop right here and go straight to the end of my review as both of these bands absolutely kick arse and have been mainstays of the indie underground for the last few years. They offer quality, quantity and CVs that just can’t be forged. According to the band, the group was formed “through friendship, some form of functional alcoholism, and a proclivity for the inane”. The band have already gained recognition in Bristol for their acerbic and visceral ‘alt-rock’ songs about nothing. That’ll do for me.

To celebrate the upcoming EP, the band have released an accompanying video for lead single Bladerunner, illustrated and directed by the wonderfully talented Tommy Norm. The band say: “Here’s the video for our first single, Bladerunner, all because we thought it would be funny to make an animated video for a song with one line.” Brilliant.

EP opener Shirley Bassey is stop start with screamo vocals and a fast as fuck riff with loud ride cymbal heavy percussion. Shared vocals and a crescendo finish bring this to a sudden halt to this 1.19 blink and it’s gone, proceedings. The aforementioned Bladerunner has bombastic drums and a swampy, throaty bass running throughout. On top there is a piercing guitar noise layered on top. There is start and stop here with both the piercing guitar noise and the measured repetition of the lyric “go and get the gun” which screaming vocals and an almost crooner delivery.

The killer riff of Hips  is bolstered by the bass and the drums. The vocals come in and talk about “according to legend, she had hips like the devil” (!!) Stop start noise and an almost psychobilly delivery, with the continued refrain of “according to legend….”. An absolutely mental  track that defies the standard verse, chorus, verse structure and works absolutely fucking brilliantly.

Charlie Delta has an insanely fast bass riff that soon morphs/degenerates into screaming vocals, spiky atonal guitar, and a song structure that is seemingly put together on a ‘Fuzzy felts board’. Quick and dirty. Oh, and yeah absolutely essential. Final track James Brown is a throbbing bass driven track with the immediate vocals of Sayell singing the refrain of “you’ll never stand a chance (X3), you’ll never get away”. More guitar breaks and non linear freakouts, guitar noise and big riffage. What comes from this breakdown of riffs and (lack thereof) of structure is the song’s ability to traverse several ‘traditional’ song genres, whilst keeping an immense intensity and a give absolutely no fucks attitude.

The Plainviews come with a pedigree and background that is steeped in hardcore, noise, rhythm, punk, dissonance, discord, fun and love, and they perfectly traverse that tightrope of absolute earnestness and humour. An ‘offshoot’ they may be, but The Plainviews are not to be taken lightly. Download the EP now and catch them live when you can. They are seriously good.

A Million Different Ways of Saying Nothing At All is out now via Bristol DIY label Invisible Llama Music. Pre-order the EP here.

The Plainviews can be found on their Facebook, Soundcloud and their label.