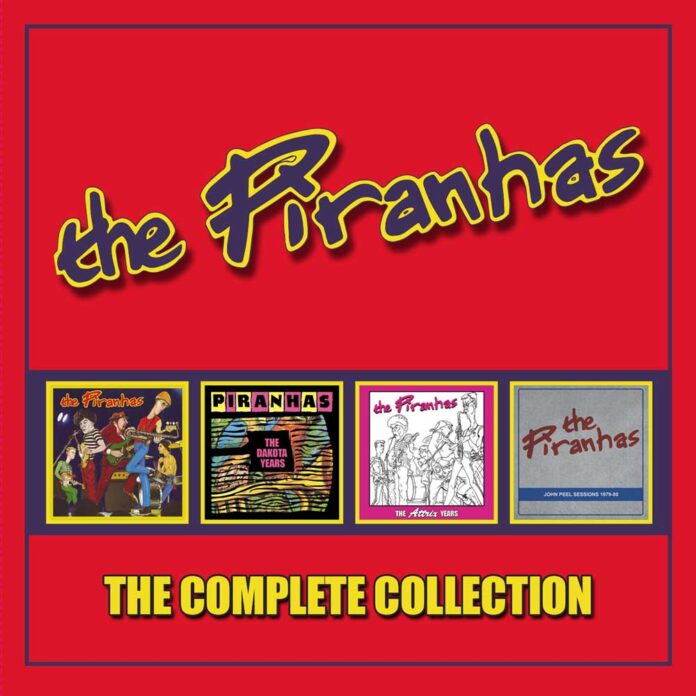 The Piranhas – The Complete Collection 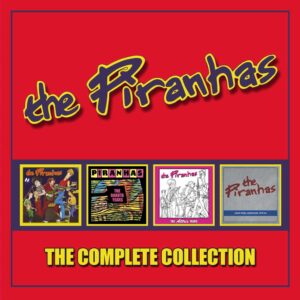 4CD set including most everything that pioneering Brighton new wave band The Piranhas set on tape during the late 1970s and 1980s. The self-titled 1980 debut album included the smash Tom Hark and is released here on CD for the first time. There are also separate discs thrown over to their early Attrix cuts, later Dakota recordings which include their 1982 hit Zambesi and sessions for the John Peel Show. Ian Canty harks back to the old days at London by the sea…

The Piranhas will always be associated with their 1980 top ten single Tom Hark, but years before that success they were also a huge part of Brighton punk and new wave from its inception. They were ubiquitous on the town’s alternative music scene based in The Vault, a crypt beneath an old church that was pressed into service by punk bands to use for both rehearsals and gigs. The Piranhas were formed in 1977 by “Boring” Bob Grover and John Helmer, both on vocals and guitar, drummer Richard Adland aka Dick Slexia and bass player Reg Hornsbury. They later added Zoot Alors (possibly not his real name) on saxophone.

Beginning to build a local following after a Jubilee gig with fellow locals Wrist Action at The Vault and in 1978 they cut three tracks which featured on the influential Vaultage 78 compilation issued by Brighton-based label Attrix Records. As they now had established themselves as a fixture in Brighton and provided some of the highlights of the aforementioned comp, they were invited to record their own single for Attrix, Jilly/Coloured Music, which came out in early 1979.

The Piranhas cut a second Attrix 45 Yap Yap Yap/Happy Families in 1980 and recorded an album with the intention of also releasing it on the same label. In between there was a short, unsuccessful dalliance with Virgin Records which yielded the Space Invaders/Cheap And Nasty single in 1979, but the band were then signed up to major label Sire, the home at the time of The Undertones. The Attrix LP was subsequently scrapped as a result and The Piranhas almost immediately scored a big hit on their new imprint with a rewritten cover of Elias and His Zig-Zag Jive Flutes’ tune Tom Hark, which reached number six in the UK charts. They quickly recut the Attrix songs to make up a debut album that followed soon after.

The first disc of The Complete Collection has that Piranhas debut album from 1980, released here for the first time on CD. With the exception of Tom Hark, all of the rest of the material was first taped for the projected but ultimately unreleased LP on Atrrix. It appears from the sleeve note that the Sire versions were cut in a bit of a rush to latch onto the success of the hit single. Even taking that into consideration, I found this a pretty enjoyable record at the time and listening again in 2021 it seems to have retained much of its charm.

Starting off with probably my personal favourite number by the band, Getting Beaten Up, probably helped. This song represents the kind of thing that The Piranhas did so well, perfectly stating one of the many pitfalls of growing up in the UK of late 1970s. They conjure up situations that just ring true. On this album they season their punky new wave with a large measure of ska, which had been thrust to the forefront of the music scene via Two Tone. They even smuggle in the odd bit of funk too. The sad, sweeping pop of Saxophone shows that they weren’t just jolly japsters having fun, and the upbeat Tension manages to weld together both comic and serious strands ably.

A tense ska anti-war rave up Green Don’t Suit Me hits the spot, and I Don’t Want My Body was selected as the follow up single and promptly disappeared without a trace. That wasn’t entirely fair as it was another good peep into the downbeat, self-effacing Piranha world. The tune is here twice in album form and as a bonus in its single mix, which weirdly seems to have a glam drumbeat added. Although there are perhaps a couple of the middling numbers which, though adequate, don’t add much to the whole, The Piranhas was a perfectly good debut collection and unlucky to rise higher than the number 69 spot on the UK LP listings. The album is boosted here by bonuses of b sides and single tracks. Of these, Boyfriend is a great example of the band’s witty and easy-going take on life, and the Space Invaders single is a riffy bit of upbeat fun.

We then move on to the band’s later recordings on the Dakota label. By the end of 1981, the original version of the band split with the township jive of the Vi Gela Gela single, which starts off the third disc here subtitled The Dakota Years, their last release. There is a percussive and exotic 12″ version of the song present here as well. They recorded these tracks at the famous Pathway Studios in London. Even though the record didn’t make an impact, its sound hinted at a bright fresh start for The Piranhas, a world away from their punky beginnings at The Vault.

Five tunes from the same Pathway Studio demo sessions are included as bonus tracks at the end of this disc. Of these, Bone Idle recasts the band’s original attitude into a hip hop rap context with fair results and Fallen Hero skanks along nicely with a big brass sound. A smart and sarky Smiling finishes this disc in a fairly danceable fashion. Two further extracts from the same source, the light ska of Bouffant Blue and Pink Elephants that were both much more in The Piranhas’ style of old, were used as the flipside to the Zambesi 45.

Grover, by now the only original member, put together a new version of the band. This aggregation were rewarded with another top twenty hit single in Zambesi, which successfully married the high life sound of Vi Gela Gela to Bob Grover’s typically grounded lyrical viewpoint. On the reverse of later editions of Zambesi were the dour electropop of Who Needs You and a queasy shuffle of Darabukkas, which sounded like something Peter Gabriel might has done in the early 80s. Next on this disc is the very commercial Boring Bob Grover single Easy Come, Easy Go, which was squarely aimed towards the Zambesi sound, but failed to emulate its success. The Piranhas’ name had already passed into history by this point, but over the years there have been semi-reformations like Piranhas 3CD and Bob still leads a line up today.

Third disc The Attrix Years takes us back to the start. It features The Piranhas’ cuts for the Vaultage 78 album I Don’t Want My Body, Tension and Virginity, plus both sides of the band’s two singles for the label. The bulk of the songs here were readied for the Attrix LP release that eventually didn’t come to fruition. Most of this material was released in 2004 on Tom Hark – The Piranhas Collection and for me this selection captures the band early in their development very well. There is just that extra vitality and no feeling that commercial pressures were dictating things, which you couldn’t really say about the Sire recordings.

Of their earliest recordings, Tension and Virginity do sound a bit basic sonically – they’re endowed with a great energy and have the type of keen observation that was a trade mark of The Piranhas, as does I Don’t Want My Body, which for me works much better in its early form. Jilly was a small, perfectly formed and very memorable debut single, and Yap Yap Yap marked their progress as a sharp new wave act ready for the pop charts. The projected Attrix album is perfectly good and for me has the edge on Sire LP, with simply a touch more energy and freshness. Coffee is rendered in a tenser fashion, which improves the overall effect and the no frills approach also benefits the superior versions of Pleasure, Do You?, Getting Beaten Up and Saxophone.

There are four tracks that feature at the end of this disc which did not make the Tom Hark collection. Of these a version of Love Game was taken from the compilation Rock Against Racism – R.A.R’s Greatest Hits LP. The echoing supercharged r&b of Feel Queer When You Ain’t Here and garage rock number Things Could Be Worse both first cropped up on The Attrix Tapes various artists cassette. Ending this section is the previously unreleased thudding lo-fi of Shut Up, which isn’t that far from Wire’s Lowdown in structure, and was part of The Piranhas’ first venture into demo recording.

Finally we have the three John Peel Sessions The Piranhas recorded in 1979/80. Like most items taped for Peel, these are clear, simple recordings that rival the officially released takes. The first set of four from February 1979 has a great version of Coloured Music, and this song could have been written yesterday about the recent craze for vinyl. Jilly shines again like the perfect punk pop with grit that it is, and there is a studio-run out for Cheap And Nasty, which also saved Peel reading out band introductions.

They were back in July of the same year with another quartet of offerings. Four of the band’s best loved numbers crop up, with Boyfriend and Getting Beaten Up given sharp and zesty readings. The remainder is made up with early takes of the two sides of the Yap, Yap, Yap/Happy Families single. A third and final session took place in late January 1980. Anything, otherwise known as Do You? (Solo Sex For Two), is a jumping funky reggae item that begins things well enough. The material isn’t quite as strong this time around, though Something impresses with a previously unheard dash of 1960s pop sike revealing itself. Strangely that assists it in not sounding not particularly dated in the present day. Ending with a terse Green Don’t Suit Me, this disc arguably displays The Piranhas at the very peak of their powers.

Something that helps this boxset enormously is the sleeve note from Brighton local Phil Byford, which provide a good deal of insight and tells the story of The Piranhas very well. This really enhances the package as a whole and deserves praise. I’m not going to pretend that The Piranhas were a great band, but they were a good one and very entertaining as a live act, something that should not be undervalued. They provided a lot of fun plus a number of extremely catchy songs, which were cut with keen insight into the mishaps one might encounter during teenage life at the time. It helped greatly that they carried it off with a good serving of their own scrappy and highly individual charm. Without wanting to sound condescending, The Piranhas had the “common touch” in their songwriting, which suited their down-at-heel stance and image to a tee. The Complete Collection is a thoroughly merited and very listenable overview.