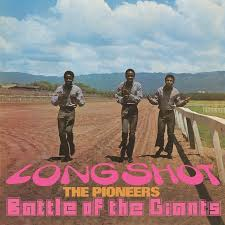 The Pioneers: Long Shot/Battle Of The Giants

New release featuring two of the most popular albums of the Skinhead Reggae period by The Pioneers, including their UK hit single Long Shot Kick De Bucket (covered by the Specials among others)…LTW’s Ian Canty hears the best of the trio’s recordings with Leslie Kong behind the studio deck…….

Though originally coming together in the early 60s, The Pioneers’ line-up that recorded these two albums only materialised just before their big breakthrough. The Crooks siblings Sydney and Derrick had got together with pal Winston Hewitt in the original version of the Pioneers and this aggregation recorded several Jamaican hits for Joe Gibbs. When Derrick and Winston had been replaced come 1968 by Desmond Dekker’s half brother George Agard and songwriter Jackie Robinson, the group switched to Leslie Kong’s Beverley imprint (already home to Agard’s brother and his glorious run of success).

With the ‘classic’ version of the band in place they hit the UK charts with Long Shot Kick De Bucket, which stopped just short of the UK Top Twenty in 1969. This record became a firm favourite with the skinhead youngsters that had embraced Reggae music in the late 60s and the accompanying album which makes up the first segment of this reissue was also highly valued by the short-haired fans.

The Pioneers prospered under Kong’s tutelage and Long Shot the album was everything you could wish from a Skinhead (or Boss) Reggae LP. It was even originally issued at the cost of just under a pound, making it within even a pretty skint Boot Boy’s range. This low price however ruled it out of chart action, but the record was a big seller and a fondly remembered waxing. It still sounds good today, age having not withered it at all.

Long Shot captures The Pioneers at the height of their powers, their vocal back-and-forth welded to that driving beat, caught right when it was most fresh. Hugely enjoyable and entirely self-penned too, obviously the title track catches the eye (or more accurately, the ear), but there’s plenty more to this LP.

Poor Rameses may follow the formula of Long Shot, but it’s an enjoyable diversion and Long Up Your Mouth benefits from a wonderfully bouncy bass line and triple vocal attack. Bring Him Come has some lovely organ touches and soulful vocal and Boss Festival throws some Gospel-style singing into a rough Reggae mix. There’s barely a duff track here, with single Samfie Man (perhaps a jibe at former producer Gibbs) another winner with a real groove and Mother Ritty (the flipside to Samfie Man when released as a single) a tad slower with a nice, delicately picked out melody. A very satisfying LP on the whole.

By the time of Battle Of The Giants, The Pioneers were spending a great deal of their time in the UK, but always went back to Jamaica to record. Even so, some adornments were added on top of the rawer JA mixes before they were presented to British audiences, as happened to a great deal of Reggae recordings as the boom of ’69 cooled down. As 1970 went on hits had started to be harder to get, so in a nutshell the beat was softened for Pop/commercial purposes. There was some amendment to the UK issues and Battle Of The Giants was affected by this, but listening to it now I didn’t find the add-ons overbearing in any real way.

Basically this is another strong set by The Pioneers, though they were moving in a Soul direction which they would pursue more heartily as the years went on. Another mix of previously released single material (in fact Samfie Man featured on both albums) and newer tracks cut for the album, Battle Of The Giants didn’t bother the charts, but this was a classy enough offering with some strong songs. The two covers, Slip Away and the ballad Consider Me (original recorded by Eddie “Knock On Wood” Floyd, here a vocal showcase for Jackie Robinson) show how well the band could handle that different Soul style, but they also score with speedy Gorgeous And Marvellous and a charming Reggae love song in Now You Are Gone. The title track is excellent, a storming piece of Skinhead Reggae at this right up there with their best.

In addition to the two platters we get seven bonus tracks too. It’s great to hear the Rocksteady version of Easy Come Easy Go (the Reggae reading of the song is also among the extras), it has a lovely, lazy sounding and exotic feel. Cha La La, I Need You again shows the Pioneers Soul inclinations to good effect and Pee Pee Cluck Cluck belies the silly title, a nice guitar crash here and there assisting another solid Boss Reggae outing.

This new twofer is a great way to find the prime of the Pioneers in one big hit. At the time of recordings they were one of the biggest acts both at home in Jamaica and also with the ex-pats domiciled in the UK and the new fans, the skinheads who treasured the Long Shot album as a key demonstration of the potency of Reggae. A nice sleeve-note gives a good band history with some rare photos, you can’t go wrong with this reissue. The Pioneers were one of the top bands of the Skinhead/Boss Reggae era and here is the proof.