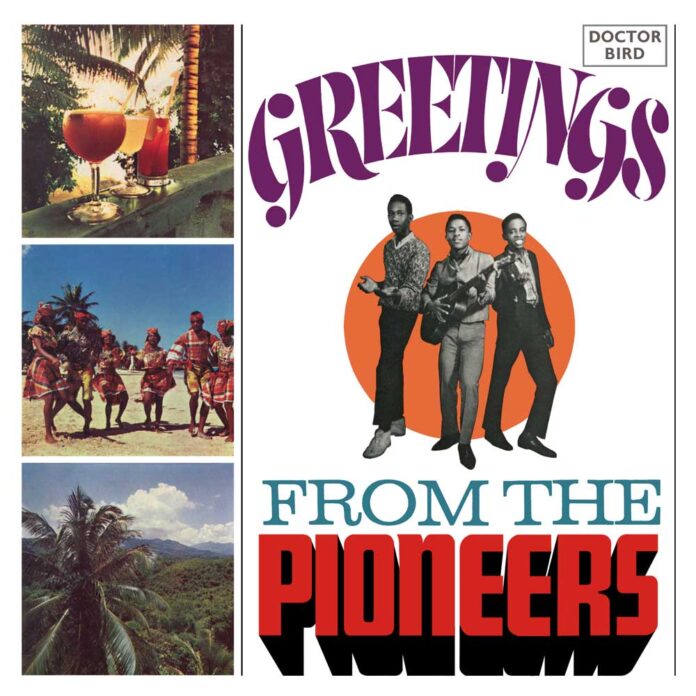 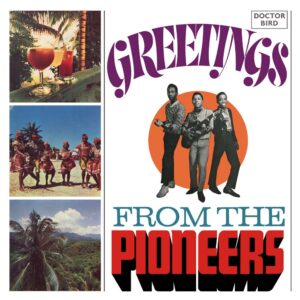 Reissue of The Pioneers’ 1968 debut album recorded for Joe Gibbs and originally issued on his Amalgamated Records imprint. This 2CD set also includes various other sides the Sydney Crooks-led vocal trio recorded for Gibbs and a second selection from the producer’s rocksteady era archives. Ian Canty, after being suitably greeted, meets The Pioneers…

The Pioneers had originally come together in the early days of ska, with the Crooks brothers Sydney and Derrick joined by Winston Hewitt. They put out a number of singles during 1965 and 1966, but none of them manage to make it big in Jamaica. Because of this lack of impact the band’s activities were understandably scaled down, with Hewitt leaving the group and the island itself for a new life in Canada. Derrick launched new outfit The Slickers with his brother and Sydney Crooks also diversified into concert promotion too. By 1967 however he was looking to launch a solo career as part of Joe Gibbs’ new production stable.

The song chosen for his first single was Give Me A Little Loving. But on trying the number out, a second voice was required to make it really work. Crooks ducked outside the studio and asked the first person he set eyes on if he could sing. Luckily the fellow he chose could and was called Jackie Robinson. He perfectly voiced the session and suitably enthused, Crooks reignited The Pioneers with him, at first as a duo.

Desmond Dekker’s brother Georges Agard joined later on, taking the band up to their “classic” aggregation, but for the most part of their early singles with Gibbs The Pioneers were just Sydney and Jackie. The pair and Gibbs amounted to a winning combination for his new Amalgamated label, but even so, the band soon became unhappy with the financial arrangements and moved over to Leslie Kong’s organisation. That was not before providing the imprint with a surfeit of Jamaican hit singles, most which are included here.

In 1968, just as rocksteady was beginning to mutate into reggae, a number of those single sides were collected on long player by Trojan. The Greetings From The Pioneers album still rings out as a blast of pure good times over 50 years on from its initial release. It may appear slightly strange that it includes a couple of tracks by Winston Jarrett’s outfit The Righteous Flames (that were erroneously credited to The Pioneers), when there were plenty of true Pioneers waxings in Gibbs’ archive to choose from. For some reason this was a practice that was sometimes used to fill out the LPs of the Kingston music scene of the time. Fortunately enough both Flames tunes are very good, with Baby Don’t Be Late being a fine effort and their inclusion does not detract much from the collection as a whole.

But of course the main focus are The Pioneers themselves and their own contributions are high class rocksteady outings of the first order. Commencing with the sweetly-voice mid-tempo charmer Me Naw Go A Believe and the classic rocksteady sound You’ll Never Get Away, the band are in their element here. Excellent efforts like the brassy and attractive Shake It Up and their first horse-themed song No Dope Me Pony keep coming.

The wobbly guitar groove of Things Just Got To Change is dancefloor gold, Sweet Dreams has the instantly recognisable Gibson’s All Stars sound, and the suggestive Tickle Me For Days is imbued with a touch of humour that was part of the band’s charm. Though Jackpot was memorably covered by The Beat a decade later, the original still is the best and the album is completed by Give Me A Little Loving, that initial Crooks-Robinson combination, complete with very high pitched backing vocal.

Long Shot itself is the first bonus item at the album’s end and it still hits the mark. Of course the topic would be developed further for their breakthrough hit, but it works marvellously as it is. Rudies Are The Greatest aka Goodies Are The Greatest (three years before the trandem riders made their mark) is The Pioneers’ catchy contribution to the rude boy craze. Pan Ya Machete, part of the musically-expressed hostility that went back and forth between Gibbs and Lee Perry, is another good tough dance number, but in contrast it is followed by the delightfully light Miss Eve. Providing an obvious sign that JA music was changing, Reggae Beat re-jigs The Pioneers’ style for the coming sound and the knotty rhythm of Who The Cap Fits is playful and inventive.

The final offering on this disc is Ansel Collins’ Secret Weapon, cut on the driving rhythm of Catch The Beat, The Pioneers’ highly enjoyable hit song that precedes it here. This gives gives Ansel the chance to tinkle the old Joanna very pleasantly for once, eschewing the dominant organ sound of most instrumentals of the time.

The second disc of this set compiles many Gibbs productions from around the same timeframe, with Pioneer Jackie Robinson’s solo efforts showing up. We start out with Errol Dunkley’s good delivery of the slightly old-fashioned sounding song Letter To Mummy And Daddy and later The Mellotones sound similarly youthful on their somewhat better Feel Good. The early DJ toast style El Casino Royale by Lyn Taitt & The Jets is a fine organ/sax thang. Though the sleeve note maligns their other track This is Soul, I personally thought it super, really capturing a party atmosphere. Get On Up by Ossie Henry and Barry Ork aka The Creations, taps into the same groove in similarly pleasing fashion.

The Spanishites, who recorded Woman Of Samaria and seemingly nothing else, remain a mystery to this set’s compilers. Me likewise, after an extensive search only concluded that this track was incorrectly credited to Jackie Robinson on some copies of his excellently performed Over And Over single (also featured, for which it was the b side). A real shame, as the song and performance are both wonderful. It’s basically wall-to-wall “cusp of reggae” stormers all the way through this platter, something that must have satisfied any early need for a moonstomp.

The Blenders’ Decimal Currency is the archetypal reggae organ instrumental with some great bass and Hugh Malcolm’s committed delivery make his Good Time Rock and Mortgage really stand out. Gibbs gets in another pop at Scratch on People Grudgeful, later covered by The Fall and The Immortals, possibly the band who later recorded with Augustus Pablo or possibly not, provide the unusual and exotic Janan. Drumbago & The Blenders add a taste of mento to Reggae Jeggae and Jumpy Jumpy Girl by The Conquerors is full of carefree verve. The set ends with The Cannonball (Carl) Bryan Trio’s sax showcase Man About Town, cut over the Mortgage rhythm.

After leaving Joe Gibbs, The Pioneers tasted deserved international success in the skinhead/boss reggae era with Long Shot’s sequel, Long Shot Kick The Bucket. This classic of the time made the UK top thirty and they scored even higher with Let You Yeah Be Yeah. Their version of the Jimmy Cliff song reached number five in the British pop charts in 1971 and the follow up Give And Take made a reasonable showing too. Their peak-Leslie Kong recordings can be read about here. Since the 1970s, they’ve reformed a couple of times and were still performing recently. But at the time of Greetings From The Pioneers, the band had already hit an early peak, with the false starts of the early 1960s forgotten as Crooks and Robinson, aided by new recruit Agard later, scored hit after hit.

This 2CD also brings together many Joe Gibbs recordings just when he was making his mark. The singing and songwriting skills of The Pioneers were crucial in his impact during the rocksteady years, but he had plenty of strength in depth. Disc 2 highlights these other artists that the producer collaborated with during the time and features many highly enjoyable tunes and a high proportion of hits. All of this combines in what presents as a very enticing package. Rocksteady gracefully morphed into reggae in 1968 and Greetings From The Pioneers catches that point in time pretty much perfectly.