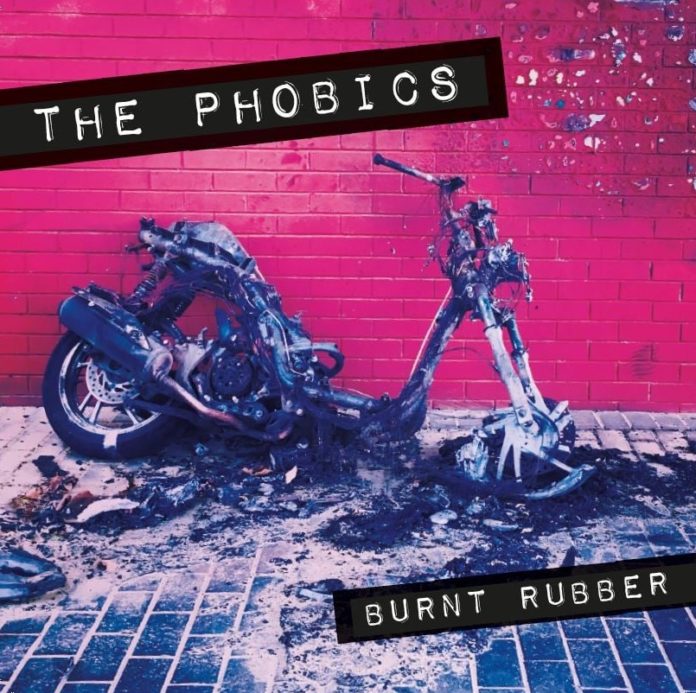 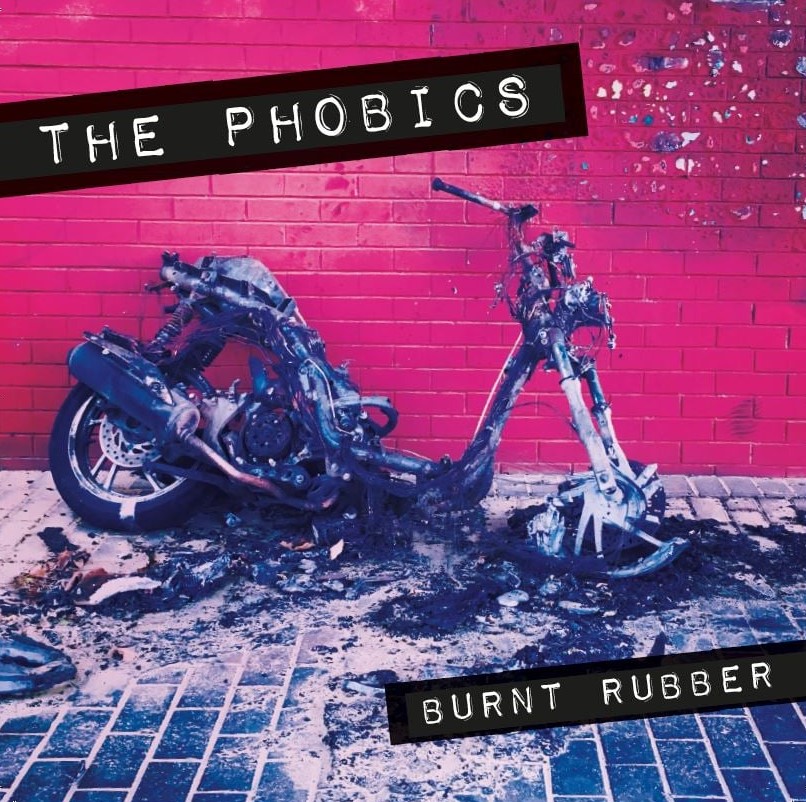 Album Review
The Phobics: Burnt Rubber (Down N Out Records)
CD
Out now
9/10

The Phobics blaze a trail with their latest self-released album, Burnt Rubber, celebrating their 20th anniversary in the process, and Ian Corbridge gets swept along with the ride.

Deptford’s finest punk survivors have always worn their hearts on their sleeves and continue to celebrate the sounds and excesses of the great bands that have influenced so many, yet who have often not realised true commercial success themselves. But it is that stark dismissal of the dull complacency that exists within much of today’s music scene, at least that which seemingly appeals to the masses, that has fuelled The Phobics throughout their life span. And now, 8 years on from their last album, Deptford Calling, we have their latest and possibly finest chapter in the form of Burnt Rubber.

Recorded at Pat Colliers Perry Vale Studios in just two half day sessions in the summer of 2019, this is an album that tells tales of cultural decline, love and loss in equal measures, abuse of power and an underlying despair as to how things have turned out. With a vocal style that reminds me on many occasions of the late lamented Pete Shelley, guitar sounds straight from the school of Johnny Thunders, bass lines that Lemmy would have been proud of and a drumming style that would have been celebrated by Tommy Ramone, this is a beautifully formed collection of proto-punk/ garage rock that takes no prisoners. Whilst their luminaries have all have passed on to that gig on the other side, this bunch of punks are very much alive and kicking very loudly.

The album is bookended by a tale of social loss and decline as Gentrification documents the demise of Denmark Street in London from its former glories. This was always such a pivotal part of London when the whole punk scene exploded in the mid-70s and the loss of the 12 Bar Club was symbolic of this loss. The album opener proves a suitable memorial whilst the closing reprise, Hymn For The 12 Bar Dudes, is also a fitting lament with its solitary piano sounds, as if a distant echo of all the great times of the past.

The fearsome tones of Don’t Lay Your Flowers On My Grave speak about those who slagged off Johnny Thunders throughout his illustrious career and colourful life buts who then became his biggest fans upon his death. Replete with some great guitar breaks this is a very clear snub to those who dance on the memories of those who we have lost. Path Of Love brings a joyous sound from the stable of The Stray Cats and The Cramps to convey the devastating loss of an eternal love.

I Can Tell kicks off with a monster Stooges type intro and brings a whole new energy to the Helltrain song dating back to 1991. More songs of love and loss follow, with big choruses in the finest rock’n’roll tradition, through About The Two Of Us, Get Your Act Together (another old song from the days of the Famous Monsters), She’s A Runaway and Love. Then a salvo of guitars, which owes more than a nod to Alice Cooper, launches Politics which deals with political deception at a frenetic pace.

P-H-O-B-I-C-S is quite clearly the Phobics own re-write of Motorhead’s tribute to the Ramones and in Whatever Comes Our Way we see a far more reflective and bullish narrative to deal with whatever is to come. The title track itself is a Dead Boys style romp focusing on an overwhelming sense of impatience.

Also worth tipping a hat to those behind the desk as the recording is superb, capturing the spirt and energy of the songs and the era from which they were born in a way that perhaps was not available when their peers were at their peak. 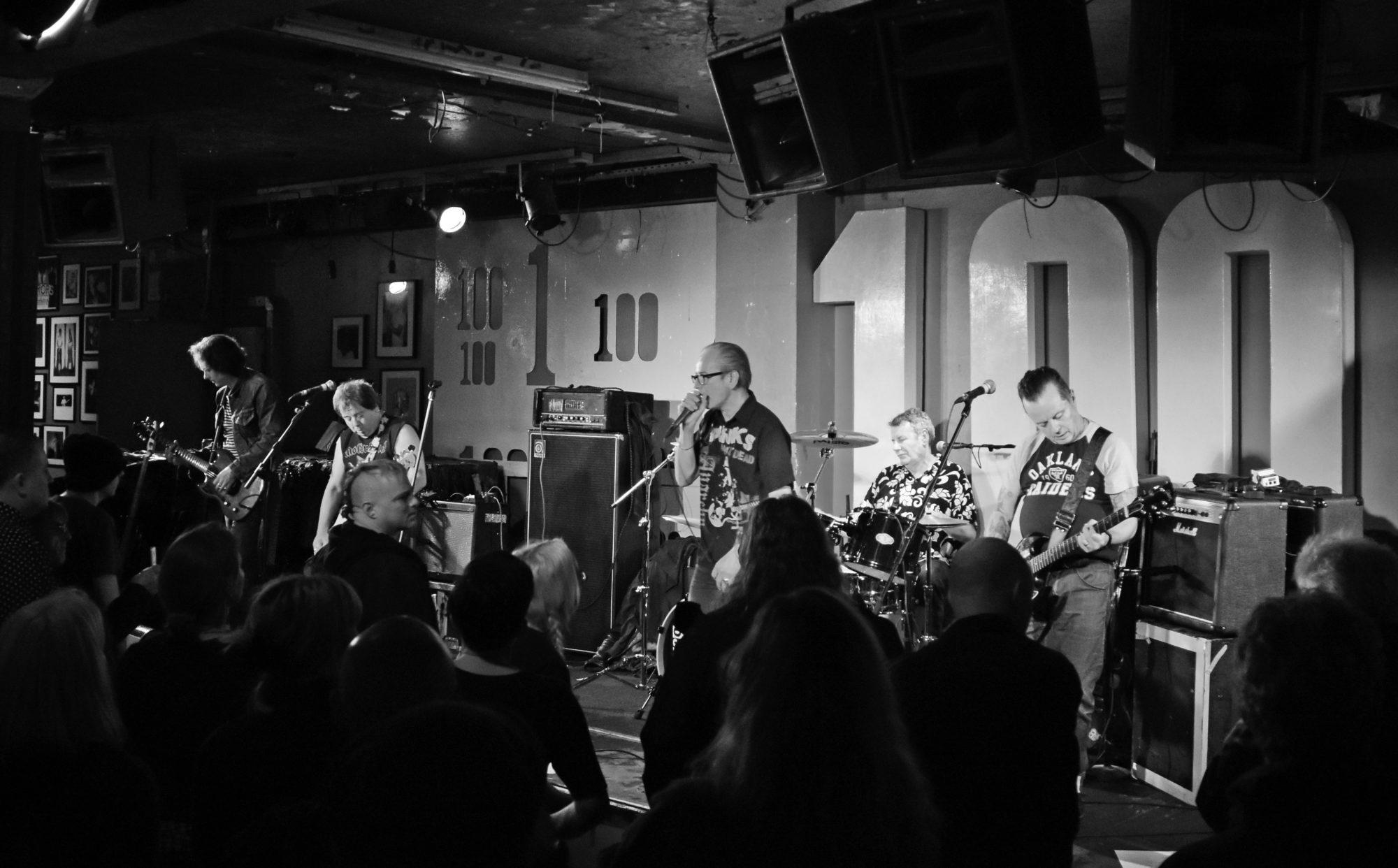 Without a doubt Burnt Rubber is a magnificent celebration of all that is great about rock’n’roll and is a true testament to what can be achieved in a DIY world. With a bunch of songs that have been knocking around for a while, this makes it clear that all you need to bring a smile to your face is a bunch of great influences, a heap of invention and a not inconsiderable amount of musical talent. Here you have it in abundance with The Phobics so miss this one at your peril. This is most definitely music to dance to!

You can find The Phobics here on Facebook or e-mail them at phobics1@aol.com.