The Personal History of David Copperfield (2019)

Release Date: Out at HOME, Manchester on the 24th January and on general release.

Jonathan Bradshaw delves into the world of a classic Dickens tale, which under the direction of Armando Iannucci, becomes a fresh tale of success and deals with relatable themes.

As someone who was taught about Charles Dickens at school, the story of David Copperfield seemed to have slipped me by. Being aware or unaware of the story doesn’t matter though, as Iannucci has crafted a story that feels remarkably fresh and current with something for everyone.

The narrative is told in a personal way by David Copperfield himself (Dev Patel), who takes us on a journey through his life and the many ups and downs he experiences. We become acquainted with the many colourful characters that populate Copperfield’s life, including con-man Mr Micawker (Peter Capaldi), and paternal guardian Betsey Trotwood (Tilda Swinton).

Iannucci extracts fantastic performances from all of the cast. A personal highlight is Jairaj Varsani, who plays the the young Copperfield. He projects an innocent and fun spirit that stands in contrast against bleak Victorian London. Patel then takes over from the kid, and carries the narrative forward with a similar spirit. 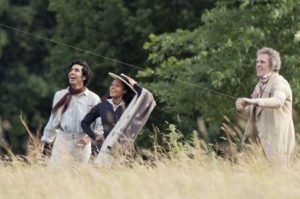 Despite the modern take, the film still retains a Victorian feel. Copperfield’s house in the country is constantly sun drenched, while his city tenement is bleak. The London here feels alive and full of progress, which Copperfield takes advantage of, finding failure and success. Keeping with the period, the countryside becomes an escape for Copperfield, as he desires to leave London to go to an upturned boat in Yarmouth that figured in his childhood.

Copperfield later makes the acquaintance of James Steerforth (Aueurin Barnard) at a school for ‘Gentlemen’. The film highlights issues of class that existed in Victorian Britain, something that separates Copperfield and Steerforth. While the concept seems dated, these themes will be relatable to a modern audience, thus giving the film a relevance. 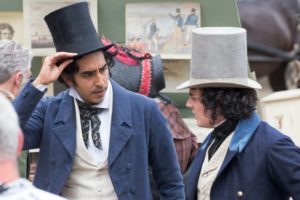 In conclusion, it’s great to see a Dickens tale on the big screen. Many directors have tackled his stories, from David Lean to Carol Reed. Iannucci, however, has created a unique adaptation that has modern facets but still feels uniquely “Dickensian”.