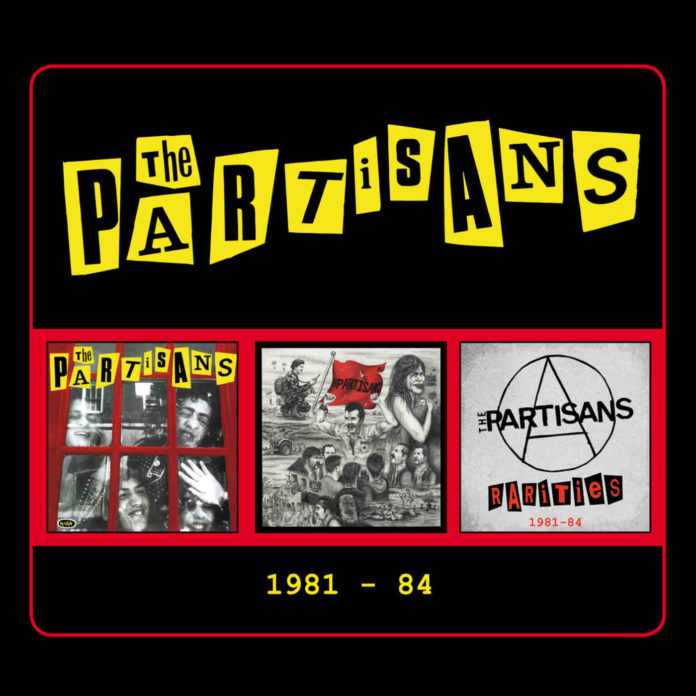 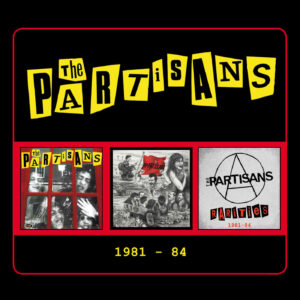 46 track boxset which houses their self-titled No Future debut LP, the half live, half studio follow up The Time Was Right and a rarities disc. LTW’s Ian Canty bears witness to the teenage Welsh wizards of 1980s punk.

If I cast my mind back to the early 80s I think it was Paul Weller who remarked that the then-current punk upsurge all seemed to be made up of people in their mid twenties. I wonder if he ever heard of the Partisans? Forming in Bridgend whilst the band members were still attending school, the original five piece line up eventually gave way when early participants singer Phil Stanton and bass player Mark Parsons left. Rob “Spike” Harrington took over on the mic and drummer Mark “Shark” Harris and guitarist Andy Lealand were joined by new bass player Louise Wright.

Evidently there were no hard feelings on Stanton’s part as he mailed the band’s first demo tape to the No Future label, who at the time were actively seeking new punk bands. The contents must have pleased Chris Berry et al as two of the tracks Police Story (not the Black Flag song of the same name) and Killing Machine were rushed out straight from the tape as the imprint’s second single. A Top Five hit on the Independent charts, Police Story also found a place on the popular Punk And Disorderly album, which surveyed the punk upswing of fortunes. A great, hyperactive song with a lyric which rallied against the constabulary’s methods, it was quickly followed by two exciting tunes Arms Race and No U Turns on the Carry On Oi! album and the even better 17 Years Of Hell single.

This 7 inch got within a hare’s breath of the top of the Indie charts and to the outside world the band looked to be thriving. This appearance was deceptive, as the band split just before they were due to record their debut album. No Future held the contract the band had signed over them and reluctantly they bashed out their self-titled debut LP in mere 24 hours. It’s the record that makes up disc one of this new set and in many ways this is an archetypal punk debut album. Full of teenage rage (actually played by teenagers for once too) and raucous musical mayhem, it is perfect really. They recut 17 Years From Hell and their Carry On Oi! tracks No U Turns and Arms Race, but apart from that all the songs were originals drawn from the Partisans’ live setlist.

The influence of the first couple of UK Subs albums are present on straight ahead punk rants like Don’t Blame Us and I Don’t Give A Fuck, but they still excite. There are less derivative efforts like the muscular mid-pace of Put You Money Where Your Mouth Is and I Never Needed You, which signposted the Partisans’ future. The latter was even recut for The Time Was Right album. But going back to the debut, their theme tune has a nice bit of buried r&b garage punk in it and the powerful build up of set closer Overdose also impresses. Overall The Partisans was a more than decent showing for a band seemingly on its last legs.

Though this version of the Partisans parted ways after that album session, it proved to be only a temporary split. Showing a doughty resilience, Spike, Shark and Andy enlisted a new bass player in Dave Parsons to replace Louise, who opted out of music. They also relocated to London and began to gig with a wider circle of punk bands than just the usual oi names. It seems ridiculous now, but then punk was split firmly into oi and anarcho and the two seldom mixed. However at this point in time the Partisans crossed over and played alongside Anthrax, Conflict and Hagar The Womb.

An excellent single called Blind Ambition was the first indication of the “new” band. This record came out in 1983 on the Cloak & Dagger label, a subsidiary of Syndicate, who were busy hoovering up the remains of the oi/punk scene back then in the wake of the collapse of Secret/No Future. A great introduction to the new band’s sound, it is tempting to say this is the Partisans’ first step away from thrash, but incorrect I feel. After all 17 Years Of Hell and Arms Race are mini-masterpieces of restrained power and Blind Ambition, though a tad more thoughtful, was really just a further progression in that direction. I can remember David “Kid” Jensen being a fan of the disc and everything looked promising for the band going into 1984.

Second album The Time Is Right appeared in the summer of that year and kicked off with the new and improved chunky riffage of I Never Needed You. There is an early Clash influence at work here, but it is far from being tribute act level. They simply documented their experiences over the past few years with early naivety being replaced by a cynical eye here and there. Only 21 and The Money Rolls In are dynamic examples of this disillusionment and very memorable ones too. Also there’s a real sense the band hadn’t given up – their trials and tribulations had made them stronger and this studio side is top drawer material all the way through.

Six songs from the gig the Partisans played with alongside those aforementioned “Crass” bands at the Brixton Ace made up side two of The Time Is Right. I’ve always thought is was a bit of a shame that for whatever reason that the live tracks take up this space, as another set of offerings of the standard of the studio side would have made for a classic album. Whether it was a lack of material or Syndicate not wanting to spring for more studio time, an opportunity was lost. However the contents are good enough as they are, showing the band as a potent live force. Though a fine record the band split afterwards, but happily reunited in the 21st century and recorded the well-received Idiot Nation LP in 2004. They still play the odd gig today.

The final disc here is what will really excite the seasoned Partisans’ fan. Starting off with their Carry On Oi! contributions, next we get 14 tracks taken from their two No Future demos. This includes all of the recordings from their two singles for the label and an early version of 17 Years Of Hell where the drums sound a bit more surf rock. Come Clean and Change from the second demo were the flips to Blind Ambition and show the direction the band was moving to actually happened in their final days at No Future. Lastly there are five mixes which should have been used on The Time Was Right LP apparently, these takes do seem to have a bit more zip. In particular the version of Time Is Right is much better than the released cut. These mixes would have made what was a strong album even better and a Partisans’ buff is going to want to at least hear them I would think.

This set is nice in that the albums are presented exactly as they were released, leaving the bonus material to a disc on its own. This really works in its favour. The Partisans were one of the very best bands to emerge in this period and unlike others hadn’t shot their bolt when the first LP was done and dusted. This set brings together both 80s albums by the band nicely and lets us see the progression as it happened. Added to that, the No Future demos and The Time Was Right original mixes are well worth hearing. The Partisans gave punk fans in the UK hope when that scene was falling apart in the mid-80s and they were really something worth celebrating which this set proves.