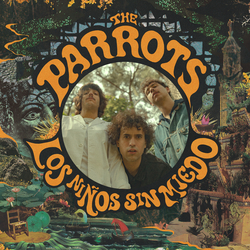 The parrots are a really lovely revelation. I have to be honest, the cover art of the CD wasn’t promising. Very 60s looking and seemingly using the same font as the legendary ‘Nuggets’ compilations, it just looked stuck in the past. And I guess, in some way they are. They wear their influences such as The Monks, The Groupies, 13th Floor Elevators, Buddy Holly and Elvis on their tattered sleeves. But, there is also a freshness to their sound that sets them apart.

According to their blurb, ‘Diego García (vocals / guitar), Alex de Lucas (bass) and Larry Balboa (drums), are a loose-hipped, primordial rock ‘n’ roll band from Madrid who met at university in the city and evolved from the same firmament of like-minded artists, photographers, DJs and musicians that recently spawned the acclaimed band Hinds’. In fact, Diego produced their recently released acclaimed album Leave Me Alone. They recorded Los Niños Sin Miedo in one week last September down by the sea in Cádiz at the studios of much-loved Spanish sound engineer Paco Loco.

Right from the start this 10 track LP has a certain sound. The first track ‘Too high to die’ starts gently, well for a minute, and then comes the feedback and JAMC wall of noise and Diego’s pained vocals. And it’s the vocals that really are one of the main aspects of this band that I love. They are pained. They seem to have lived. The vocals seem to have history that enriches their sound tenfold.

Next track ‘let’s do it again’ is slow and bassy and the vocals are phoned in. The brilliantly titled ‘No e gustas, te quiero’ has a sound like they we being dragged though a swap whilst recording it. It’s slow. It’s scuzzy. It’s very ‘Cramps’ like. It’s great.

‘A thousand ways’ again screams ’13 floor Elevators’, but it is also really tuneful and a great song. The coughing at the end of the recording is an added bonus. Lead track off this LP ‘Jame Gumb’ has a baseline that the brilliant ‘Killdozer’ would be proud of. It’s earth moving in its loveliness. Its bursts of reverb just shouts ‘The Cramps’, but it’s just a joy to listen to. ‘EA Presley’ is a tellingly influenced track that is again upbeat, albeit with the distorted vocals and a ferocious guitar solo.

‘The road that brings you home’ is a beautiful song that again has phoned in vocals, but invokes ‘Like a rolling stone’ era ‘Bob Dylan’ with a beautiful and chilled out song. ‘Windows 98’ follows quite quickly and again you get a great psychobilly stomp of a song that pretty much sums up this LP.

This band maybe backward looking in its influences, but they seem intent on taking these points of reference and merging the distortion, big reverb and classic songwriting to create an important body of work that will feed the current rockabilly/psychobilly resurgence that is currently happening. Bloody good stuff.

The Parrots return to the UK in the summer for a run of shows.